Ohio University Trombone Day 2023 will be a full day of trombone-related activities on Sunday, January 29.

Trombone Day will include a group warm-up, master classes, mass trombone choir, and a final concert.

Trombone players and brass enthusiasts of all levels and backgrounds are welcome. High school and college students are strongly encouraged to participate.

Final Trombone Day Concert is open to the public, at 4pm in Glidden Recital Hall.

Late Registration is available through January 29 and at the event. On-site registration will be available. Fee: $10

Contact Lucas Borges, Associate Professor of Trombone, with questions about this event by email at regoborg@ohio.edu. 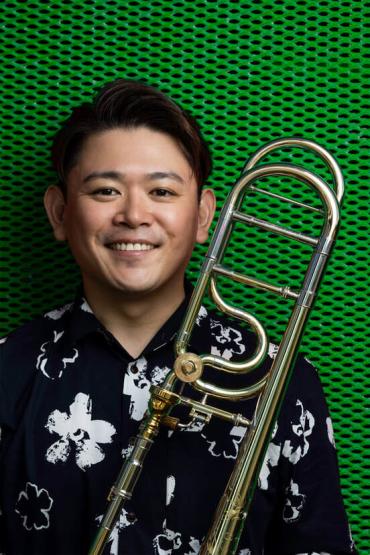 Since 2018, Yu has been focusing on solo performance after a 15-year career as an orchestral trombonist in Japan, the USA and Europe. Currently focusing on giving recitals, concerto appearances and master classes, he has made appearances in Japan, the USA, Denmark, Czech Republic, France, Germany Italy, Norway, South Korea, Sweden, Switzerland, Taiwan, Turkey, and the UK.

His first album Love and Chaos was released in 2018. His second album, Colors for Trombone, and first single, Game from An;G;El, were released in 2019 and are both available on iTunes/Apple Music and other major streaming services.

In addition to his contributions as a performer, Yu has has been conducting educational workshops and master classes for young professionals since 2014. Workshops have been sponsored by the Tokyo metropolitan government, Pro Arte Musicae, and the Shinjuku ward office of Tokyo, where he continues to instruct students and help guide them in their musical careers. Having had the opportunity to both study and perform trombone all over the world in Asia, Europe, and North America, Yu is able to offer a unique perspective and broad understanding of trombone performance to the next generation of musicians.
​
Yu's passion and gift for sharing the human experience through music is evident not only in his expressive performance but also through his numerous collaborations and educational endeavors. Yu Tamaki Hoso is leaving his mark on the world one note at a time.