The program is vigorous and comprehensive and is designed for highly motivated individuals who prefer a more independent, individualized program of study. Students should have a potential for self-motivated undergraduate study within the environment of a graduate film school.

Curriculum goals must include breadth of experience, depth in the selected area of concentration, and superior achievement demonstrated by tutorials, coursework and the thesis. Two primary tutorial programs are available: film production and film studies.

There are five elements to the tutorial program in Film:

The nature of the film medium requires a broad background in liberal arts and a multidisciplinary approach to learning. Students are expected to select 12 credit hours of elective courses in history, English, media arts and studies, comparative arts, foreign languages, and other disciplines.

Production and scholarship courses in film

Breadth of understanding can often best be achieved through practical courses in film and video production and courses in film scholarship. Because film is a collaborative art, tutorial students will join with other students in appropriate courses.

The student will plan a cognate minor consisting of three courses outside the Film Division. These courses will be chosen according to the individual plan developed by the students with the Director of Studies. Students wishing, for example, to enter careers in producing or arts administration might complete a cognate minor in management, accounting, or business.

Each HTC Film student is required to complete a thesis, which may take the form of a completed film, or feature-length screenplay. Students completing a creative project will also to be asked to write an accompanying scholarly paper as part of their thesis.

The topic and scope of the thesis is approved by the Director of Studies and the Thesis Advisor no later than the beginning of Fall Semester in the student's senior year.

The Director of Studies assigns tutors in accordance with the student's interests and, in consultation with the student, develops an individual plan of study leading to the degree of Bachelor of Fine Arts in Film.

Admission requirements include submission of a portfolio of recent creative work and a recent substantive writing sample. (Creative writing projects fall into this category.)

The deadline to apply for admission is November 15th. Please submit all artwork on labeled DVD or video tape; the school cannot accept original artwork. 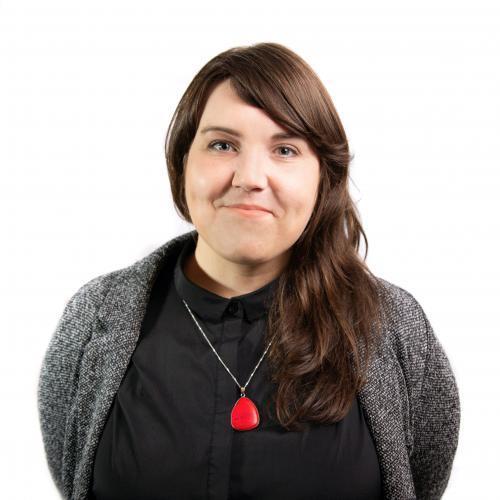 Lindsey Martin's films are humorous, sometimes dark looks at the inner workings of families going through crisis, often embracing the absurd. Her interests are in locations and how humans connect to the places they are from; in cyclical patterns of generations of women living in poverty in rural America and the bizarre tactics individuals, especially young girls and women, design to cope with traumatic experiences. Using traditional narrative structures as the initial framework for her films, Lindsey mixes in changing visual modes through different animation techniques.  Her work has screened nationally and internationally at both festivals and conferences including the Slamdance Film Festival, the Philadelphia Institute of Contemporary Art, the Athens International Film and Video Festival, San Francisco Doc Fest and Cleveland International Film Festival. She is currently Assistant Professor of Film Production at Ohio University.