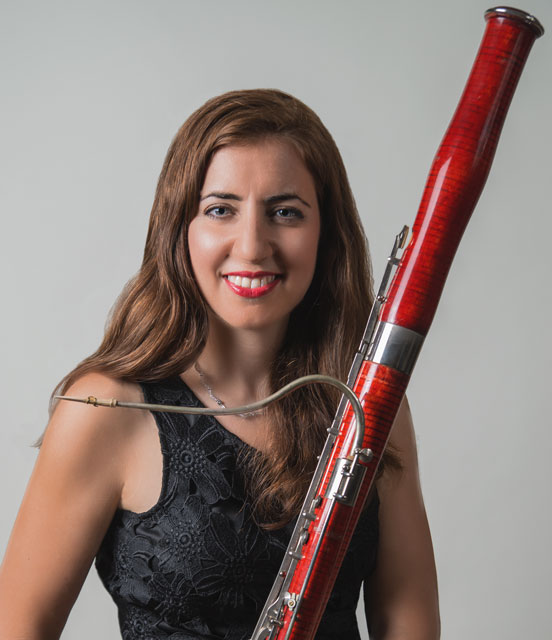 Bassoonist Gina Cuffari is a dynamic and versatile artist who performs with many ensembles in the New York City area. Praised for her “sound that is by turns sensuous, lyric, and fast moving” (Palm Beach Daily News), Gina is Co-Principal Bassoonist of the Orpheus Chamber Orchestra and a member of the Lincoln Center-based Riverside Symphony. She frequently appears with the Orchestra of St. Luke's, American Composers Orchestra, Westchester Philharmonic, American Ballet Theater, Iris Orchestra in Memphis, TN, and many more. In addition, she has subbed on Broadway productions which include Fiddler on the Roof, Sunset Boulevard, and My Fair Lady.

An avid chamber musician, Gina is a member of the Jupiter Symphony Chamber Players, Sylvan Winds and founder of Trio Cabrini. She has played with the renown west coast-based ensemble Camerata Pacifica, and is a recent addition to the artist roster of the Boston-based Walden Chamber Players.  Gina is also a champion of new music, and is a frequent collaborator with Alarm Will Sound. A passionate educator, Gina is an Adjunct Professor of Bassoon at New York University and Western Connecticut State University, and is a regular guest clinician at Bard College for The Orchestra Now.

Gina is also a versatile singer who enjoys performing in many different styles. From classical to musical theater to jazz/pop/r&b, she loves it all, and has professional experience performing in all genres. In a New York Times review of the Jupiter Chamber Players, Allan Kozinn said, “Gina Cuffari, a soprano (though she is usually the group’s bassoonist), sang them (set of Toscanini songs) with the right balance of gracefulness and passion.” Gina’s current passion project is commissioning new works which integrate both voice and bassoon into one performing experience.