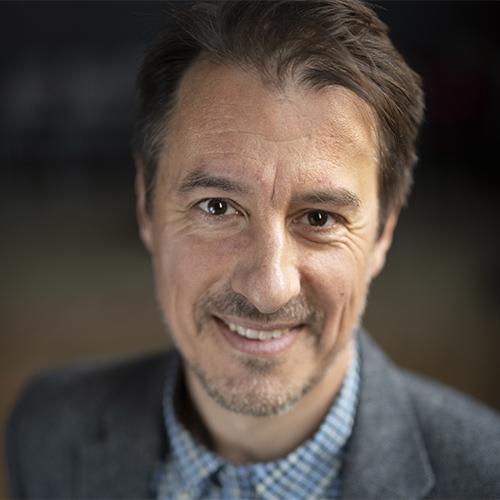 Dr. Daniel C. Dennis is an actor, singer, director, music maker, sound designer, researcher, and teacher, whose work has been seen in NYC, Chicago, Seattle, and in many places throughout the U.S., as well as in South Korea, Spain, and Kenya. As an actor, he has worked for Seattle Children’s Theatre, Intiman Theatre, Seattle Opera, Village Theatre, Seattle Shakespeare Company, Book-It Repertory Theatre, UMO Ensemble, and many other companies. He has directed music and created original sound scores for dozens of productions from classic to contemporary plays, musicals, adaptations, multimedia and interdisciplinary work, and many world premieres. Favorite directing credits include A Midsummer Night’s Dream, Little Shop of Horrors, Urinetown the Musical, bobrauschenbergamerica, Into the Woods, Oliver!, and A Child’s Christmas in Wales. He is one half of the singular experience known as STARBALL, an immersive, largely improvised music theater event for the planetarium. He is the former founding artistic director of Ohio University’s professional theater company, Tantrum Theater.

For Ohio University, Dr. Dennis has taught graduate and undergraduate courses in voice and speech, movement, acting, musical theater, sound design, creativity and collaboration, performance theory, applied theater, and interdisciplinary arts. He earned his MFA in Theatre Pedagogy in 2008 from Virginia Commonwealth University, where he served on the board of the Shafer Alliance Laboratory Theatre and created VCU’s No Shame Variety Show, a bi-weekly, student-led performance opportunity that continues today. He earned his PhD in Interdisciplinary Arts in 2013 from Ohio University, where he received the prestigious Claude Kantner Graduate Fellowship to complete a dissertation on the relationship between sound design and acting in the work of the SITI Company. He has studied and trained with Anne Bogart/SITI Company, Phillip Zarrilli, and Jill Dolan. He served as co-chair of the Practice/Production Symposium of the Mid-America Theatre Conference, his writing is published in the journals Theatre/Practice and Theatre History Studies, and he is a proud member of Actors’ Equity Association.