From astronauts to elders, Brian Clark studies how we stay strong 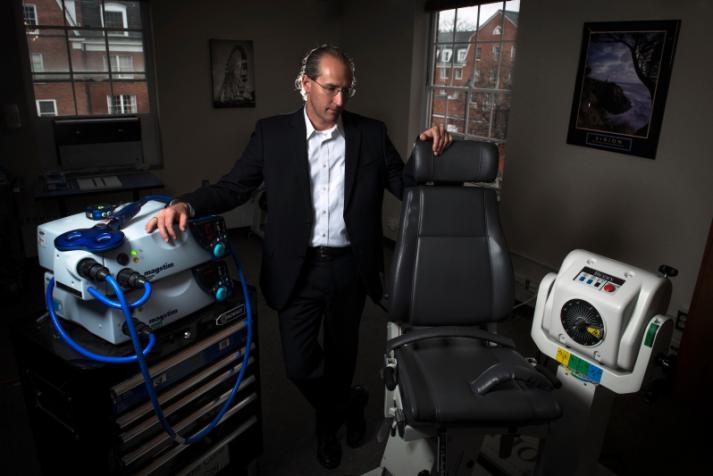 Brian Clark, Ph.D., came to our medical school in 2006 as an assistant professor of physiology and neuroscience, fresh out of graduate school at Syracuse University. He admits now that he arrived expecting to quickly migrate somewhere else.

“I always joke that when I came to Athens, I did not anticipate staying very long,” says Clark. Rather than moving on, however, he has risen to be a full professor, executive director of the Ohio Musculoskeletal & Neurological Institute, holder of the Osteopathic Heritage Foundation Harold E. Clybourne, D.O., Endowed Research Chair and an internationally recognized authority on healthy aging.

It wasn’t that Ohio University and Athens didn’t suit Clark’s younger self; he just feared that he couldn’t find enough volunteers in a small rural community for the kinds of clinical research studies he wanted to do. Instead, he recalls, “I was just flabbergasted by what strong support members of the local community give to research projects.”

Over the years, he has become friends with many of the people who have volunteered for his aging-related research studies. One reason is probably the deep commitment to the safety and comfort of study subjects that’s instilled in OMNI staff at all levels.

“My philosophy has always been, when somebody is volunteering for a study, the key word is ‘volunteering,’” Clark says. “So we do everything in our power to make it a positive experience.”

When Clark started at the Heritage College, his research focused on the effects and causes of muscle fatigue and the effect of prolonged disuse on muscles. Because astronauts on prolonged space flights can suffer such effects, NASA was an important funding source for his early work.

While Clark had long had an interest in aging as a health issue, his research wasn’t focused in this area until NASA moved away from supporting investigator-initiated muscle-disuse studies shortly after his arrival at the medical school. This prompted Clark to look for a field of research in which his expertise could come into play and which could attract support from the National Institutes of Health. Healthy aging fit the bill.

As the percentage of seniors in the U.S. population has grown, NIH has sought ways to help keep the elderly mobile, self-sufficient and out of nursing homes. And the phenomenon of muscle pain and wasting through disuse, which Clark had already been studying, in some ways parallels what happens to our muscles as we age. “It’s actually a model of aging to some extent,” he explains. He took to the new research agenda enthusiastically – and quickly caused something of a shake-up in the field.

At that time, most scientists who studied aging believed they should look primarily at the muscles themselves to understand loss of muscle strength and function in the elderly. Though research dating from the 1970s and ’80s had shown that the nervous system “is a very heavy contributor to muscle function,” Clark says, the aging research community still “basically saw the muscles as the prime culprit in muscle function losses.”

Clark – who maintained that the neuromusculoskeletal system was a better, more holistic subject for research – took a deliberate step toward refuting the consensus view when he and colleague Todd Manini from the University of Florida College of Medicine, Gainesville, published a paper in the Journal of Gerontology, which they intended as something of a shot across orthodoxy’s bow. “We tried to write it in a pretty provocative way,” Clark admits.

Titled “Sarcopenia ≠ Dynapenia,” the article argued that sarcopenia (age-related loss of muscle mass) and dynapenia (loss of muscle strength with aging) are two very different things, and that the first is less a cause of the second than many scientists then believed. Instead of assuming that age-related loss of muscle mass equates to loss of strength, the authors suggested, researchers should be looking at other mechanisms that might underlie dynapenia, including changes in neurological function. In other words, the brain and nervous system may be major players in the process.

The 2008 paper, and a follow-up article in 2011, have had their intended impact in shifting scientific perspective, Clark says, and since their publication have been cited more than 1,000 times. They also mapped out a research territory that Clark and OMNI have made their own, and that has helped make Clark one of the college’s top translational scientists.

The entity now known as OMNI was created in 1979, and was originally known as the Somatic Dysfunction Research Institute; from 1979 to 2008 it was under the direction of John Howell, Ph.D., associate professor in the Department of Biomedical Sciences. Clark credits Howell’s vision for the institute’s growth with laying the groundwork for its future advancement; he also pays tribute to the foundational work of Bob Hikida, Ph.D.,distinguished professor emeritus of microanatomy; and exercise physiology and anatomy professors Fritz Hagerman, Ph.D., and Gary Dudley, Ph.D., both now deceased.

Since Clark took over as head of OMNI upon Howell’s retirement in 2008, the institute has grown into a powerhouse of research, whose two main areas of focus are pain disorders and healthy aging.

From 2014-2018, OMNI attracted close to $11.5 million in external funding – 93 percent of its total funding for the period. It’s consistently one of the best externally funded institutes at Ohio University. This support has come most heavily from NIH, but also from the state of Ohio, private industry and the Osteopathic Heritage Foundations. OMNI’s principal investigators and junior scholars published 204 peer-reviewed PubMed articles with an OHIO affiliation during this time – up 39 percent from the previous five years.

With over 110 published journal articles or book chapters to his credit, Clark’s research has illuminated the role of neurology in muscle function and assessed the effectiveness of drug and exercise interventions in helping seniors retain muscle strength and mobility. In addition to scholarly outlets, his work has caught the attention of the popular press, earning write-ups in major media outlets including the New York Times, Scientific American and The Atlantic.

When he shifted his focus into healthy aging studies, Clark says, it headed him down a path of discovery that he still finds deeply rewarding every day.

“I can easily say that the aging work is what keeps me excited, and engaged, and happy to come to work,” he says.