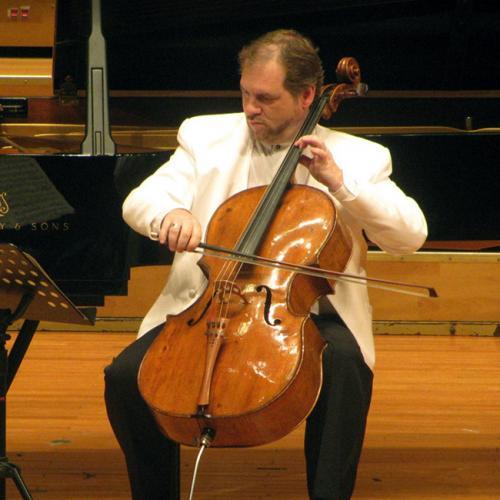 Cellist Michael Carrera has performed in some of the world’s greatest concert halls as a chamber musician, concert soloist, and recitalist. He made his Carnegie Hall debut in 2001 to great critical acclaim. He has played at Town Hall in New York City, Wigmore Hall in London, at the Rheingau Festival in Germany, and many other festivals in the United States and across Europe. He has performed live on radio at Germany’s MDR, France’s Radio 3, National Public Radio in the US, and television broadcasts in just as many countries. He performed a solo broadcast specifically for “NPR’s Performance Today” in New York City of the musical and theatrical adventure of Bernardo’s Farewell.

Michael is the Artistic Director of the Juniper Music Festival, where international artists come together to give concerts, masterclasses, and lectures for under-represented communities across the United States. Since 2002, this festival has reached out to children and adults alike who would normally not have access to great music and famed musicians. Throughout his travels, he has performed alongside Pinchas Zukerman, Ivry Gitlis, Emanuel Borok, Peter Rejto, Pamela Frank, Robert DeMaine, Orli Shaham, Peter Takacs, and many others. He has performed with chamber groups and individual musicians from the Tokyo, Borromeo, Cleveland, Guarneri, American, and Emerson String Quartets. Michael regularly toured Asia, Eastern and Western Europe, and parts of South America, giving concerts and master classes at music conservatories and schools, as well as acting as a judge at international competitions

Michael has recorded numerous commercial discs for New World Records, VOX Records, Summit Records, and Equilibrium Records. He has performed as a member of the Arcata Quartet in the world premiere of Paul Chihara’s Concerto for String Quartet and Orchestra, Kisses Sweeter than Wine, with the Utah Symphony and conductor Keith Lockhart. Miklos Rozsas Sinfonia Concertante for violin, cello and orchestra with the National Symphony Orchestra of Moldova, and a CD entitled “Sticks and Stones” for percussion and strings. Specifically Tan Dun’s “Elegy: Snow in June”, concerto for Cello and Percussion Ensemble. This last CD is now considered one of the authoritative performances of this specific work by Tan Dun.

Michael studied with cellists Lynn Harrell, David Geber, and Peter Rejto. He also studied chamber music with the late Isidore Cohen – former member of the Beaux Arts Trio and the Juilliard String Quartet. Michael’s degrees come from The Manhattan School of Music in New York City and University of Arizona. Michael currently serves as faculty at Ohio University in Athens and the Montecito Summer Chamber Music Festival in California. Every year, he invites one guest artist for a residency at Ohio University. These have included Janos Starker, Robert DeMaine, Peter Rejto, Andres Diaz, and the Tokyo String Quartet. Michael serves on the faculty at the Montecito Music Festival in Santa Barbara in the summers.

Michael performs on a rare cello made in Italy in 1720.