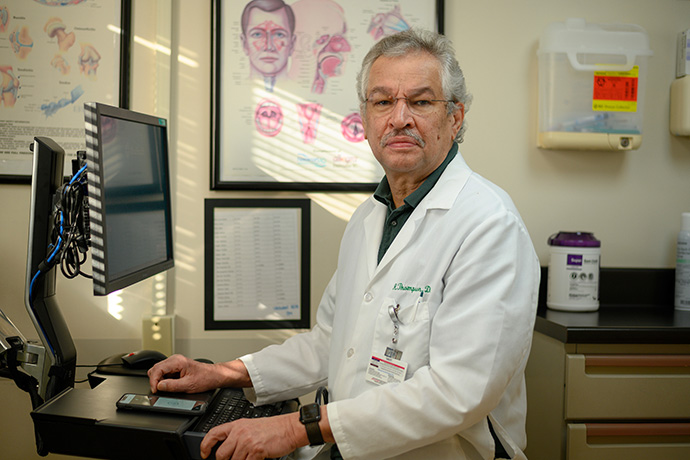 When Harold Clayton “Clay” Thompson III, D.O., first laid eyes on Athens County, Ohio, in 1977, he was recently married, a year out of medical school in Chicago, and fresh from an internship at a New York hospital. He figured he’d put in some time in the emergency department of Mt. St. Mary’s Hospital in Nelsonville, and sooner or later head back home.

“I just came out to look,” he recalled. “I’m from Chicago, and in my mind, I was always making my way back to Chicago.”

More than 40 years later, he and his wife, Tanya, still live in Athens. And Thompson has earned a place in the history of both southeast Ohio and the Heritage College as an engaged community doctor, medical educator, pioneer of diversity and mentor to many future osteopathic physicians.

“I’m very pleased that I’ve gotten to live in Athens,” he said. “Because I’ve gotten such an education, and I’ve been able to share it.”

When he was hired in 1979, he became the college’s first African American faculty member, as well as being perhaps the first degree-holding Black physician to practice in Athens County. (According to the book “Stories of Medicine in Athens County, Ohio,” by Heritage College faculty member Gary Cordingley, M.D., Ph.D., one African American doctor practiced in the county earlier, in the mid- to late 19th century, but may not have had a medical degree.) In 2013 the Ohio Osteopathic Association bestowed upon Thompson its highest honor, the Distinguished Service Award.

A transplant puts down roots

For a Chicagoan, practicing in rural Ohio took some getting used to – Thompson had to learn about farming accidents, for example – but he put down strong roots as a community physician. He co-founded the Express Care Clinic in Athens and served for a time as medical director of the county jail. In 2008, he was elected county coroner, an office he held through 2014. His connection with the medical school, meanwhile, has been as deep and durable as it gets. “I have been here for literally every graduating class they have ever had,” he noted.

Many still remember Thompson as a longtime voice of Family Health, a short radio segment produced at the WOUB Center for Public Media, which answered questions about health and health care. Thompson took over the job from former college Dean Frank Myers, D.O., now deceased, whom he praised as “the Michael Jordan of the radio show.” When the program went off the air in July 2012, it was reaching an estimated 11 million listeners worldwide.

During his years teaching emergency medicine (he’s recently retired at age 71), Thompson was a forerunner in promoting diversity and inclusion. In fact, when the Heritage College launched its Office of Inclusion in April 2018, one speaker even pointed out that foundations for the office had been laid more than 30 years before by a handful of pioneers, including Thompson.

The college was only a year old in 1977, when Thompson came to work in the emergency department at Mt. St. Mary’s. When O’Bleness Memorial Hospital in Athens later contracted with the college to have it provide the hospital’s emergency medical services, he began working full-time there.

Remarkably, while serving at Mt. St. Mary’s, Thompson also opened a family practice in Nelsonville with two physician colleagues. In the E.R., he said, “we would work 24 hours on and 48 off, like the fire department,” then cover the clinic during off hours. Wasn’t this a grueling schedule? “You were young; you could do anything,” he mused. “We worked very hard.”

Soon enough, Dean Myers asked him to join the medical school faculty. He hesitated at first, but on the advice of “somebody wiser than I,” Thompson accepted the offer.

From his first days in Athens, Thompson was alert to diversity issues in the college and community, recognizing that whether he chose to or not, he would serve as a role model. “I knew of Black folks in Athens who carried my picture in their wallet before I came here to practice, because they saw it in the paper,” he said. “And (as a faculty member) I realized I was asked to do certain things because I was supposed to quote-unquote ‘represent.’”

He was also aware, though, of the bigger picture of inequality in health care and beyond. “When you look at the history of medicine, representation for diverse groups has not been important,” he noted. “I’m a child of the ’60s – I came through the time of the Black Panthers, Malcolm X and Martin Luther King, so I was aware of those kinds of issues.” When he joined the Heritage College, he recalled, “we didn’t have a lot of underrepresented minorities. And it became obvious to me that sometimes those students were treated a little differently.”

Thompson helped change that. During the 1980s, he worked with the Health Career Opportunities Program, an early pipeline program that aimed to encourage high school and college students from underrepresented minority backgrounds to consider medical school and support them in pursuing health careers.

He served as director of the college’s Center of Excellence for Multicultural Medicine and its Program ExCEL, which sought to increase URM enrollment through active recruitment of African American, Native American and Hispanic students. In 1994, largely in recognition of his work with Project ExCEL, Thompson was honored with an award from the university’s chapter of Kappa Alpha Psi fraternity, a social organization that recognizes professionals who show exceptional teaching and advising skills within the African American community. In 2017, the Ohio Commission on Minority Health honored him with a minority health leadership award.

Helping one student at a time

Thompson has also made an impact on a more personal level, providing one-on-one support and counsel to students from a variety of backgrounds, with a special focus on URM students.

“I can remember him inviting us over to his house, meeting his wife and having the important, necessary conversations,” said Robin Newburn, D.O. (’93), who’s now assistant clinical professor of family medicine at the Heritage College, Dublin. “He would tell us, ‘There aren’t that many of you guys, and I’m here for you. And you may experience some things that the majority students won’t experience.’ He was kind of that resource person for us.”

His mentoring wasn’t exclusive to any one set of students, though. Thompson has been drawn to help any student who’s struggling; he’s a strong believer in second chances and the power of an encouraging word.

“You’re so scared as a medical student – you make one mistake, and you think your life is over,” he said. “I tell students, ‘The world is your oyster – you can just about do anything you want. My job as a faculty member is to help you to be successful.’ And we’ve had students fail, come back and then just soar.”

One former student who values Thompson’s support is Brian Wallace, D.O. (’08), now a successful orthopedic surgeon in Florida who has worked with athletes including the Cincinnati Reds baseball team. Thompson’s guidance helped him find a niche in medicine that he loves.

“He was excellent in terms of helping me pick a specialty, figuring out what would fit best for me and really motivating and pushing me,” Wallace said. “I guess from a medical school standpoint, you decide if you’re going to be a medical person or a surgical person. And he helped me figure out that I would probably be better suited for a surgical sub-specialty because he was an emergency medicine physician, and I’d considered that as well. But he discussed sort of the pros and cons of that, and it really helped clarify to me that I’d be better in surgery, and more specifically in orthopedics.”

Part of the message Thompson has conveyed to students is the need to think hard about what they really want to accomplish as a doctor – and when they get help, to pay it forward.

“When I think of him, one of the most significant things I think of is that he always taught us about the importance of giving back,” Newburn said. “So whatever institution educated you, it’s important to continue to be a mentor to students coming in, and especially from an underrepresented minority perspective. He imparted to us, ‘Hey, when you guys get out there, be that mentor to those URM students.’”

For his part, Thompson said he’s proud of whatever he’s been able to do to clear barriers to student success and considers it all part of being a physician. He also stresses that he hasn’t done it alone.

“We’ve had so many good people here who really want to help students,” he said. “And that’s why I went into medicine, to help."