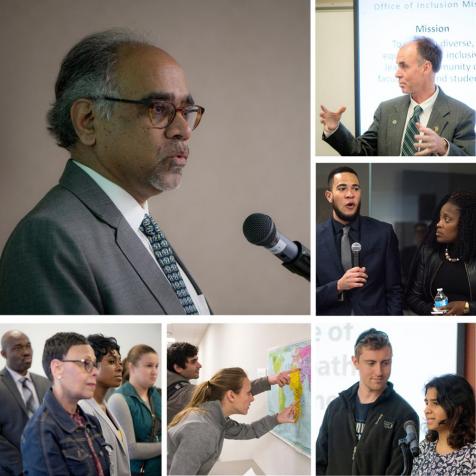 The Ohio University Heritage College of Osteopathic Medicine celebrated the launch of its new Office of Inclusion with open house events on each of its three campuses April 10-12.

Calling the creation of the office – which has dedicated staff in Athens, Cleveland and Dublin – one of the college’s most significant achievements during his tenure, Heritage College Executive Dean Ken Johnson, D.O., said that the college’s dedication to providing diversity-related resources to students, faculty and staff is not new.

“Our medical school has always been deeply devoted to diversity and inclusion,” Johnson said during the Athens event in Grosvenor Hall. “That has really been woven into everything we do.” He noted that former Heritage College Dean Barbara Ross-Lee, D.O., was the first African American woman dean of a U.S. medical school, and that the college embraces a broad view of diversity that includes demographic dimensions like race, age, gender, physical ability, socio-economic background, sexual orientation, and diversity in cognitive and conflict-management styles.

Dr. Johnson pointed out that before he was hired in 2012, the Heritage College had had diversity-related programs in place, many operating out of its Center of Excellence for Multicultural Medicine, but as key personnel retired or otherwise left the university, these efforts had lost important champions. A handful of disturbing incidents in a short period of time – including racist graffiti on an Athens campus wall and a medical student’s encountering racism in a clinical setting – showed the need to actively confront diversity issues, Johnson said.

“Conceptually, I put a stake in the ground, and said, ‘We have got to do something, something significant, with this,’” he recalled. Armed with a promise of support from then-OHIO President Roderick McDavis, Ph.D., Johnson put out a message, expressing fear that the college was becoming “a culture of silence,” and calling for “a culture of dialogue.” The initiative that led to the launch of the inclusion office, he said, started with medical students, who submitted a list of recommendations to him.

Johnson invited Dr. Nagesh Rao, special advisor on inclusion and faculty affairs, to design and implement an inclusion office. Rao created an advisory group of students, faculty and staff from all three campuses to draft an action plan. Thanks to their cooperative effort and Johnson’s leadership and vision, he said, the office came into being just 12 months after the executive dean put his “stake in the ground.” ­

James said foundations for the new office “were laid more than 30 years ago,” by the work of such pioneers as Pat Gyi, former director of equity programs for the medical college; Harold Thompson, D.O., the college’s first African American faculty member; Pat Burnette, Ph.D., retired assistant dean of student affairs and assistant professor of family medicine; and former Ohio administrator Charlene Smith, Ph.D. James promised that existing diversity-related programs will not be superseded, but serve as pillars supporting the new office.

OHIO interim Executive Vice President and Provost Elizabeth Sayrs, Ph.D., congratulated the medical school for “translating such a noteworthy idea into visible action.” Changing demographics in Ohio and the nation make it crucial to train a diverse and culturally sensitive workforce of primary care physicians, she said, predicting that the Heritage College “will play a key role in meeting this need.”

Jenny Hall-Jones, Ph.D., OHIO associate vice president and dean of students, suggested that the Heritage College’s commitment to diversity will have a ripple effect outside the college. “Health care is a social justice issue. It absolutely is,” she said. “And I congratulate HCOM for being in the forefront of that.”

Jason Pina, Ph.D., OHIO’s vice president for student affairs and interim chief diversity officer, praised the many people who have made the Heritage College Office of Inclusion a reality and warned that the kind of work it will do is “hard work; it’s never-ending work.” Pina said that in promoting diversity and inclusion, OHIO “does some of the things that people are winning awards for” at other institutions, calling for the university to promote its own efforts on a national level.

During the Athens celebration, Shilpa Krishnan and Nicholas Lehan, second-year medical students at the Heritage College, Athens, provided a view from the student level of the importance of dialogue around diversity. “As student doctors, we face the issue of diversity and inclusion every day,” Krishnan said. “We want to be, as future physicians, the most inclusive we can possibly be.”

Lehan said students are proud to be part of the initiative. “This is a huge college-wide thing, campus-wide thing, worldwide thing,” he said. “It’s been breathtaking.”