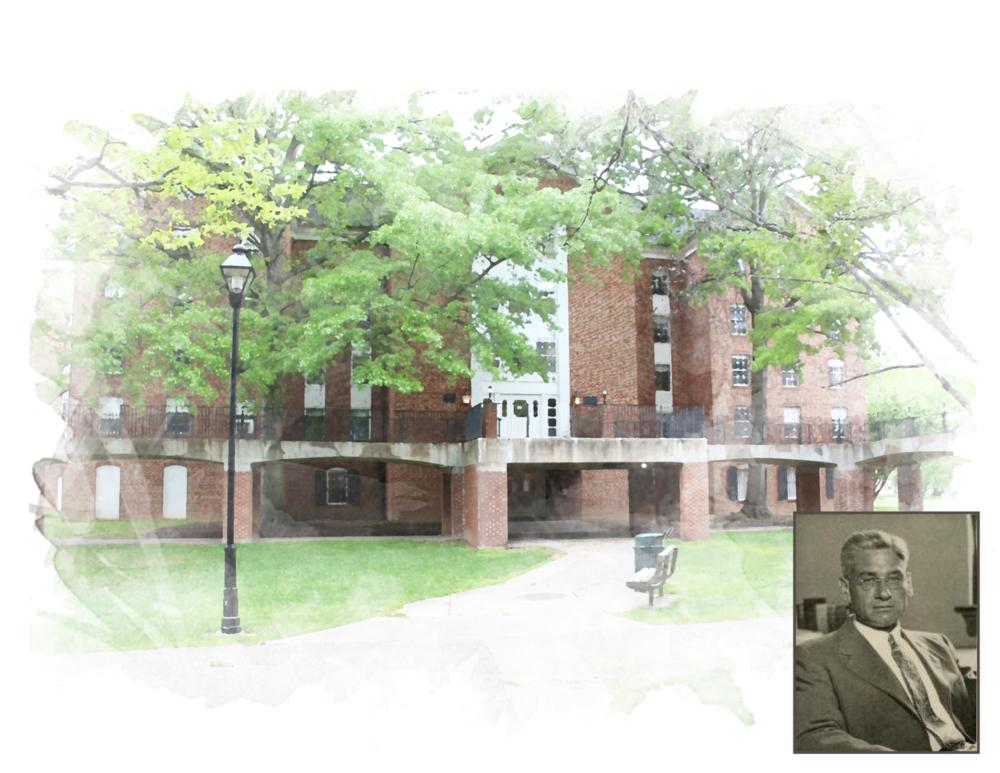 Adolph Armbruster was instrumental in establishing a nationally recognized business college at Ohio University. He served as a professor of finance and as the director of the School of Commerce. One year before his death in 1951, the business college was voted into full membership in the national accrediting organization for business schools. Armbruster was also responsible for establishing Beta Gamma Sigma, the professional fraternity within the College of Commerce. 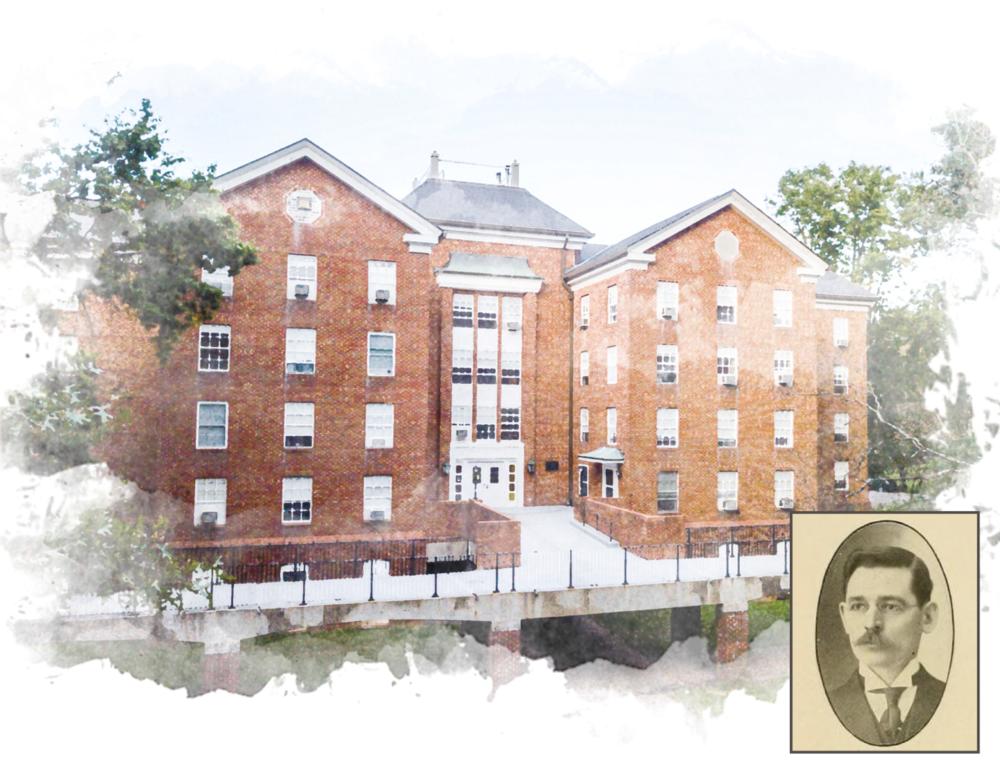 Albert Atkinson was a highly respected Ohio University professor and scientist. A graduate of the class of 1891, Atkinson was among the first to complete the educational program in electrical engineering. During his first year on faculty, his students installed the first running water system on the campus by installing a pump on the Hocking River. Atkinson was a member of numerous scientific and professional organizations and authored three textbooks. He earned the rank of professor of physics and rose to dean of the College of Applied Sciences by the completion of his 44-year career. 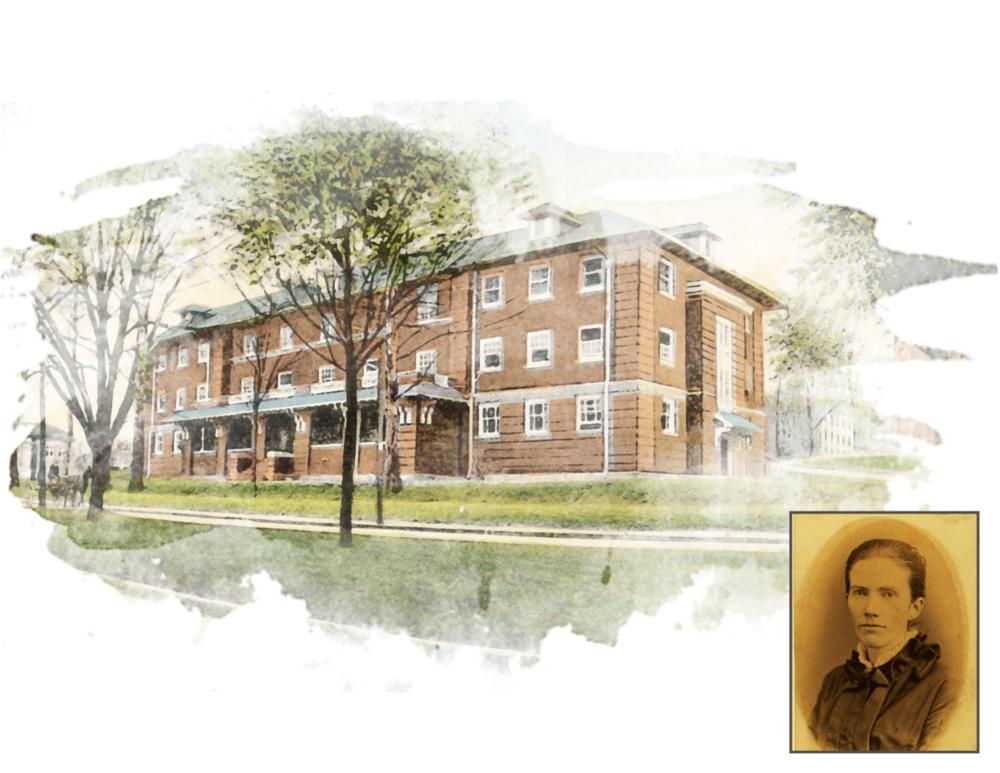 Margaret Boyd was the first female student to be admitted and to graduate from Ohio University. Following her graduation in 1873, Boyd taught high school in Ohio and Indiana, and served as faculty of the Wesleyan Female College in Cincinnati, Ohio.

Boyd Hall was constructed to house the increasing numbers of women enrolling in the University’s new Normal School for teaching in the early 1900s. As the University’s landscape changed, Boyd Hall was demolished in 1966 to make way for Alden Library. An ever-important part of University history, Margaret Boyd’s namesake was then transferred to a new residence hall on West Green. 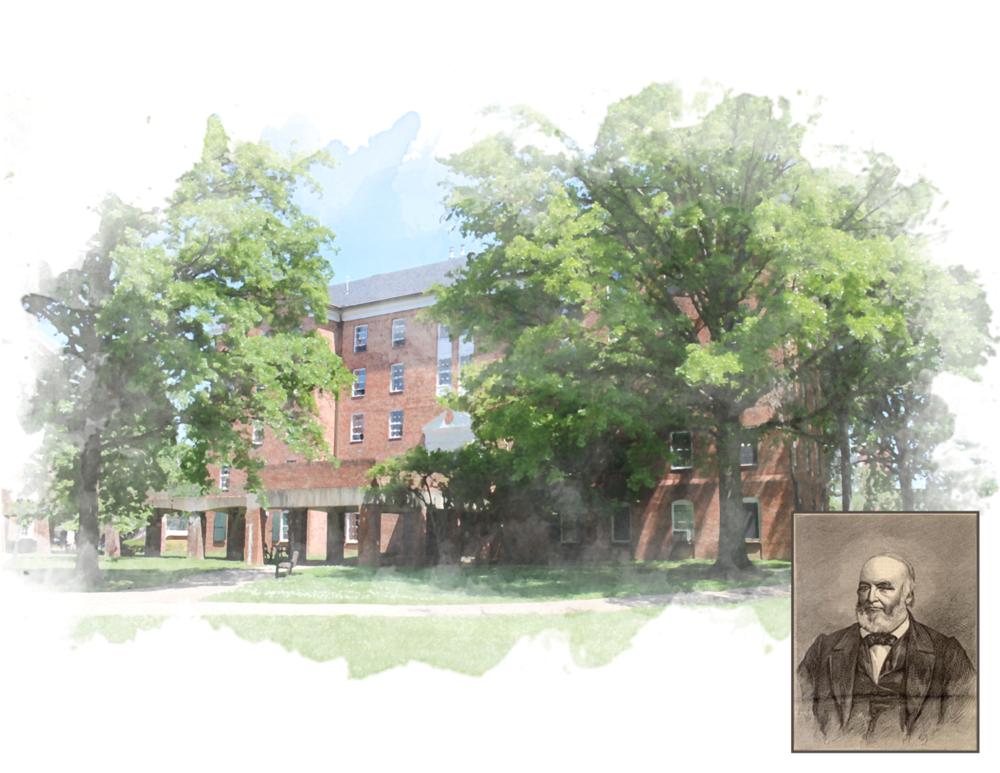 John Brough studied at Ohio University and served as the governor of Ohio during the Civil War. During his time at the University, Brough was known as a football legend, supposedly kicking a football over the top of Cutler Hall during his time as a student. After leaving Ohio University, Brough began a life in publishing by starting his own newspaper, The Western Republican, in 1831. Over the course of his life, Brough purchased multiple newspapers, notably one in Cincinnati, Ohio, which he renamed the Cincinnati Enquirer in 1841. Brough served as a member of the board of trustees from 1840 to 1843. 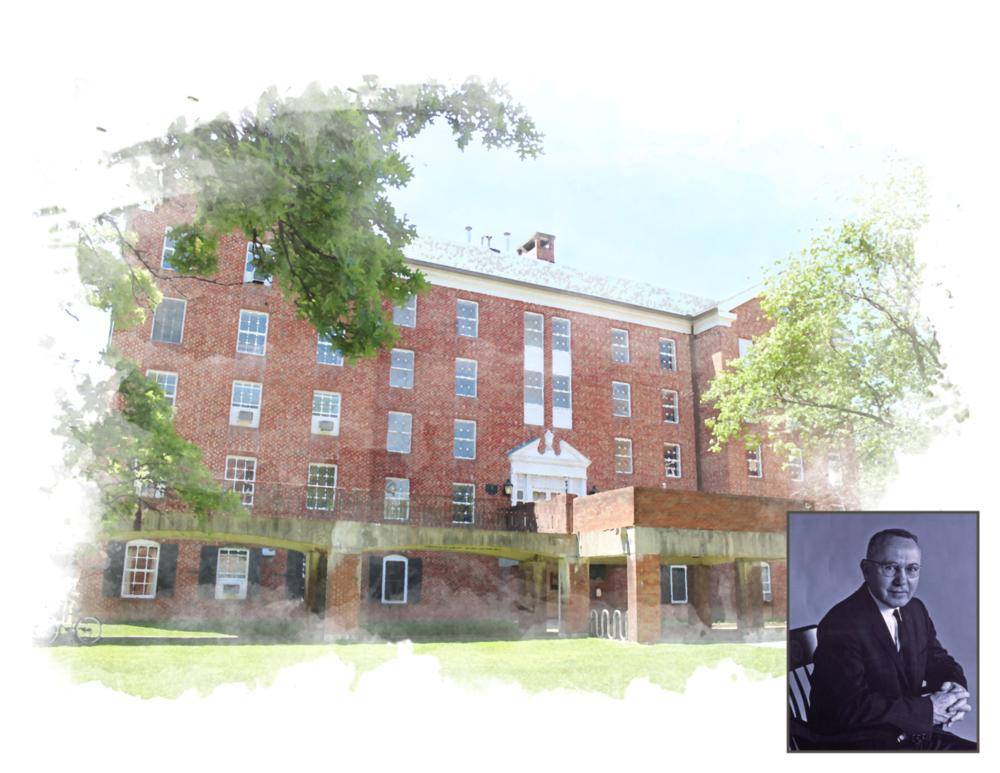 John F. Cady was a nationally esteemed professor of history at Ohio University from 1949 to 1971. While Cady was not an Ohio University graduate himself, he brought international status to campus by having internationally recognized authority on the Far East. He also served in World War II as an analyst for South East Asia through the Office of Strategic Services. 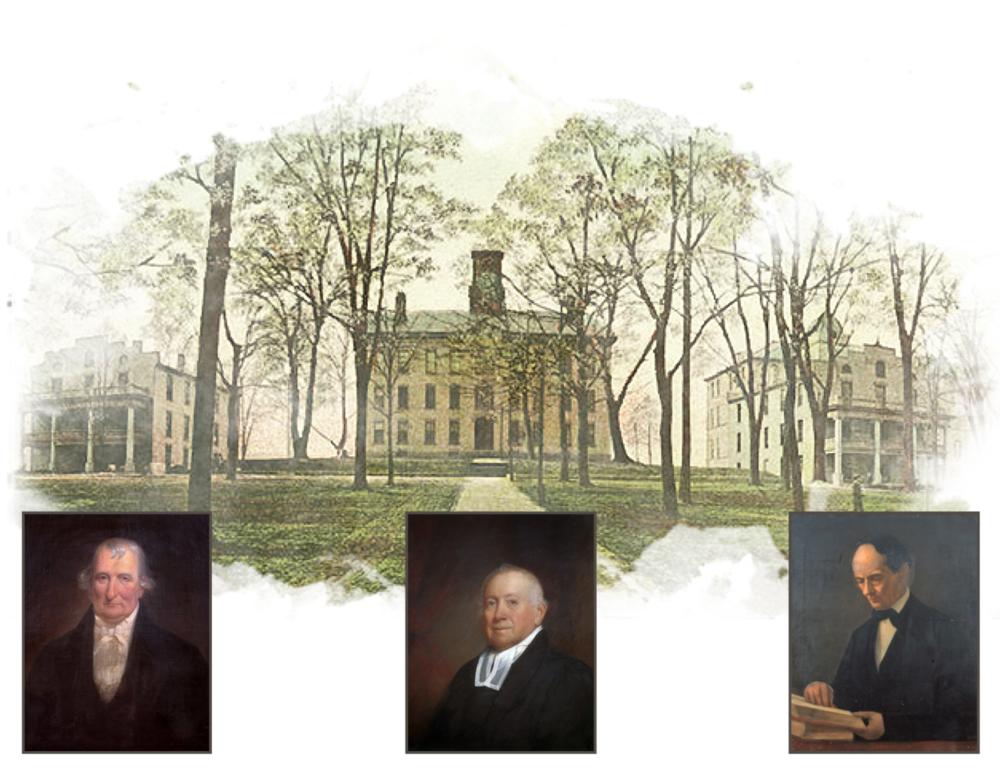 With the laying of the cornerstone in 1816, Cutler Hall sealed its place in history as the oldest building erected for higher education west of the Alleghenies and north of the Ohio River. The building is named after Manasseh Cutler, co-founder of Ohio University. Originally known as the College Edifice, or the Center Building, Cutler Hall has served many purposes including as classrooms, laboratory, library, and a residence hall for University students throughout the 1800s. Cutler Hall was placed on the National Register of Historic Places in 1966. 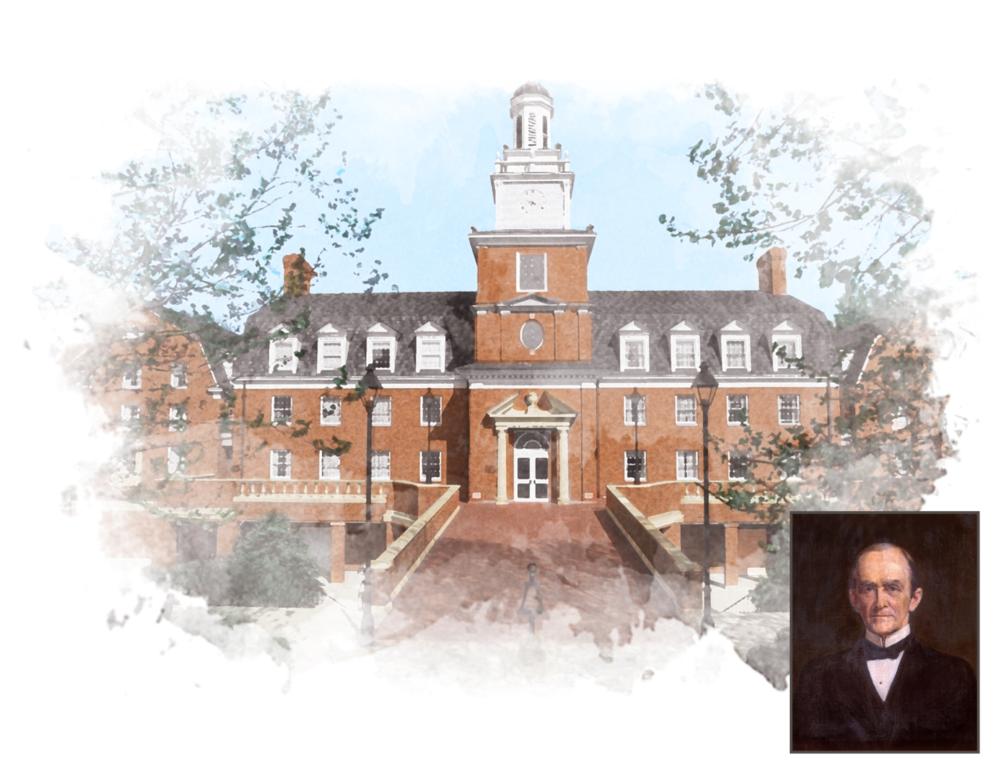 Isaac Crook served as Ohio University’s ninth president from 1896 to 1898. During his short tenure as president, Crook helped organize the faculty senate and oversaw the completion of the original Ewing Hall, an administration building at the time. Notably, Crook devoted much attention to the expansion of the University library materials. He directed 81 volumes from the library of the Athens County Pioneers’ Association, including 50 volumes of the famous Coonskin Library, to be moved from the Athens County Courthouse basement and placed in the University library collection.

The building was remodeled and dedicated as the C. Paul and Beth K. Stocker Engineering and Technology Center in April 1986. 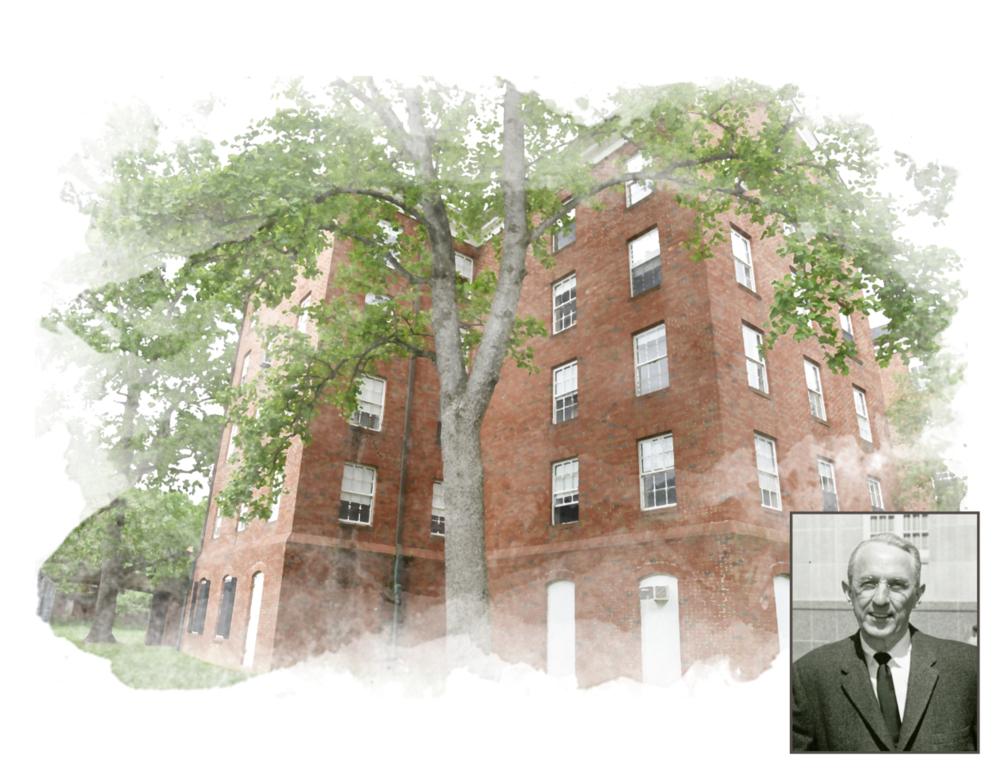 Native to Athens, Ohio, William H. Fenzel graduated from Ohio University in 1918, immediately becoming a professor of accounting at the University, and holding that title for 50 years until his retirement in 1968. Throughout his career at Ohio University, Fenzel also served as acting dean of the College of Commerce and assistant to the dean of the college. Additionally, Fenzel held an officer position for the University Alumni Association for over 40 years and was awarded Outstanding Alumnus of the Year in 1971.

Originally known as South Green building number one, Fenzel House was demolished in 2017. 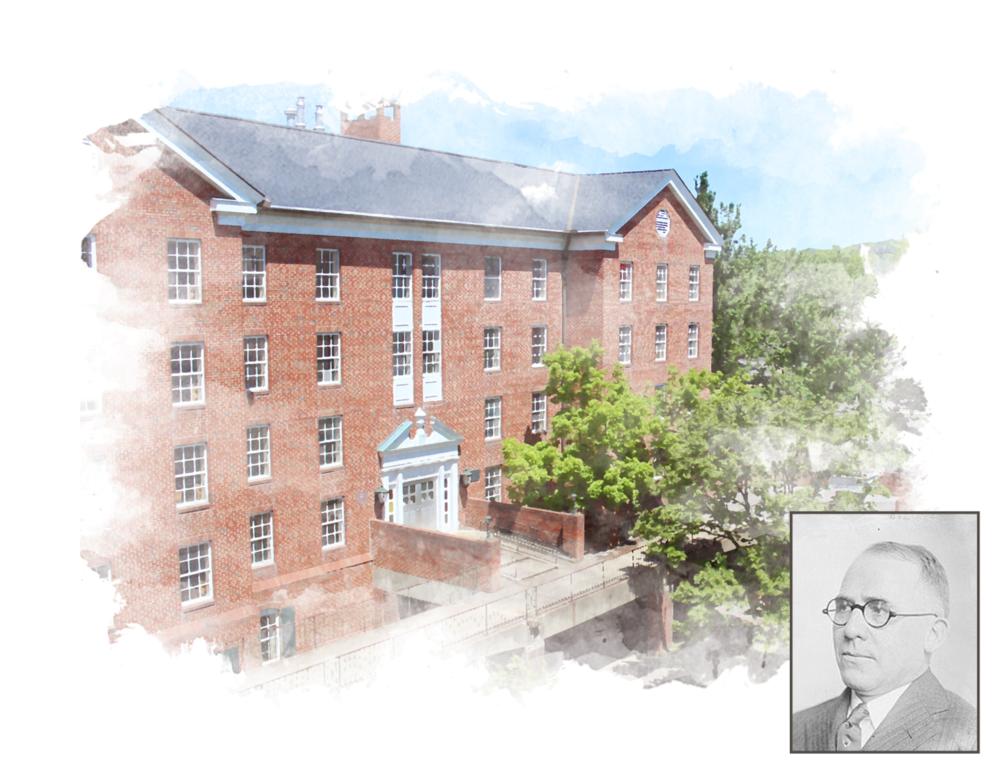 Israel M. Foster, a native to Athens, Ohio, was an 1895 graduate of Ohio University. During his time at the University, Foster was active in sports, managed a student publication and served as president of the state’s oratorical association. Foster was considered one of the University’s most loyal alumni and served as a member of the Ohio University board of trustees for 25 years. Over the course of his life, he served three terms in the U.S. Congress, 17 years as commissioner of the U.S. Court of Claims, as well as serving as an Athens County attorney. 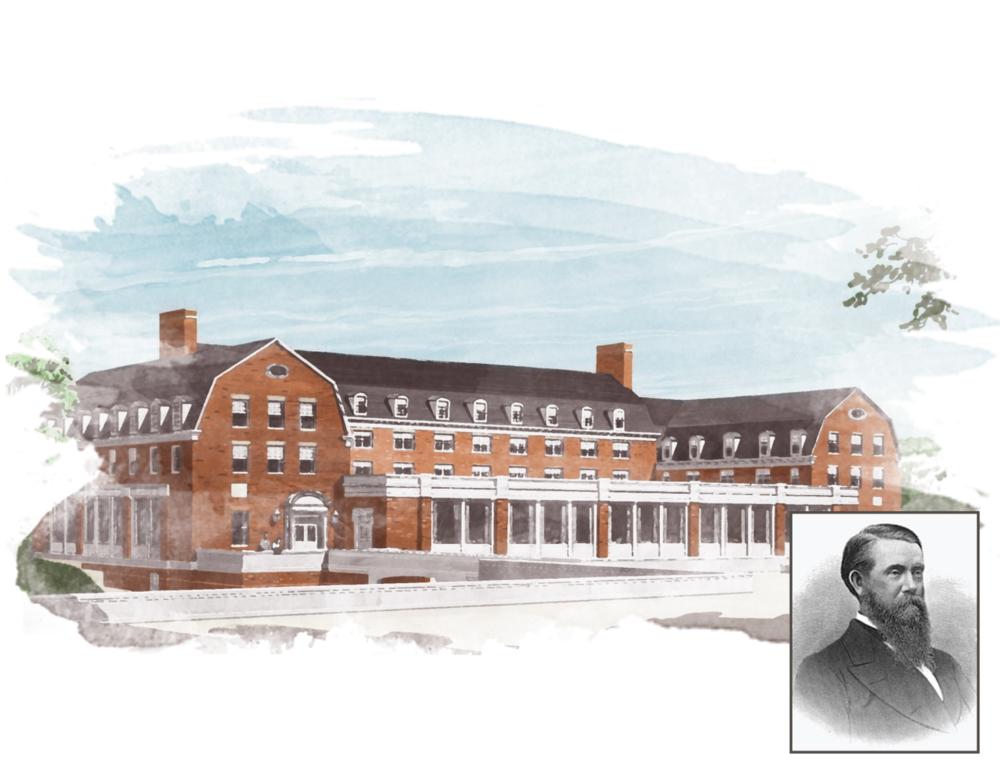 Charles Grosvenor studied law and began his practice in Athens, Ohio. After serving as a general during the Civil War, Grosvenor returned to Athens and continued his law practice. He became involved in politics, serving in the Ohio House and Congress for 20 years. Notably, Grosvenor encouraged Andrew Carnegie to donate money for the construction of a new University library on the Athens campus.

Grosvenor Hall was the first building completed as part of the West Green building project of the early 1960s. In 1977, the building was remodeled and repurposed for the College of Osteopathic Medicine. 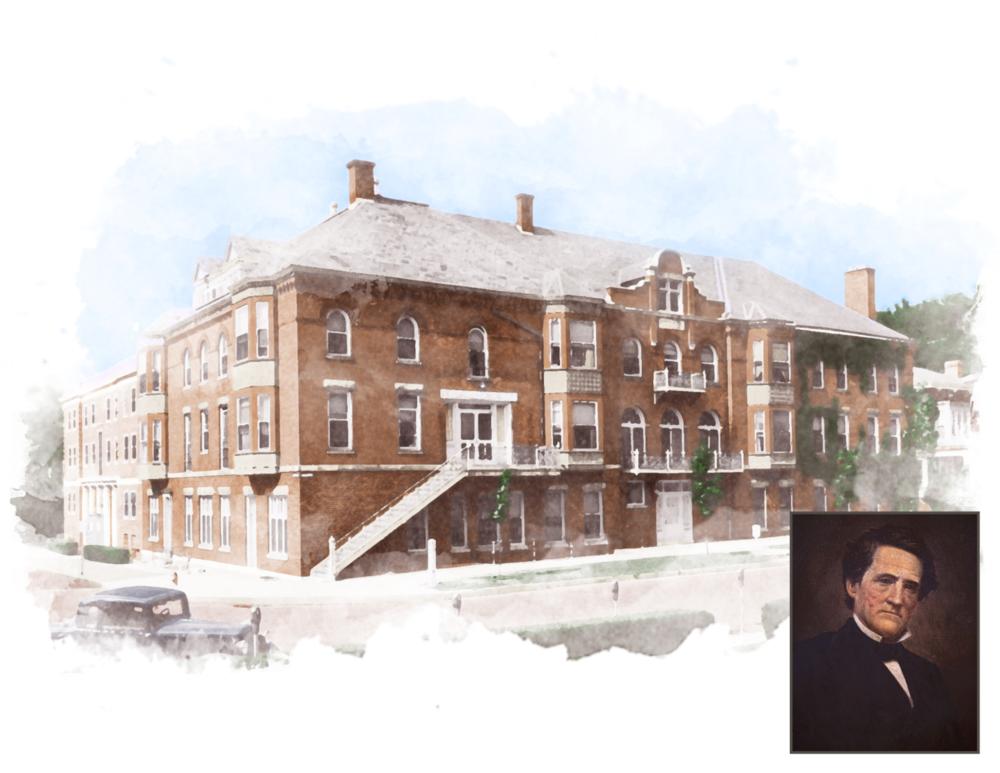 Built by the College Improvement Company, this residence hall was originally known as Women’s Hall. Ohio University rented the building until 1908 when it was purchased and renamed Howard Hall in honor of Solomon Howard, Ohio University’s sixth president, who served from 1852 to 1872. Howard Hall remained the sole women’s residence hall until Boyd Hall was constructed in 1906.

Howard Hall was renovated and expanded multiple times, including in 1937 with an expansion that housed an additional 75 female students. In 1976, Howard Hall was demolished as its function was replaced by the newer residence halls on the South and West Greens. 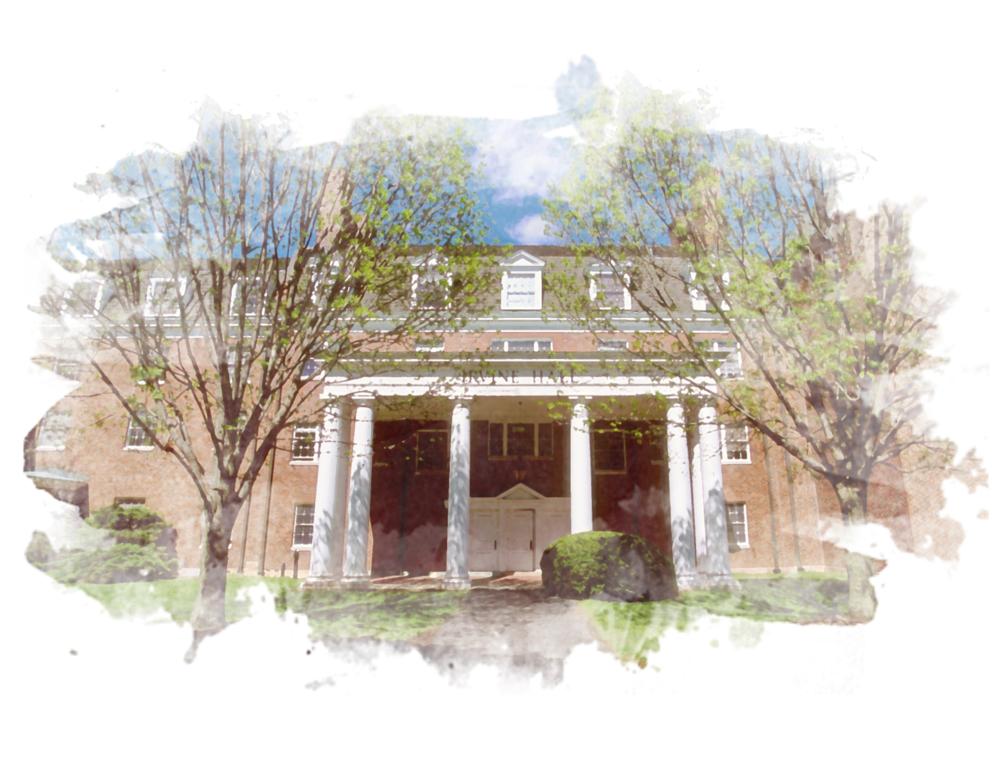 James Irvine was the second president of Ohio University serving from 1822 to 1824. Irvine first came to Ohio University as a professor of mathematics, which was only the second department at the young University. Due to poor health, Irvine was not able to devote much energy to his presidency and resigned in April 1824.

Irvine Hall served as a residence hall until 1977 when it was remodeled and repurposed for use by the College of Osteopathic Medicine. 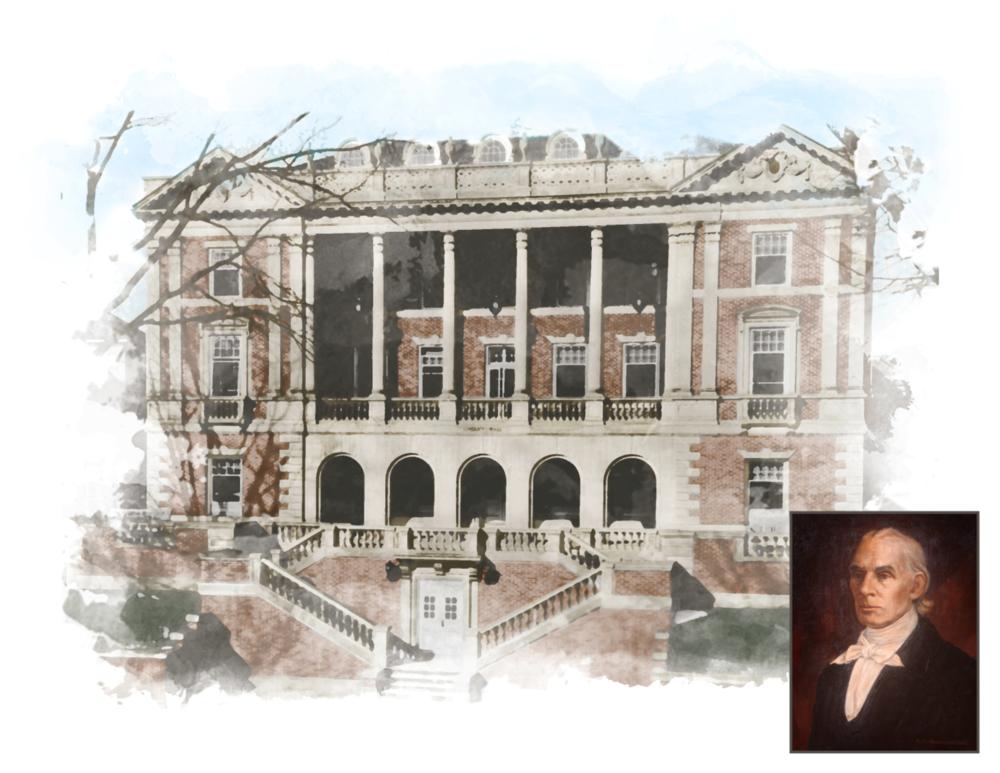 Jacob Lindley was Ohio University’s first president, serving from 1809 to 1822. Before his appointment as president, Lindley played a significant role in the development of Ohio University. The board of trustees accepted his plans for the first building on the college campus, the Academy Building, which was constructed in 1808. That same year, Lindley was appointed preceptor of the Athens Academy, a preparatory school for future Ohio University students.

Lindley Hall was originally built to house 120 female students. As the University’s enrollment continued to grow, so did Lindley Hall, as the north wing was added in 1939 and the south wing in 1952. At present day, Lindley Hall no longer serves as a residence hall, but rather houses several University offices and departments. 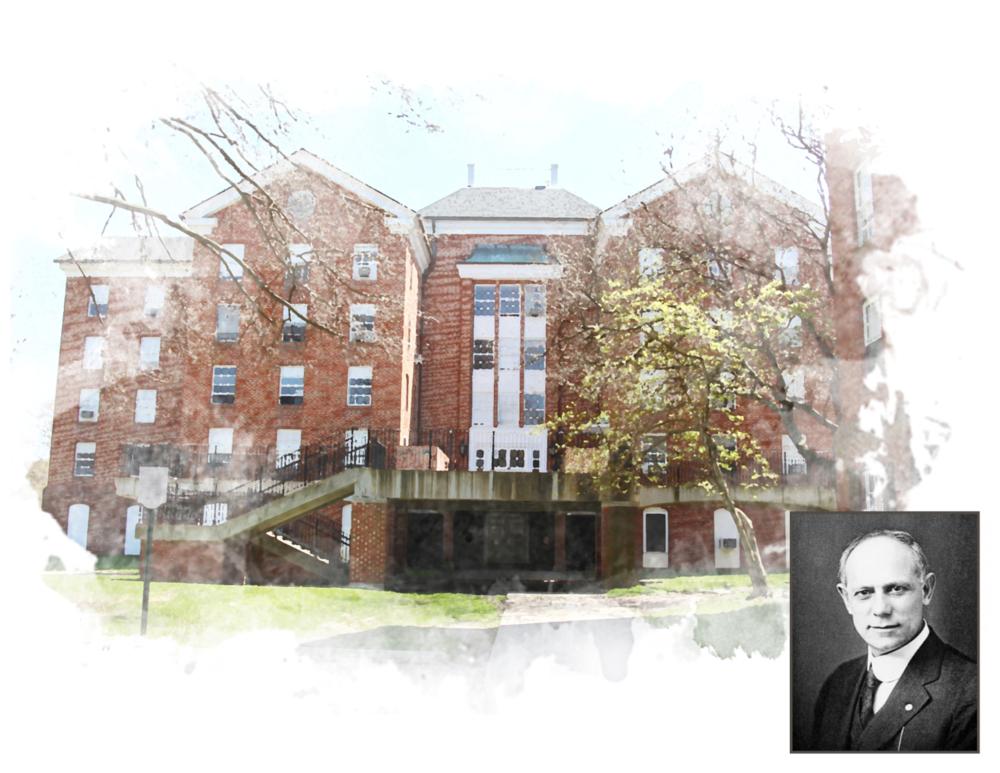 Clement Martzolff, a 1907 graduate of Ohio University, served as a professor of history and was greatly involved in efforts to preserve and grow the University’s alumni relations. He served as the first alumni secretary, organized alumni chapters, developed a national alumni organization, and regularly helped preserve alumni records. To honor the first graduates of Ohio University, Martzolff helped to initiate the construction of the Alumni Gateway, completed in 1915. This gateway continues to stand as a memorial, welcoming both new students and sending well-wishes to graduates. 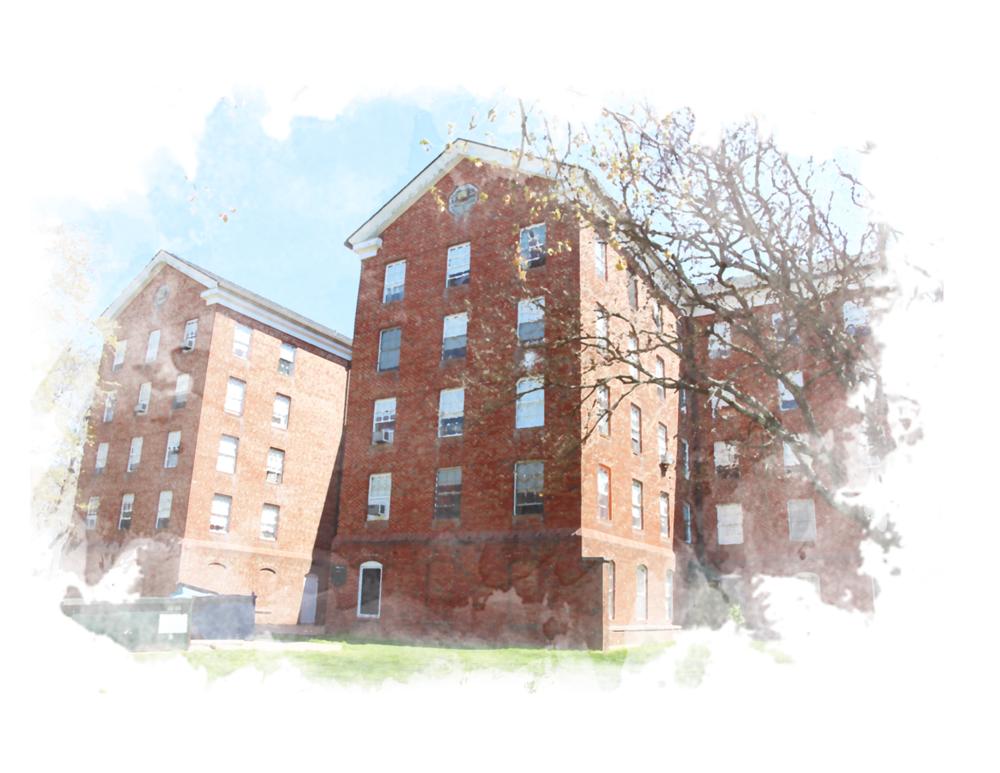 Charles G. O’Bleness was an 1898 graduate of Ohio University and member of the University’s first football team. After graduation, O’Bleness became a philanthropist and businessperson, creating the first endowed professorship in economics at Ohio University, and in 1905, along with his father, O’Bleness organized the First Security Bank of Athens. Continuing his legacy of contributions to the Athens community, O’Bleness donated funds for a new hospital, at that time known as the O’Bleness Memorial Sheltering Arms Hospital. 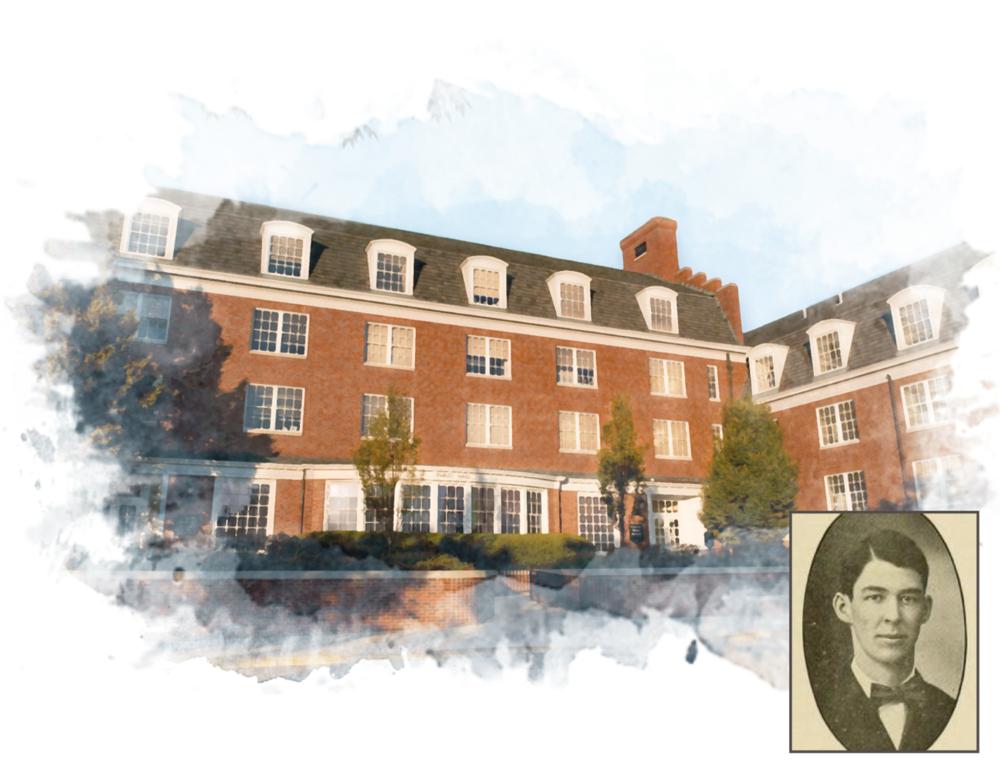 George C. Parks was a 1908 graduate of Ohio University. Parks served for 40 years as a professor of accounting, as well as the business manager, treasurer, and secretary of the board of trustees.

Parks Hall was the fourth residence hall built as part of the West Green building project of the early 1960s. In 1977, the hall was remodeled and repurposed for use by the College of Osteopathic Medicine. 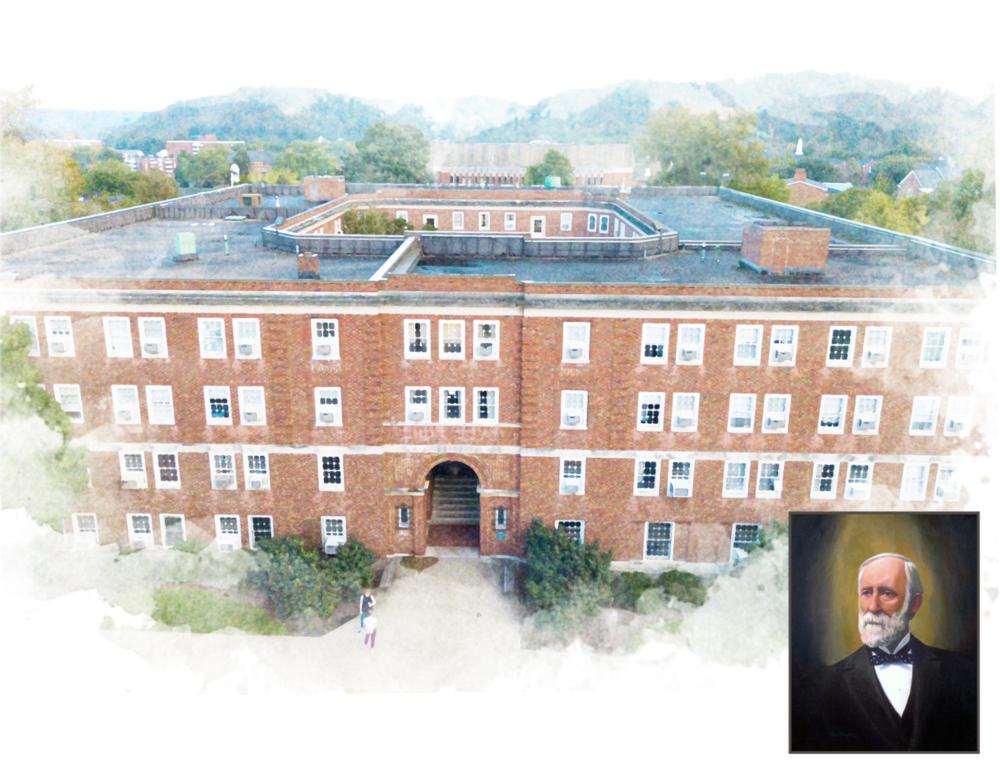 An Ohio University graduate of 1862, William H. Scott was the seventh president of Ohio University, serving from 1872 to 1883, and was the first alumnus to serve as University president. An Athens County native, Scott served for a time as the superintendent of Athens Schools. He returned to Ohio University in 1870 as professor of Greek before taking the role as president.

The north and west portions of the hall were built in the late 1930s and used as a residence hall. It was not until the early 1950s that the south and east portions were constructed, resulting in the Scott Quad that we know today. 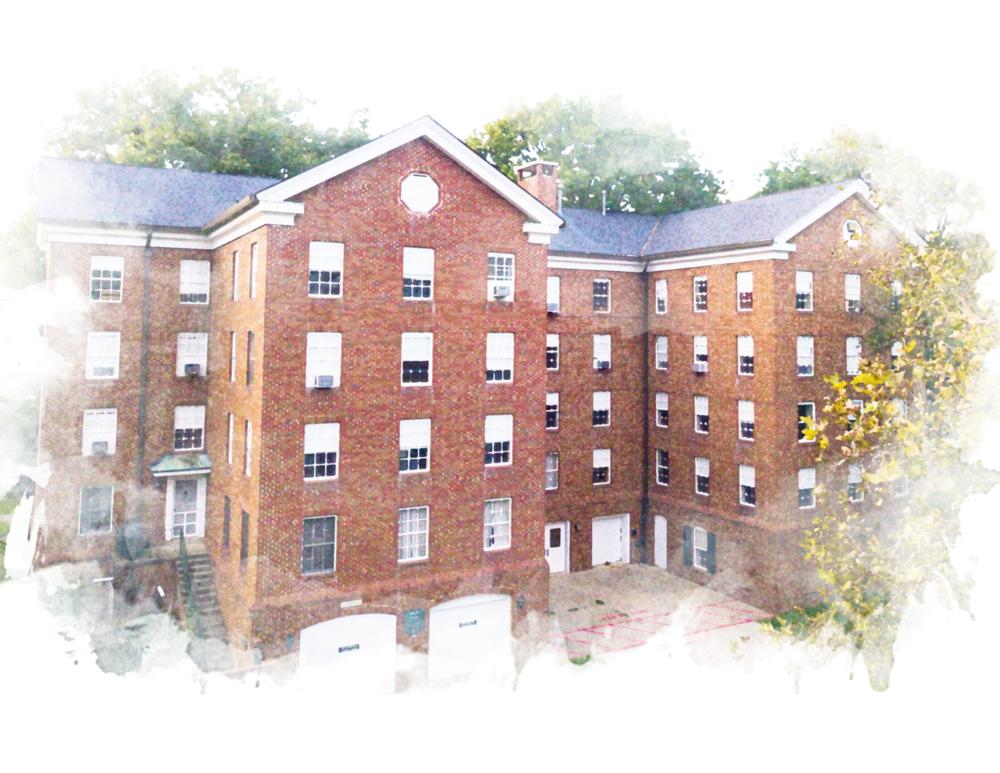 William Smith was an 1849 graduate of Ohio University and an 1853 graduate of West Point. He served as a colonel during the Civil War and went on to establish a career as a civil engineer. During his career, Smith played a significant role in the construction of the first all-steel bridge, which crossed the Missouri River. 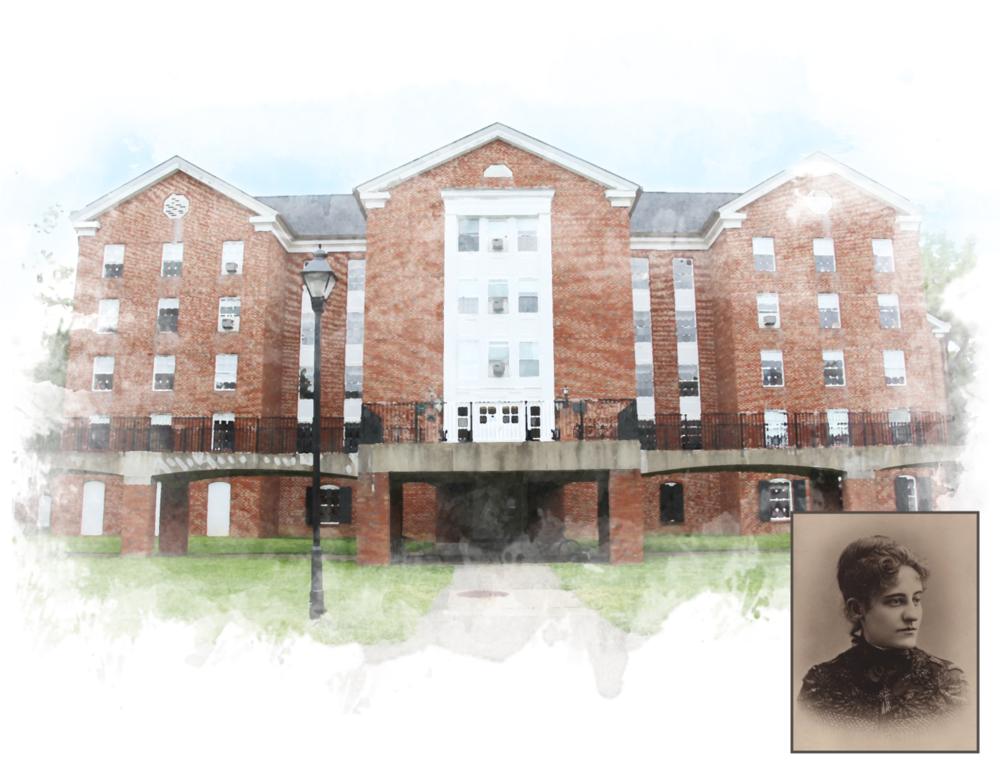 Cynthia Weld holds the honor of Ohio University’s first female faculty member, serving at the University from 1882 to 1883. A native of New York, Weld previously taught at the State Normal School of New York. As the enrollment of women grew, then University President Scott saw it important to increase the number of female faculty members, hiring Weld to teach in the newly established department of history and rhetoric.