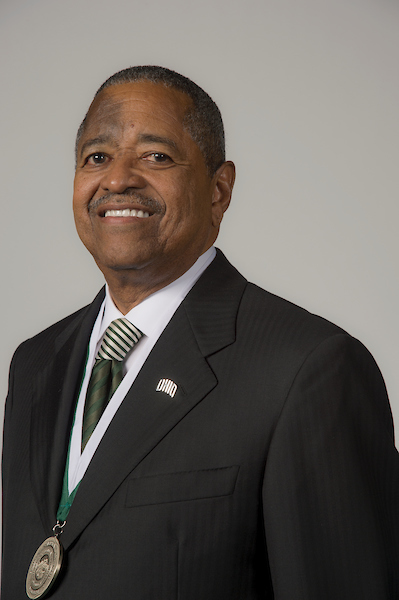 In grateful appreciation of your active and visionary support of the Heritage College during your 13-year tenure as the 20th president of Ohio University, we are pleased to present you with the Phillips Medal of Public Service.

While in office you were dedicated to using university resources to improve quality of life for Ohio’s people. This unwavering focus on public service and social responsibility included strong support for the Heritage College mission to train compassionate, committed primary care physicians ready to practice in Ohio, especially in underserved locales.

As the university’s first African American president, you were a living example of its commitment to diversity, and of the benefits it brings. You made increasing diversity among students and staff a watchword of your administration, while working to maintain the affordability of an OHIO education through increased funding of scholarships.

From the start of your tenure you served on the Heritage College Advisory Board, and during your time in office, the college entered a still-ongoing period of transformative growth unlike any in its history. It was under your university leadership that the college in 2011 secured the record-setting $105 million Vision 2020 Award from the Osteopathic Heritage Foundation, and opened two new campuses in Dublin and Cleveland, greatly expanding enrollment.

Your unflagging efforts to heighten the university’s national prestige included the medical college, which saw its visibility and standing as an educational and research institution increase on your watch.

You have been an inspiration to our students, conveying to them your own deep belief in a life devoted to the greater good. Speaking in 2015 to members of the first class at our new Cleveland campus, you chose to talk about one of your role models, the ‘Father of Ohio University,’ Dr. Manasseh Cutler. You told the students how Cutler, a revolutionary soldier, scholar, scientist and minister, also became a physician, simply because his town didn’t have one.

It is in recognition of this spirit of public service, so in harmony with that of the Heritage College, that we honor you today.