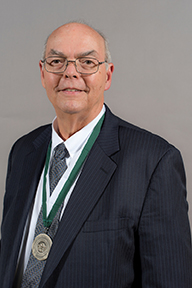 For the last decade Stephen C. Shannon, D.O., M.P.H., has been the public voice of the nation’s 33 accredited osteopathic medical colleges in his role as president and CEO of the American Association of Colleges of Osteopathic Medicine. Serving as the colleges’ spokesperson both in the United States and abroad, Dr. Shannon has steered AACOM toward its vision and mission and worked tirelessly to influence government policy to benefit medical education.

Dr. Shannon began his college career studying engineering, physics and astronomy before switching to history, earning both a bachelor’s and a master’s degree in American history from the University of Maryland. His interests turned toward health care after he volunteered at a free clinic in Washington, D.C., with a college roommate who was pursuing medical studies.

Attracted by the diverse student body and hands-on approach of osteopathic medicine, Dr. Shannon took pre-med coursework, spent time working as a nurse’s aide and hospital orderly, and was accepted into the University of New England’s College of Osteopathic Medicine. He earned his D.O. degree there in 1986, later serving as the college’s dean and the university’s vice president for health services. He completed residencies in osteopathic family practice and preventive medicine, during which he earned a master’s degree in public health from Harvard University School of Public Health in 1990.

After chairing the AACOM board of deans in 2003-05, Dr. Shannon became president of the association in January 2006. In this role, he has vigorously advocated in areas including public health and preventive medicine, health care workforce issues, undergraduate and graduate medical education, and rural health.

In 2011 Dr. Shannon was appointed to the Department of Veterans Affairs National Academic Affiliations Council, which had been newly created to advise the Secretary of Veterans Affairs and the Under Secretary for Health on matters affecting partnerships between the VA and its academic affiliates. His appointment reflected the increasing importance of osteopathic medicine in the worlds of national and military health policy, as the only D.O. named to the council.

During his career, Dr. Shannon has also served as president of the Federation of Schools of the Health Professions; as a senior member of the Health Resources and Services Administration’s Advisory Committee on Training in Primary Care Medicine and Dentistry; and as director of occupational and environmental health at the Maine Bureau of Health. He is a founder and past board chair of the Maine Center for Public Health and a past president of the Maine Biomedical Research Coalition.

While at the University of New England, Dr. Shannon played a major role in developing that institution’s M.P.H. program and in expanding its biomedical research activities.

He has received many awards including the AACOM Dale Dodson Award for leadership in 2016; the New York Institute of Technology Riland Public Service Award in 2011; the AACOM Robert A. Kistner Award in 2010; the Dan Hanley Memorial Trust 2003 Leadership Award in 2003; and the Finance Authority of Maine's Distinguished Service Award in the Field of Higher Education in 2002.