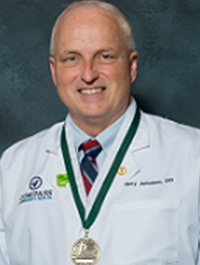 Terry Johnson, D.O., a 1991 graduate of the Ohio University College of Osteopathic Medicine, is state representative for Ohio’s 90th House District, and the only physician serving in the state’s General Assembly. As a legislator since 2010, he has sponsored important health-related laws, including one aimed at helping rein in the scourge of prescription drug abuse in Ohio.

A clinical associate professor in family medicine at the Ohio University Heritage College of Osteopathic Medicine, and an assistant dean in the college’s Centers for Osteopathic Research and Education (CORE), Dr. Johnson has also served as a family practice physician in the Portsmouth area in Scioto County, his lifelong home.

Commissioned into the Ohio Army National Guard while still a fourth-year medical student, he attained the rank of full colonel in just 12 years. A senior flight surgeon and the Ohio Army National Guard’s first State Aviation Medical Officer, Dr. Johnson was deployed overseas multiple times, including two stints in Iraq. He ended his military career in 2011 as the Guard’s State Surgeon, the highest position attainable for a Medical Corps officer at that time.

The bill, which passed the General Assembly in a remarkably quick five months and was signed into law in May 2011, placed limitations on the in-office prescribing of controlled drugs, added licensing requirements for pain clinics and created a take-back program to help people safely dispose of unused medications.

Dr. Johnson has also co-sponsored House Bill 296, which allows schools, school districts and residential or day camps to stock epinephrine “epi-pens” to treat anaphylaxis shock. House Bill 170, which he sponsored in 2013, expands access to naloxone hydrochloride (Narcan), a medication that can save the lives of people suffering overdoses of heroin or prescription pain medication.