The research odyssey of John Kopchick 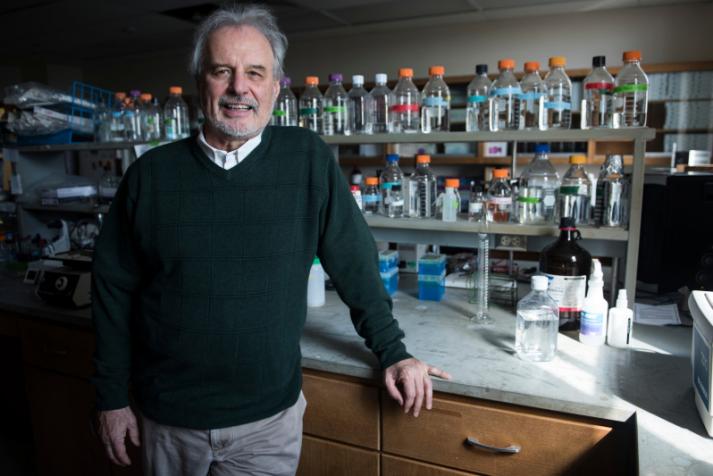 “It all started with a little mouse.”

That little mouse was the surprise outcome of an experiment more than 25 years ago.

Kopchick, who came to Ohio University in 1987 as holder of the Milton and Lawrence H. Goll Eminent Scholar Endowed Professorship of Molecular and Cellular Biology in our medical college and director of the growth, diabetes and obesity section of the then-new Edison Biotechnology Institute, was working with a graduate student to modify the DNA of a laboratory mouse.

When they altered the gene for growth hormone (GH), they thought they’d produce an oversized animal. Instead, they got a dwarf mouse – one that was resistant to cancer and diabetes.

“We were expecting a really big mouse,” Kopchick recalls. “We weren’t expecting to uncover a growth hormone receptor antagonist. That was a pretty exciting day!”

What they had found was a molecule that inhibits the GH receptor gene’s action, lowering GH production. The implications are many and continue to generate new lines of research. Work Kopchick has done to build on this finding has made him one of our college’s most prestigious researchers and an internationally known expert in the field of endocrinology.

One outcome of his research was development of a drug, Somavert® (pegvisomant) used to treat humans with acromegaly, a chronic disease that causes excessive growth of organs and bones and can result in premature death. As of 2018, its technology license had yielded $97 million in royalty income to Ohio University, used to support further research and technology commercialization efforts.

Getting the discovery from lab to pharmacy was a challenge. “This molecule we discovered was the first large-molecule growth-hormone antagonist,” Kopchick explains. “Before that, there were several antagonists pharmaceutical companies had developed for other disorders, but they were small organic-type molecules; this is a large protein. The scientific, medical and pharmaceutical communities didn’t accept it in the beginning. So it was hard to convince investors to invest in a new company.”

For some time, Kopchick couldn’t find a company to translate his discoveries into a medication. Finally, while he was discussing the problem during a gym workout with Joe Dean, then an assistant OHIO football coach, Dean suggested Kopchick call an “old friend” – 1972 OHIO alum and former footballer Rick Hawkins, an entrepreneur in drug development. Hawkins and Kopchick formed a company to develop and test the compound that became Somavert. “That was just serendipity that we were able to do that,” he says.

That’s hardly the end of the story, as Kopchick’s work has been a fertile source of new research around growth hormone, by himself and others. These days, he pursues his investigations as head of a research team that includes Darlene Berryman, Ph.D., R.D., L.D., associate dean for research and innovation; Nick Okada, Ph.D., associate lecturer in pediatrics; and Ed List, Ph.D., senior scientist at the Edison Biotechnology Institute; as well as undergraduate, graduate and post-doctoral students and technicians. Given everything growth hormone does, they have no shortage of research topics.

“We know growth hormone can affect the status of cancer, so an inhibitor might be used for cancer indications,” Kopchick says. “Aging is related to growth hormone. If you have diminished growth hormone action in mice by deleting the GH receptor gene, you get this dwarf mouse that is resistant to cancer and diabetes and just happens to be the longest-lived laboratory mouse in the world. These mice have been shipped all over the world to researchers doing aging research. Additionally, there are people who have a similar mutation, Laron Syndrome patients, who don’t get cancer or diabetes either. So if you decrease growth hormone, you can increase health, and in mice, longevity. That’s why we’re into aging research. The reason we’re also into diabetes research is that too much growth hormone will promote diabetes. Our drug lowers growth hormone. So, could it be used for diabetic patients? More research is needed for that. Although we do different things, they’re all growth hormone-centric. We do obesity research; well, growth hormone dissolves fat, this is why we study obesity. It’s all intertwined; we’re not studying five distinct things (growth, aging, cancer, obesity, and diabetes) that are unrelated. They’re all related, and the net that covers them all is growth hormone and its various actions.”

Kopchick’s ongoing contributions to medicine and basic science have earned him a long list of honors, both from the university and other institutions.

In 2012, he was named a distinguished professor at Ohio University, and in the same year, the Heritage College announced the creation of the John J. Kopchick, Ph.D., Osteopathic Heritage Foundation Endowed Eminent Research Chair in his name.

Kopchick says one of the best things about his job is bringing students, both graduates and undergrads, along on the research journey. “We’ve trained over 350 undergrads, and over 95 percent have gone into either medical school or graduate school,” he says. “We’re very, very proud of that.” He’s also worked with more than 30 graduate students. In honor of his love of learning and impact on translational research around the world, our college created the John J. Kopchick Distinguished Lecture earlier this year.

And as the Heritage College presses ahead with its campaign to strengthen its research focus, Kopchick’s presence on our faculty offers example, inspiration and support for the work of colleagues.