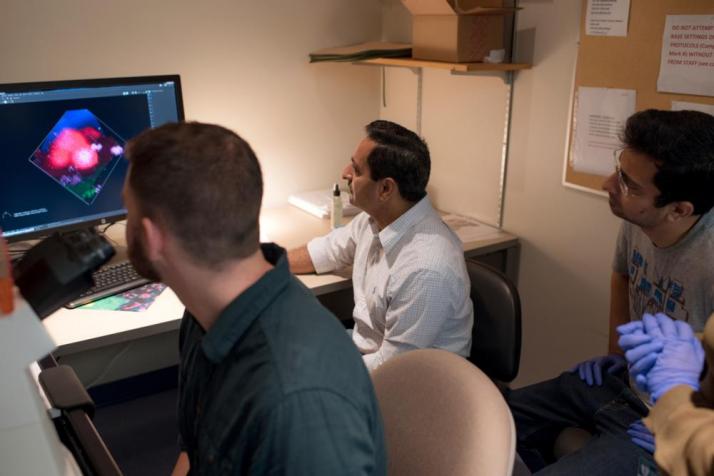 An international scientific collaboration, born of a symposium held last December at Ohio University, has resulted in a major corporate grant to support diabetes-related research conducted by a faculty member at the Ohio University Heritage College of Osteopathic Medicine.

Vishu Puri, Ph.D., associate professor in the Heritage College’s biomedical sciences department, is collaborating with Jens Otto Lunde Jørgensen, Ph.D., a professor with Aarhus University in Denmark, on a research project titled, “Lipolytic effects of growth hormone (GH): cracking the code.” This project is one of two that recently received Grant for Growth Innovation (GGI) awards from Merck KGaA, Darmstadt, Germany, a leading multinational science and technology firm (not affiliated with the U.S.-based Merck & Co.)

The ultimate aim of the research, as described by Puri, is ambitious. It starts from the fact that having higher levels of GH is diabetogenic – in other words, it produces diabetes. GH acts directly on fat tissue resulting in its increased breakdown – which falls under the general term lipolysis, or breakdown of lipids. More lipolysis means more toxic byproducts in the form of free fatty acids, which are bad health news for the heart, muscle, liver and other organs.

Puri and his co-researchers have identified the genes through which GH elevates lipolysis. The two groups will be looking to protect GH-induced lipolysis, which will help regulate fat breakdown so as to bring it to the proper level for good health.

“We want to bring fat breakdown to optimal conditions,” Puri said, adding that research already conducted by him and his Danish colleagues points the way toward an in-depth understanding of how GH-induced lipolysis works and helps them find out therapeutic medicaments.

Puri was one of four new research faculty hired into the Diabetes Institute in 2015, with financial support from the Osteopathic Heritage Foundation’s Vision 2020 award. Their hire was meant to enhance the college’s ongoing research efforts into obesity, diabetes and related conditions.

The two projects that receieved GGI awards were among 65 applications from 28 countries reviewed by an independent committee of six internationally renowned endocrinologists and researchers. In a Merck KGaA news release, Dr. Steven Hildemann, M.D., Ph.D., global chief medical officer and head of global patient safety for the company’s biopharma business, praised the “scientific quality and rigor” of the winning projects, adding, “we look forward to seeing meaningful outcomes of these projects making a difference in patients’ lives.”

Heritage College Executive Dean Ken Johnson, D.O., agreed. “Dr. Puri is doing cutting-edge research, which holds out the real hope of effective new treatments for diabetes and other metabolic diseases,” Johnson said. “This support from Merck KGaA is very exciting, not only for what it says about the importance of Dr. Puri’s work, but for the resources and expertise the company brings to the collaboration.”

The collaboration between Puri and Aarhus University researchers stemmed from the First Annual Symposium on the Effects of Growth Hormone on Metabolism, held in December 2016 in the Konneker Research Center in Athens. The symposium was co-sponsored by the Diabetes Institute , the Heritage College Department of Biomedical Sciences, Ohio University’s Edison Biotechnology Institute, and the Pfizer pharmaceutical company. Its creation was spearheaded by John Kopchick, Ph.D., Goll-Ohio Eminent Scholar and professor of molecular biology in the Heritage College. Kopchick, an internationally recognized expert on growth hormone, has had a more than 20-year relationship with Aarhus, which in 2015 awarded him an honorary doctorate in medicine.

Discussions among Puri, Jørgensen and Aarhus colleague Niels Jessen, M.D., Ph.D., about their respective research was the genesis of the proposal that won the GGI award. “It was crucial,” Kopchick said. “It set the stage for our understanding of what they do, and their understanding of what we do, and it turned out they would be very complementary.”

This type of synergy, he added, is what any symposium organizer dreams of. “That’s the ultimate – that’s what you really hope will come out of it,” he said. “This is almost a poster child for how a symposium should work.”

Puri said the idea of bringing Jørgensen and Jessen to Athens arose after they shared a study they had done, in which they infused human subjects with growth hormone, then tested their fat tissue, and found that levels of FSP27, a fat-specific protein discovered by Puri, were lowered. FSP27 was known to be involved in regulating fat metabolism and insulin sensitivity in human adipocytes (fat cells); the Danish research suggests that GH plays a major role in lipolysis, via some mechanism involving FSP27 (among other proteins) in humans.

“When this paper came, we got goosebumps!” Puri recalled. “We immediately called them and said, ‘We need to talk to you now.’ And we talked to them, they were excited, and we started working together.” This led to the Danish researchers’ being invited to December’s symposium, he said.

The aim of the Merck-funded research project will be to test – beginning in cultured human fat cells – a variety of compounds, probably including GH, to see if they affect levels of FSP27 or other proteins and can thereby help regulate lipolysis. “We are collaborating with various companies right now,” Puri explained. “They have libraries of compounds available. We are going to do some screening of those compounds, and then we will start fishing for which compound is the best.”

Puri noted that his team already holds two provisional patents for interventions into the lipolytic process. And if they can perfect a way to bring lipolysis to its optimal level, the implications for treating metabolic illnesses – not just diabetes, but cardiovascular disease and others as well – could be enormous.

“We want to find out the fundamentals behind fat metabolism,” he said. “And the sky is the limit.”