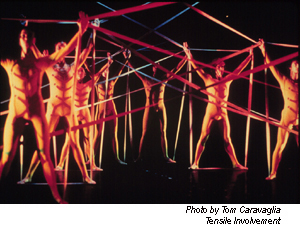 Summary: The Video sub series is part of the Moving Image Series and consists of original video and preservation videos of original films. 64 Original videos document the choreographic works of Alwin Nikolais and Murray Louis and were recorded during the 1970’s through the 1990’s.  Preservation videos document film recordings from the 1950’s and 1960’s.  Content includes performances, rehearsals, and workshops.  Murray Louis selected the works to be preserved and matched the sound elements to the original films.  John Allen of Cinema Arts transferred the early film to video format.  The shipment of videos began in January 2001 and is ongoing.  Judith Connick processed this series.  Some tapes have more than one work recorded on each tape that affected the arrangement.  Where possible, the sub series are arranged by artist, chronologically, and by type of tape.  Videos are arranged by the date specified on the tape.  If no date is specified, the arrangement is based on the premiere date of the choreographic work .