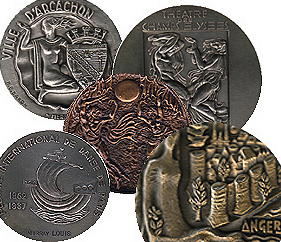 Summary:  The Awards Series consists of objects and papers received by Alwin Nikolais and Murray Louis in honor of their achievements.  The awards are international, national, and local in scope and range from the National Medal of Arts to Keys of the City. The series is arranged by artist and chronologically.  Deposits of awards were received from 2000-2011.