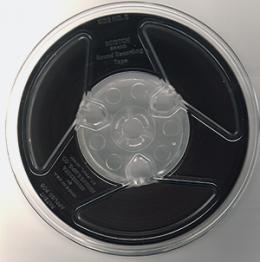 Preservation copies on compact disc specify the composer and the length of work.  Robert Auld of Auldworks was the audio engineer and completed the preservation process and transfer from original reel-to-reels to other formats.  This series is described at the item level in the finding aid.

The Original Reel-to-Reels Not Preserved sub series includes the sound recordings to accompany the dances as well as interviews, advertisements and lectures.  The recording boxes indicate whether they were utilized for rehearsals or performances.  Dates range from 1936 – 1996.  Preservation Copes:  Reel-to-Reels are preservation copies created from the original reel to reels.  The names of the composers and recording notes are included.  Preservation Copies:  Compact discs include archival copies and over 200 use copies created from the original reel to reels.   Original Reel-to-Reels:  Preserved are the original copies that were used to create the preservation copies in reel-to-reel and compact disc formats.