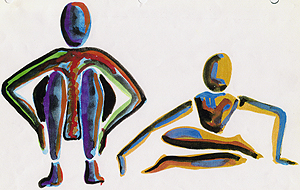 The Murray Louis sub series includes manuscripts for magazine articles and books, scripts from video productions and plays, and transcripts of interviews and speeches.  Manuscripts for published books include Inside Dance and Murray Louis on Dance.  Manuscripts for a Dance Magazine column titled “On Then and Now” are included.  Video scripts are from the series, Dance as an Art Form.  Play scripts were created at the Henry Street Playhouse and performed by the Young People’s Theater Workshop in the 1950’s and 1960’s.  Transcripts of interviews include a series from the 1980’s with Dance Educators and speeches from numerous academic and award ceremonies.

The Alwin Nikolais and Murray Louis sub series includes manuscripts and a copy of The Nikolais/Louis Technique: a philosophy and method of modern dance including the unique gesture, a collaborative project of both artists.