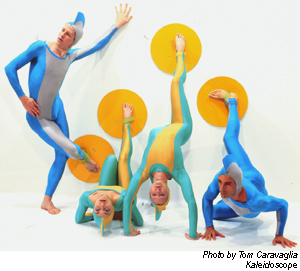 The Moving Image series consists of four sub series: Film, Video, Streamed Media Files, and MPG files.  The series is arranged by artist and by date.  The film and video sub series are also arranged and categorized as “preserved” or “not preserved”.  Transfers of film, video and DVD began in 2000.  Deposits have continued to be received through 2011.

The Film Sub series document the early choreographic works of Alwin Nikolais and Murray Louis and date from the 1950’s – 1960’s.  Content of the films include performances, rehearsals and workshops.  Murray Louis synced sound tracks to the original films.  John Allen of Cinema Arts completed the preservation of early film, matched the sound and film elements, and created preservation copies in video format. 27 films had sound added and were preserved to VHS format.

Streamed media files were created in 2005.  Over 5 hours of performances are available on the Alwin Nikolais and Murray Louis Dance website.  Files of these performances were saved to DVD.

Several performances on original videos were reformatted to DVD, Mpeg2 (master) and mpg4 (access) formats in 2010.