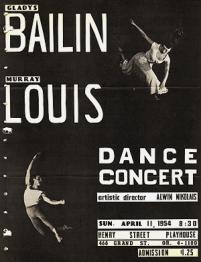 The Posters sub series consists of over 433 posters. Over 100 posters are encapsulated for preservation. Posters are arranged by artist and by size.

The Playbills and Handbills sub series document specific information such as the place, date and time of the performance. Some playbills and handbills are also included in the programs sub series.

The Programs sub series document performance events including the date, venue, list of choreographic pieces and dancers. Dates of the programs range from 1939 – 2011.  Programs, brochures, booklets, bulletins and other miscellany are included.

The Press Coverage sub series includes Magazine Press and Newspaper Press. The Magazine press consists of articles written about the artists as well as articles written by Alwin Nikolais and Murray Louis. Dates of the Magazine press range from 1946 through 2010. Newspaper press contains articles, reviews, interviews, press releases, advertisements and other memorabilia. John Martin reviews are a sub series of the Newspaper Press series. The condition of the paper is poor. These reviews were published between 1927 – 1938.