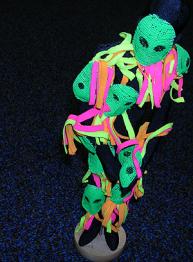 The Costumed Figurines series consist of 13 wooden costumed figures constructed by Frank Garcia, costume designer for the Alwin Nikolais and Murray Louis dance companies. They depict the choreographic works by Alwin Nikolais. The figurines were used in the opening segment of the “World of Alwin Nikolais” video series. They are approximately 9" in height and contained in 2 boxes.