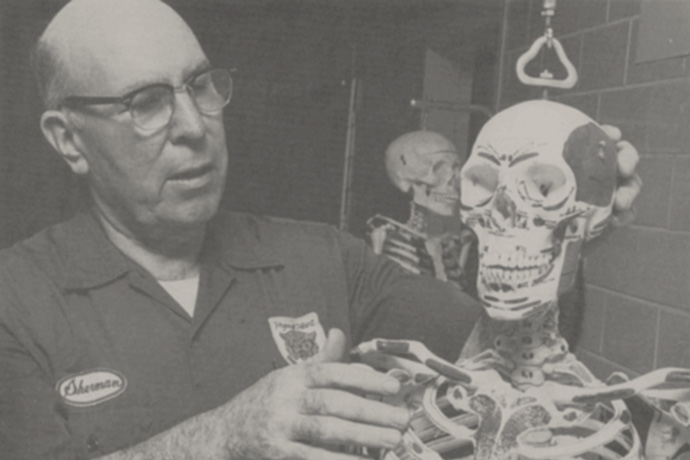 Reminisce with any member of our first class and sooner or later you’re likely to hear about Sherman Brooks, who served as mentor, confidante, adviser and tutor to students from 1976, when the college opened, till his retirement in 1985. And he did it all while keeping the hallways clean.

“There was a janitor – he was the nicest guy,” remembers 1980 alum Stephanie Knapp, D.O., now a pediatrician and allergist in Pennsylvania. “He was from southern Ohio. He was very encouraging when we were studying at night. He was such a great guy, and I really remember him and how kind he was and how welcoming.”

Knapp is just one of the many alums who still remember Brooks, who died in 1987. A 1978 student yearbook featured an in-depth feature on him, reporting that the custodian “has gained a legacy of respect from the osteopathic students by not only being a physical plant employee, but also a ‘resident dean of humanity’ … What can you say about a janitor who can tell you how cadavers are preserved, explain the functions of the heart, know the birthdates of 59 students and root and cheer for them through every arduous step of their scholastic career?”

Brooks reportedly had a lifelong interest in medicine, and had asked Ohio University to transfer him to work in Grosvenor Hall when the new medical school opened. “He would quiz the kids, and they loved him,” recalls Chip Rogers, who first worked for the college as assistant and driver to first Dean Gerald Faverman, and later went on to become director of alumni relations and director of advocacy.

In 1990, a number of people who had been with the college from its earliest days got together to honor the man who had always remembered students’ birthdays and had a kindly word to offer when they needed one. Some 25 year later, the Sherman Brooks Memorial Scholarship is still helping first-year students from small southeastern Ohio towns who have expressed an interest in rural family practice.