A Look Into the Baby Bag Project: The Effort to Aid Mothers in Need 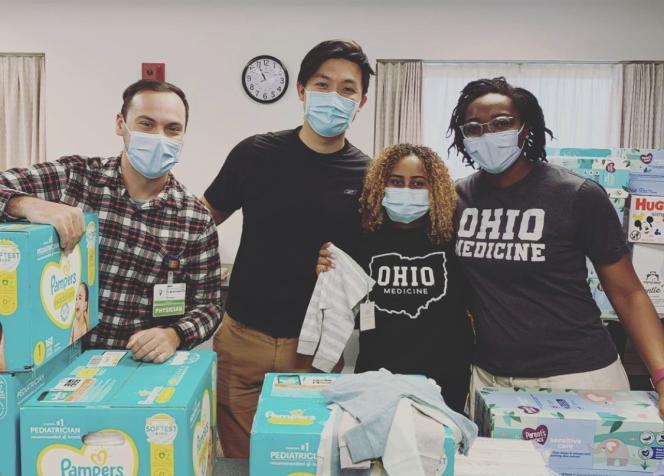 The birth of a newborn should be a time of rejoicing, connection and leaning into paternal instincts. However, it is not always a happy moment for every new mother. Some parents lack the resources or funds to give their newborn everything that's needed, and poor health outcomes may result. Four Heritage College students have partnered in an effort to help ease the concerns of parents facing disparity.

Aptly named “The Baby Bag Project,” Class of 2022 graduates and project co-founders Saron Checkole, Ziyue Wang, Alicia Rodgers and first year student Ayah Said have all worked together to compile ‘bags’ of infant supplies to deliver to parents who can’t afford them.

“It was started by medical students about maybe two years ago now, and its aim is to raise funds to then use those funds to buy resources that help with infant mortality and basic child rearing during the newborn up to infant stages,” Wang said.

Born in China, Wang moved to Columbus when he was three. As an undergraduate at Ohio State, he studied abroad in Finland, which has had a ‘baby box’ program for over 70 years. After starting medical school at the Heritage College, Wang continued to think about the program. He approached Checkole about it. The two were diversity scholars and had collaborated on other projects promoting racial awareness and socioeconomic disparities.

“At the end of our two years of working together during pre-clinical in Athens, we looked at each other during the COVID pandemic and said, why don't we do something? We're both clearly interested in this. Why don't we try to start something?” said Wang. 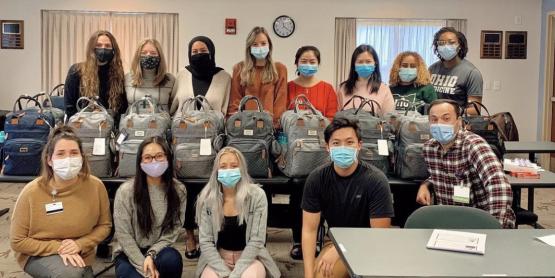 Checkole was raised in Ethiopia and witnessed the consequences of healthcare disparities, including the death of her uncle from leukemia when she was fifteen. These experiences fueled Checkole’s involvement in the project.

“Growing up in a third world country with multiple healthcare disparities including physician shortage, lack of easy access to healthcare, lack of medication and treatment facilities, I understand why my uncle had poor outcomes,” Checkole said. “This project is very near and dear to my heart. I have always had the passion for caring for underserved populations and underrepresented minorities, and the project directly helps those who are impacted by social determinants of health.”

The project has two main stages: fundraising, then distribution of the supplies. When one set of kits is handed out, the fundraising has already begun for the next set. This cyclical structure works best to meet the need for supplies. Wang has been pleased with the amount of support the project has received.

For Rodgers, also a co-founder of the Baby Bag Project, the statistics concerning infant mortality are disturbing.

“Specifically in Ohio and its major metropolitan areas, there is a huge gap in babies of color who make it to their first birthday,” Rodgers said. “The number is too high. It has improved, but it's still higher than the national average, and even the state average for babies of color. We provide items like diapers and nursing clothes in bottles and materials like that, that can really help offset costs.”

Recent addition to the team, Ayah Said, joined the project with the mission of helping others in need.

“From reading the stories from the moms who are participating in this project, it seems to just reinforce how much I do want to help women, especially underserved women, in our community,” said Said. “We've seen a steady increase of newborns dying within their first year, and we wanted to address that issue by providing breastfeeding supply bags, diaper changing bags, all of what they need.”

The students have partnered with different medical organizations to help with the project including the Family Medicine Residency Program at OhioHealth Riverside Methodist Hospital and Wellness on Wheels, a mobile clinic associated with OhioHealth in Columbus. The project was executed with the support of faculty advisor Robin Newburn, D.O. Funding was provided by the Arnold P. Gold Foundation National GHHS, Riverside Donors: Dr. Dusseau and Mrs. Chu and a private donor who remains anonymous.

For those who want to get involved with this project, contact ohiobabybag@gmail.com for more information and check out their Instagram page, @ohiobabybagproject. Said has been working on coordinating future leadership positions and can be reached through the email above. Those who want to volunteer their time can email as well. Volunteer opportunities include contacting potential funders, collecting stories from the mothers, planning and administrative duties.