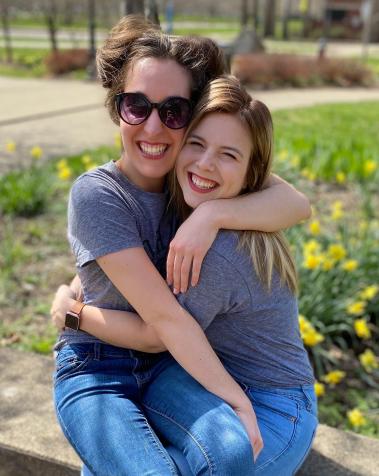 Imposter syndrome can be felt by anyone, regardless of profession. The looming atmosphere of not feeling good enough, not living up to expectations, feeling as if no progress is being made towards a goal. Channeling those feelings into constructive conversations is at the heart of “Impersonating Doctors,” a podcast series created in 2020 by fourth-year students Nicole Siliko and Ana Aguilar.

The inspiration for the series struck Siliko when she realized that some conversations did not circulate within the educational institution.

“We don't talk about failing exams,” said Siliko. “We don't talk about not matching. We don't talk about how it feels to lose your first patient and what we call the emotional side effects of medical school. We felt that by having a podcast, we really can tell these stories and hopefully, make people feel a little less alone when they experience some of these really common things, like imposter syndrome, which we dealt with a lot during our first two years of med school.”

Siliko picked up the phone, called her best friend Aguilar and the two put the proverbial gears in motion to produce the podcast.

“I think quarantine is probably where Nicole got her ideas, because we were not doing great emotionally,” said Aguilar. “Through the pandemic, we've been able to learn how to use Teams and Zoom. I've actually only seen Nicole in person maybe two or three times over the past two years. We left on spring break early 2020. We were like, okay guys, see you in a week. Nicole went on a cruise. We all thought we would come back and hear about the cruise. It has been two years.”

Siliko majored in biochemistry and theater as an undergraduate, while Aguilar was a molecular biology and anthropology double major. Becoming a doctor has always been an interest for Siliko, ever since she performed routine checkups on one of her regular patients, Disney mainstay Tigger. Aguilar, on the other hand, had a lot of firsthand experience with illness, as she was diagnosed with immune thrombocytopenic purpura, also known as ITP, at 14. It is a blood disorder that causes low platelet counts, so the body has difficulty healing wounds.

“I dealt with that for four years,” Aguilar said. “I had always been a huge science nerd and just having that experience, being in the hospital, seeing what my team did for me really made me start thinking, maybe I want to be a doctor.”

“Impersonating Doctors” has covered a wide array of topics in its two years, and the co-hosts have their own personal favorites. Siliko is most proud of an episode with an ER physician who discussed coping with patient deaths.

“On my first code, all of the physicians were just like, okay, let's go get lunch. I had just seen a person dying in front of me for the first time. And they're like, okay, bye. Like, this is just a normal part of the day, but I was not ready to cope with those things,” said Siliko.

While Aguilar likes episodes that reflect on more serious topics like patient death and mental health in medical school, what she called the “heavy hitters,” the topic she had the most fun covering was dating in medical school.

“Do you date another medical student? Do you date somebody outside of medicine? How do you find love when you are laser-focused for 16 hours a day and then have to sleep,” said Aguilar.

Both Aguilar and Siliko graduate this May. Siliko matched with OB/GYN at Wright State, Aguilar matched in pediatrics at Loyola Medicine in Chicago.  They have advice for students thinking about becoming physicians.

“I think my theater major prepared me way better than my bio chem major, in a lot of different ways,” said Siliko. “I had improv classes where I really had to learn to think on my feet. I had different classes where I'd go from dancing to directing to organic chemistry. It really trained me to think in different ways and talk to different people. I would highly recommend anybody who is considering this don't just major in biology, because that's what you think you're supposed to do, because there's a lot of other things that will prepare you in different ways.”

“You need to be able to relate to people,” said Aguilar. “Even with my anthropology degree, people would ask me all the time, why did you major in anthropology? What are you doing? Digging in the dirt all day? Anthropology is the study of people. It's the study of culture. We see a lot of people from different cultures and understanding where they're coming from and how they love their child, how they go about treating their child is so important.”