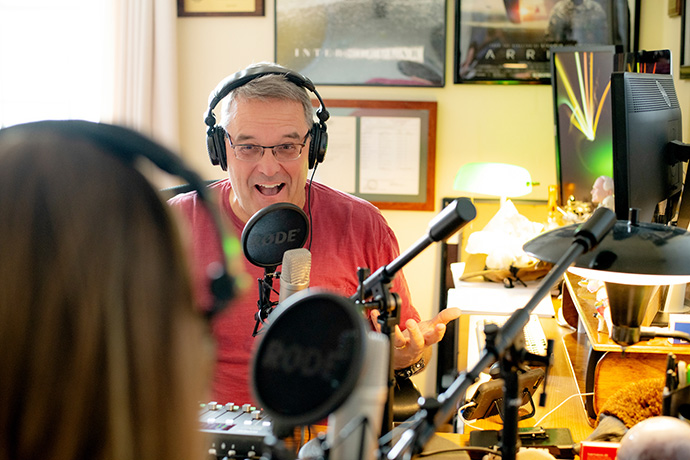 Podcasting is filling up more and more of the world’s listening bandwidth, with shows discussing every conceivable topic from politics to fashion to science to entertainment. Alert to this growing trend, some Heritage College faculty members are using the podcast medium to enlighten listeners on important health care issues.

“Practically since its creation, our college has been reaching out beyond the campus to share health care information and insights with the wider public,” said Ken Johnson, D.O., chief medical affairs officer at Ohio University and executive dean of the Heritage College. “In creating their podcasts, our faculty are taking the initiative to expand our impact through a communication medium that’s reaching more people every day.”

Skinner, based at the college’s Dublin campus, launched Prognosis Ohio in late 2018 with support from WCBE radio, an NPR affiliate in Columbus. The show looks at health policy in the state, with an eye toward how that policy affects health outcomes.

In one episode, Skinner interviews Dayton Mayor Nan Whaley on topics including recovery efforts from a recent tornado, opioids and addiction, housing, food and the role of mayors in national health care politics. In another, he talks to Chad Jester, president of the Nationwide Foundation, about the “Denial, Ohio” campaign to educate the public about opioid abuse, sponsored by the Ohio Opioid Alliance.

“My show is really about what’s going on around Ohio in the area of health and health care,” Skinner explained. “In all cases, we’re interested in what people are doing to improve the health of our state. So we’ll focus on journalists who are covering interesting stories, people who are shining a light on health care issues in the state or legislators who are taking on an issue.”

Prognosis Ohio has logged thousands of total listens in a little over a year of existence, and has a steadily growing audience that as of early 2020 was up to around 400 per episode.

Medicine through the doctor’s eyes

Fredricks started Rotations in 2017 on the Athens campus at the urging of then-first-year student Nisarg Bakshi, who co-hosted until he began third-year rotations. The show is a project of Media in Medicine, a collaborative effort between faculty and students from the Heritage College and Ohio University’s Scripps College of Communication, which produces teaching and research projects in media, communication and medicine.

Aimed partly at medical students, the show has featured interviews with prominent physicians, a piece on the medical school admissions process and “specialty spotlights” in which a doctor in a given medical field talks about what their practice is like. Particularly memorable programs for Fredricks include a multi-show interview with Kent Brantly, M.D., who contracted Ebola while in Liberia, and a talk with John Kahler, M.D., a Chicago pediatrician, about his medical mission work in war-torn Syria.

Rotations has also done annual check-ins with Bakshi, now a fourth-year student, about his ongoing student experience, providing a first-person look at what it’s like going to medical school.

Fredricks reports that Rotations has had over 10,000 listens. Part of what he hopes the show can accomplish, he said, is “humanizing physicians. Because we live in a world today that is just off-the-charts wrong when it comes to patient-physician relationships. We’ve lost that sense in the hospital system of the uniqueness of each individual, and we have to find a way to recapture that. And that includes physicians.”

Medicine through the patient’s eyes

“It was his brainchild,” Wolf recalled. “He said, ‘Why don’t we do a format like This American Life, but with people’s stories about health and illness and accidents, especially their ensuing experience with the health care system?’”

The resulting podcast, which boasts over 300,000 listens, offers sometimes harrowing personal accounts from people who have gone through difficult medical ordeals while struggling to get help from health care providers. Other episodes share a patient’s-eye view of an experience such as being pregnant and giving birth for the first time. (Wolf’s daughter was one of her guests on those episodes.)

On a show titled simply “Stomach Pain,” one guest candidly recounts a battle with diverticulitus that required him to have a temporary colostomy bag; on the same episode, another guest talks about having Crohn’s disease, which at one point had her writhing in terrible pain for hours in the hospital without adequate help from any physicians and nurses. These are not just gripping tales; Wolf uses them to convey useful lessons.

“We're teaching people about the health care system,” she said. “And through people’s stories, we offer lessons in how to improve doctor-patient communication and what to take into account when making difficult medical decisions.”

Adding a new dimension to scholarship

All three faculty podcasters agreed that their online work helps them share their expertise beyond academia.

“Increasingly, what we call public-facing scholarship, or public-facing engagement, is an accepted and important part of what we (as professors) do,” Skinner said. “I’m a public employee, and I take that seriously – that the goal is not to just have conversations within the walls of our buildings, but to be an Ohio University and Heritage College professor who’s engaged in conversations more broadly.”

Fredricks suggested that the impulse driving Rotations had a precursor in Family Health, a radio show hosted by the college from 1981 to 2012, which addressed frequently asked medical questions. That show, which had millions of listeners worldwide, was hosted first by the late Dean Emeritus Frank Myers, D.O. and then by Harold Thompson III, D.O., a longtime faculty member.

“I would say my line of research is narrative medicine,” Fredricks said. “There are a lot of stories out there, and we know for sure that people are more motivated by first-person stories than they are by looking at large amounts of data.”

Wolf – who has worked to reach a wider audience through books on the history of American birthing and breastfeeding practices – said Lifespan dovetails beautifully with her scholarship and teaching.

“Podcasting has combined my bent for public service with my bent for teaching and my love of research,” she said. “I really feel that professors have an obligation to the public; we need to translate the knowledge that we have in a very accessible way. And that’s the beauty of podcasting – you can take very important information and hand it to a lot of people, not only in a way that they can access, but also in a way they can use, in a way they can understand. And that’s a really important public service.”