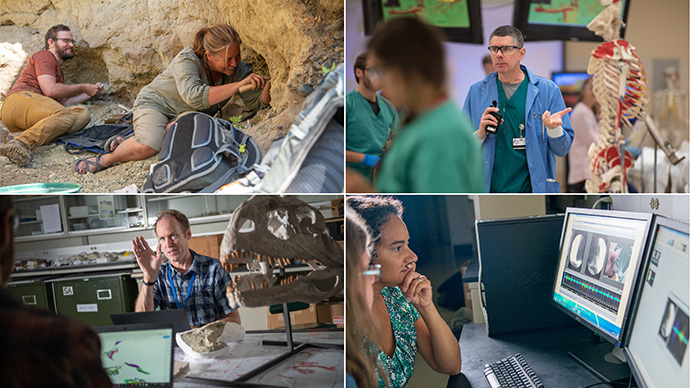 A sizeable portion of the media attention earned by the Ohio University Heritage College of Osteopathic Medicine comes from faculty research discoveries relating to the biology and comparative anatomy of a broad range of vertebrate animals – including extinct ones, like dinosaurs. This research is making a significant impact on the world of science, but what does it have to do with the mission of an osteopathic medical school? More than you might imagine.

As research advisors to graduate and undergraduate students from fields outside medicine, these faculty can count among their trainees a new generation of anatomists, in addition to the multitude of Heritage College-trained physicians practicing around the world. Meanwhile, what they’re learning from their research about living things in general enhances their teaching about one species – Homo sapiens – in particular. And as an added bonus, their scholarly work outside the classroom fits neatly into the holistic vision of osteopathic medicine.

One of the core osteopathic tenets, for example, is that structure and function are reciprocally interrelated. Patrick O’Connor, Ph.D., professor of neuroscience and anatomy, says that when he’s doing paleontology research in places like Egypt, Madagascar or Antarctica, this form/function equation, applied to extinct non-human animals and their environments, helps shape his scientific thinking.

“Our entire research program, on some fundamental level, revolves around characterizing form, and thinking about how it serves a given function or biological role,” says O’Connor, who has played a major part in highly publicized discoveries such as that of Mnyamawamtuka moyowamkia, a hitherto unknown species of dinosaur from the African continent.

Studying how all life adapts

Nancy Stevens, Ph.D., professor of functional morphology and vertebrate paleontology, and another of the college’s news-making research stars, notes that another osteopathic tenet states that the body is innately able to regulate, maintain and heal itself. Expand that notion beyond humans to other species and entire ecosystems past and present, she suggests, and you’re pretty near the concept that helps guide her scientific work in places like Uganda and Tanzania – whether that’s digging out fossils of extinct reptiles and mammals or studying human impacts on modern-day animal communities in the wild.

“The study of environmental change through time, and how organisms respond to that, is a meditation on that self-healing principle,” Stevens says. “Environments and communities of organisms undergo change, constantly reinventing themselves in new and ever more complex and fascinating ways.” Her work has helped to more than double the number of known primate species dating from the late Oligocene around 25 million years ago, and to rewrite the scientific consensus on the age of eastern Africa’s great rift system; she received Ohio University’s highest honor when she was named its Distinguished Professor for 2020.

Lawrence Witmer, Ph.D., professor of anatomy and Chang Ying-Chien professor of paleontology, focuses much of his research on already-discovered fossils. He applies high-tech methods such as X-ray CT scanning, 3-D computer visualization and computational fluid dynamics to “put the flesh back on the bones” of long-extinct creatures and model how they worked. One celebrated example is his recent work with Heritage College colleague Ruger Porter, Ph.D., assistant professor of anatomical instruction, to determine how large dinosaurs may have evolved different types of cooling systems in their heads to maintain brain temperature.

Witmer notes that in puzzling out how an extinct species functioned, it often helps to look at a modern-day relative; birds and crocodiles, for instance, may provide clues about dinosaurs. And anything learned about how any living creature functions (or functioned), he believes, is potentially useful information for medical students mainly interested in Homo sapiens.

Susan Williams, Ph.D., professor of anatomy and winner of the university graduate student senate's 2020 Outstanding Graduate Faculty Award, echoes that assessment. Williams, whose research focuses on living animal species, is an affiliated scientist with the Ohio Musculoskeletal and Neurological Institute. She says her study of the complex, coordinated sensory-motor activities by which different mammals ingest, chew and swallow food, and her evolutionary perspective on how these creatures came to look and function as they do, serve her well when teaching human anatomy to medical students.

“I’m constantly playing in the area of the head and neck, and then I teach head and neck anatomy, so there’s a direct reinforcement,” she says. “But it really goes beyond that. I think the comparative perspective for me is something that helps me explain to medical students – who are really just interested in humans – why the anatomy looks the way it does. Being a comparative anatomist and functional morphologist makes me a better teacher of human anatomy.”

Williams’ research findings have both basic science impact and, in some cases, important human applications. She has used animal models, for example, to study how damage to the lingual nerve in the mouth – which sometimes happens to people during routine oral surgery, such as wisdom tooth removal – can affect eating. And by comparing how raccoons and skunks differ in the way they feed, she is helping to figure out how to improve the effectiveness of vaccine-infused bait pellets used to inoculate these creatures in the wild against rabies.

Some of Williams’ research is done in the field, but most relies on high-tech lab procedures. In X-ray reconstruction of moving morphology, for example, an animal in action – a pig gobbling food, say – is recorded from two angles with X-ray high-speed video. Simultaneously, she uses sensors to record the contraction patterns of the jaw and tongue muscles. Using datasets collected from a diversity of mammals, her lab then generates animated 3-D computer models that they can use to test hypotheses about the physiology, biomechanics and evolution of the complex process that is eating.

The range of Williams’ work has put her in the enviable position of receiving grant funding from both the National Science Foundation for basic science studies and the National Institutes of Health for research with an application to human health. Whatever the focus of a particular research project, she says, “the questions come from, honestly, just my fascination with natural history and trying to figure out how animals work.”

Although what these faculty learn as researchers makes them better teachers in the classroom or anatomy lab, they also use their research projects themselves as teaching environments for graduate and undergraduate students from a variety of backgrounds. Stevens, for example, is working with undergrads from fields including health sciences and professions, arts and sciences, engineering, business and communication.

“I think the biggest link that ties together the kinds of projects I do, and the students who work in my lab, is really curiosity,” Stevens says. “Before my students go into any situation, I ask them to send me 20 questions that they have. And then after we have an encounter, I ask them to send me the next 20 questions that they have, now that they’ve had that experience. And so it’s really all about curiosity and then figuring out how to develop a critical thinking regimen.”

O’Connor says his research, even if its news hook comes from finding a new dino species, is always more about the interplay and adaptation between organisms and environment – a point he conveys to his students.

“My goal is never to find a dinosaur,” he explains. “We may happen to find a dinosaur, but we’re framing that in its environment and its ecosystem, and then expanding that. … The adaptation piece is really kind of central to my whole research program and to every student project I’ve ever supervised or participated in. We are interested in the match between organisms – between how they exist or how we hypothesize they existed in the past – and their environments.”

Making an impact far and wide

And as they’ve been imparting the secrets of human anatomy and neuroscience to future osteopathic physicians, these investigators of form, function and ecosystem have also been training both researchers and anatomists. It’s no coincidence, Witmer suggests, that of 10 Ph.D. students who have gone through his lab, nine are now teaching anatomy in medical schools – including a number of osteopathic schools. Many continue to do paleontology research as well.

“When we train our graduate students, we are in a sense training the next generation of medical anatomists,” Witmer says. “But it also is fantastic training for them as paleontologists. Because the clinical anatomy that we teach is very relevant. We look at the fossil record and we see pathology, we see diseases. Dinosaurs got cancer; dinosaurs broke bones.”

Williams has trained one Ph.D. student who is now teaching human anatomy and doing functional morphology research with exercise physiology majors at High Point University in North Carolina; an undergraduate student of hers went on to earn a doctorate in ecology and evolutionary biology at Brown University, and now teaches anatomy at West Virginia School of Osteopathic Medicine. Another student, a Ph.D. candidate in biological sciences, has accepted a job as a postdoctoral researcher at the Center for Interdisciplinary Research in Paris. Williams says her undergrad students come from a range of fields, including many biology and exercise physiology majors.

“They go all over the place and do all kinds of interesting things,” Stevens observes. “And many of them end up in medical schools.”

And just as these scholar/scientists view form and function as different facets of the same unified living reality, they draw no sharp distinction between teaching and research.

“They’re the same thing,” Stevens says flatly. “Inspiring curiosity – that’s what teaching is. There’s room for every type of thinker; there’s room for every topic of research or aspect of training, as long as you are looking to make the connections and you’re curious about where those frontiers are. That’s been exemplified by the students who come all over the world with us and find that piece that they can contribute.”

“It all fits,” agrees O’Connor. “It all goes together.”