Alumnus follows his ‘restless soul’ to ends of the earth 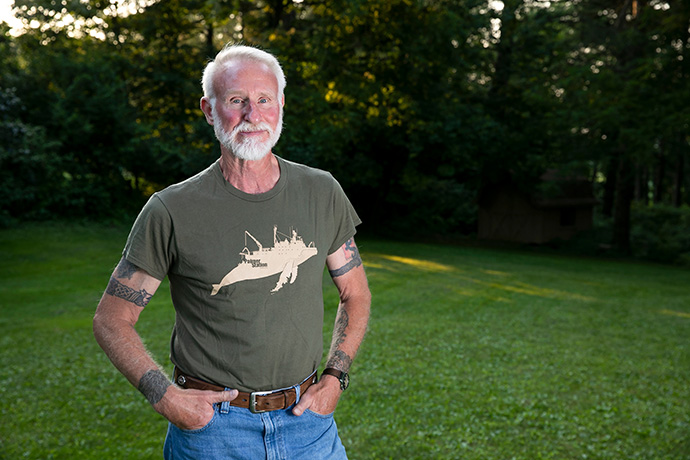 John Allerding, D.O. (’85), remembers July 3, 2015, as a “really perfect night” for his rite of passage at Amundsen-Scott South Pole Station.

The moon was bright and full. Outside, the temperature was lower than minus 100 F – a prerequisite for the “South Pole 300.” As Allerding, who was then the research station’s physician, explains, first “you get in a sauna and crank the temperature up above 200 degrees”; then donning boots, hat, gloves, maybe a scarf – and little or nothing else – you step outside to circle the geographic pole. (Allerding recalls that he also wore a pair of Grinch boxer shorts given to him by his wife.) Sweat from the sauna, instantly frozen on your skin, provides insulation. Twelve to 15 minutes later, you’ve joined the handful of humans who’ve undergone a 300-degree temperature swing, and walked nearly naked through 24 time zones.

Allerding, a U.S. Navy veteran and retired U.S. Army Reserve colonel, was then 63. The Heritage College alumnus has been to Antarctica twice – 10 months at The South Pole Amundsen-Scott Station in 2015 and six at Palmer Station on Anvers Island in the Antarctic Archipelago in 2018. He’ll return to Palmer Station in 2020.

Board certified a family doctor but having practiced mostly emergency medicine, Allerding admits to “a severe case of ‘restless soul syndrome.’” He’s been deployed to combat zones in Iraq, Afghanistan and the Horn of Africa, and served in Germany as backup during fighting in Bosnia and Kosovo.

Born and raised in Loudonville, Ohio, he lives there still with his wife, Peg, whom he calls his “battle buddy” of 33 years, and who’s been a steady supporter of his ventures. Time and again, his wanderlust has taken him across the country and around the world. Allerding joined the Navy at 17 and served till 1973; he signed up with the Army while at Heritage College. While in private practice from 1987 to 1999, he moonlighted in emergency rooms as well as doing multiple active duty tours with the army. From 1999 to 2011, he worked as a locums tenens (fill-in) provider in the United States, as well as continuing his military tours throughout the world. He retired from the army in 2011 and continues his role as a “travelling doctor.”

“I worked on The Havasupai Indian reservation on the floor of the Grand Canyon and in a VA hospital emergency room in Albuquerque,” he says. “The 10 months in Africa in 2004 really got me thinking about more austere environments.”

Allerding looked into Antarctica work around 2006 but there were no job listings for a physician at that time so he “kind of forgot about it.” In 2014, though, he was contacted by a recruiter for The Center for Polar Medical Operations – UTMB Health in Galveston, who thought he’d be "a good fit” for their program in Antarctica. That’s putting it mildly.

“You just can’t explain the South Pole to people; it’s something they have to experience,” Allerding says. “The total isolation, the incredible austerity and severity of the environment, the climate – it was just amazing.” He’s shared his adventures in well-received public talks back home in Loudonville.

Antarctic medical challenges include altitude-related illnesses (flying from McMurdo Station to the Pole, you rise more than 9,300 feet in elevation) and trauma from clearing snow and maintaining the research facilities. “You’ve got people using all kinds of heavy equipment and power tools so injuries like strains, sprains and fractures are always a concern,” Allerding explains. “In addition to providing medical care you also maintain all of the clinic and lab equipment and inventory, take x-rays and provide emergency dental care.”

And as a physician, Allerding has another achievement to set beside his South Pole 300 – one for which he can thank his osteopathic training.

“I did a lot of OMT down there,” he says. “I performed 109 manipulations at the South Pole and 55 manipulations at Palmer Station. I probably have the record for doing the most osteopathic manipulations on Antarctica!” He plans to add to that on future deployments.