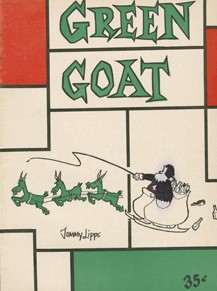 The Green Goat was Ohio University’s pre-eminent humor magazine during many years of the first half of the 20th Century.  The first issue, published in January 1913 by Virgil Falloon and Carl Foss, sold for fifteen cents. The second issue, entitled “Bonehead Number,” was published later during that year. They hoped to gain cross-campus popularity and support as the literary creation of writers representing each of Ohio University’s fraternity and sorority. However, nine years passed before another issue of the Green Goat was published, due  to apparent lack of interest and the very real and serious matter of World War I.

In 1922, the Green Goat emerged anew under a different staff. Although editors often joked about the lack of literary talent exhibited in the magazine,  stating in 1924 that “No apologies are being made for the lack of excellence which it certainly possessed,” the magazine quickly gained wide readership and sound financial support. During the early 1920s the Green Goat was full of advertisements bought by local Athens businesses, and by 1926, the magazine was featuring national advertisements. In fact, the cigarette ads featured on the back cover of every issue reportedly brought in enough money alone to finance the magazine’s colorful and cleverly artistic covers. Further contributing to the success in distribution of the Green Goat during the later 1920s was the recruitment of Ohio University sorority girls as magazine sellers, with each sorority competing to sell the most Goats in exchange for a trophy.

Although the Green Goat of the 1920s and early 1930s was an official Ohio University student publication, it never gained official status at the level of the student newspaper (the Green and White), or the student yearbook (the Athena). The staff of the Green Goat was assigned to a tiny room on the ground floor of what is now known as Old Baker Center (now Schoonover Center) where they were reportedly equipped with “just four hand-me-down desks and two retired Underwood typewriters.”

Nevertheless the magazine continued to flourish on campus until 1933, when, in the midst of the Great Depression, the Green Goat folded.  Staff attributed its demise to printing costs and the difficulty of finding students who could take over the financial risks and put in the long hours necessary to turn out the magazine.

In 1954, the Green Goat re-emerged as an off-campus student publication, and the magazine’s relatively censor-free environment quickly earned it a scandalous reputation around campus and community. Green Goat issues such as “Pla Boy,” which was a parody of the newly popular men’s magazine, and the introduction of the featured “Bobkitten,” which celebrated a different campus co-ed in each issue, added to the magazine’s notoriety. Publication of the Green Goat continued for several years thereafter until 1961.

During its reign as Ohio University’s premier humor magazine, the Green Goat averaged seven issues a year, including such annual issues as the “Frosh Number,” the “Football Number,” the “Junior Prom Number,” and the “Christmas Number,” as well as colorful and popular historically timely issues such as the “Prohibition Number” and the “Russian Number.” As students came and went, staff and quality of the Green Goat fluctuated over the years. Nevertheless, the magazine’s content consistently and simultaneously both embraced student life and mocked it. As one writer concluded, “Many battles have been won by sarcasm, and if you are the one to be hit, remember that it was done for O.U.’s sake, not yours.”

Here are a few sample images from our collection of the Green Goat: 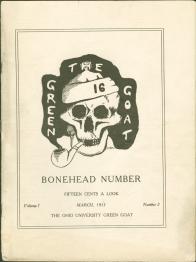 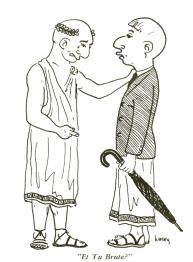