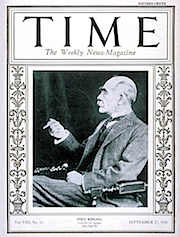 At the turn of the twentieth century Rudyard Kipling was one of the best-known and  most popular writers in the English-speaking world. He was a poet, novelist, journalist, essayist, and short-story writer. He was born in Bombay [Mumbai], India and at the age of five was sent by his parents to England for schooling. He returned to  India in 1882, and spent the next seven years working as a journalist and beginning his career as a creative writer. Many of the poems and stories for which he is most famous have their origins in this period of his life. Among these are Departmental Ditties, and numerous other collections of poems and short stories.

Kipling traveled widely and lived at various times in Vermont, South Africa, and Devon and Sussex in England. Among his best-known works today are the Just So Stories, The Jungle Book, and Kim–all of which have been adapted into movies. He received the Nobel Prize for Literature, becoming the first English-language recipient of that award.

He was a staunch supporter of the British effort in the First World War, even though he suffered the tragedy of his son’s death in the Battle of Loos in 1915. After the war his literary production declined due to ill health. He died in January of 1936.

The Oxford Dictionary of National Biography has a nice summation of his work:

The labels that are conventionally attached to Kipling—‘imperialist’, ‘racist’, ‘jingoist’—express a very superficial knowledge of his work, which eludes all labels in its range and variety. There has yet been no writer of short stories in English to challenge his achievement, which ranges through space from India to the home counties, and through time from Stone Age man to the contemporary world of football matches and motor cars. These stories, moreover, exhibit every kind of treatment, from the farcical to the tragic, and their structures vary from the simplest anecdote to the most complex and allusive philosophical fiction, dense enough to support endless exegesis and commentary.

Our Rare Book Collection has more than 200 volumes by Kipling. We invite you to visit Archives and Special Collections to consult works by Bukowski, or other parts of our collection.  In addition, the Libraries have more than 250 volumes of works about Kipling including biographies and critical interpretations.