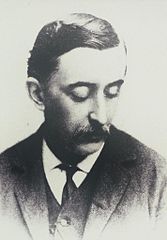 Lafcadio Hearn led a colorful and adventurous life as a journalist, writer, and introducer of Japan to western culture. He was

born Patrick Lafcadio Hearn on the island of Lefkas in Greece (hence is middle name), the son of a sergeant major in the British Army and a local Greek woman. At the age of four, he was sent to Dublin, Ireland to be raised by his aunt, who tried to steer him towards the priesthood as a vocation.

When he was nineteen, his aunt lost most of her money, and Hearn was left abandoned by his family. For several years he was homeless, living in cardboard boxes in London, New York, and Cincinnati, where he eventually wound up working for the Cincinnati Daily Enquirer. While there he achieved much notoriety for the sensationalistic nature of his stories, often detailing the seamier, more gruesome side of life. He also married an ex-slave, Althea Foley, which caused much scandal at the time.

In 1877 he moved to New Orleans, where he resided for about ten years, writing for both local and national publications. His writings were instrumental in the city’s Creole culture; it is said that more books have been written about him than about any other New Orleanian except Louis Armstrong.

After spending two years as a correspondent in the West Indies, Hearn was sent to Japan on another assignment. Quickly abandoning his journalistic assignment Hearn spent the rest of his days in Japan, and it is for this part of his life that he is best-known today. He wrote numerous books on Japanese life and culture, and married Koizumi Setsu, with whom he had four children. Hearn taught western literature in Japanese schools, and eventually at the University of Tokyo as a professor. He died from a heart attack on September 26, 1904.

Among his many works are Two Years in the French West Indies, Glimpses of an Unfamiliar Japan, Gleanings in Buddha-Fields, and many more.

Picture credit: By Frederick Gutekunst and the Lafcasio Hearn Library, via Wikimedia Commons.