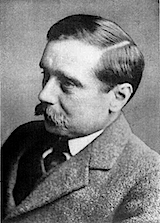 While now best-known as one of the “fathers” of the science fiction genre, H. G. (Herbert George) Wells was a prolific and

versatile writer in many genres, including: standard novels, history, politics and social commentary, and others. Because of his family’s difficult financial circumstances, he did not receive a lot of formal education, but was primarily self-taught, with an initial leaning towards science, especially from the tutelage of Thomas Huxley.

The “scientific romances” (the contemporary term for what we call science fiction today) for which is most famous include The Time Machine (1895), The Invisible Man (1897), and The War of the Worlds (1898). Other, non-science fiction popular novels of his include Kipps (1905) and Tono-Bungay (1909).

He wrote a great deal of non-fiction as well. The Outline of History, which appeared in 1919, was an enormously popular account of all of human history, published in the immediate aftermath of the First World War. He summarizes modern life in words that still ring true today: a “race between education and catastrophe.” Wells was a utopian and socialist, one of the prominent members of the Fabian Society which flourished in England in the early twentieth century. Many of his writings deal with ways to better organize and improve society, for example: In the Days of the Comet (1906) The Shape of Things to Come (1933). In a less positive vein, he predicted the advent of massive aerial war and atomic weapons.

Our Rare Book Collection has nearly 300 volumes by H. G. Wells. We invite you to visit Archives and Special Collections to consult works by Wells, or other parts of our collection. See our Hours on the left sidebar of the Archives and Special Collections home page. In addition, the Libraries have well over 100 volumes of works about Wells: biographies, critical interpretations, and the like.