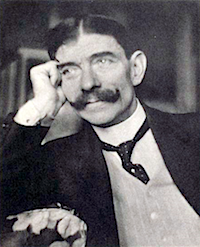 Born in Ireland under the name James Thomas Harris, Frank Harris led and adventurous and controversial life. He ran away from school in Wales and wound up in New York City in 1869. Over the span of just a few years his jobs ranged from boot black to construction worker to hotel manager to cowboy. He eventually got a law degree from the University of Kansas.

Rather than pursue a legal career, though, he opted for literature, and returned to England to become a journalist. From the 1880's until the First World War, he worked for a number of London newspapers and magazines, as well as starting a career as a novelist in 1908 with the publication of The Bomb.

When Britain entered the war in 1914, Harris decided to return to the United States,  where he edited the American editions of Pearson’s Magazine. In 1922 he returned to Europe, to Berlin, to publish his most famous (or notorious) work, a four-volume autobiography entitled My Life and Loves, which purported to detail his sexual encounters over the years.

Among his other works are biographies of George Bernard Shaw, William Shakespeare, and Oscar Wilde, along with various novels, short stories, plays, etc.  Critics often saw the lines separating decency from obscenity and fiction from nonfiction in his work blurred at best.

Our Rare Book Collection has 40 books by Frank Harris. We invite you to visit Archives and Special Collections to consult works by him, or other parts of our collection. See our Hours on the left sidebar of the Archives and Special Collections home page. In addition, the Libraries have a number of books about Frank Harris: biographies, correspondence, critical interpretations, and the like.