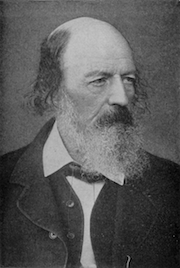 Alfred, Lord Tennyson was one of the most popular poets in Victorian England. Among his many honors, he was appointed Poet Laureate of the United Kingdom in 1850, a position that he held until his death more than forty years later.

A number of his best-known poems relate to his lifelong interest in the legends of King Arthur: “The Lady of Shalott,” “Sir Galahad,” and “Sir Launcelot and Queen Guinevere,” “Morte d’Arthur,” and “Idylls of the King.” Other well-known poems include: “Ulysses,” “The Charge of the Light Brigade,” and “In Memoriam A.H.H.”

He is also the source of many well-known quotations, including:

Tennyson’s long writing career continued until shortly before his death at age 83. He is buried in Westminster Abbey.

Our Tennyson collection is among our more outstanding author collections, consisting of some 300 titles, totaling more than 600 volumes, including first editions, finely illustrated volumes, and collected sets. A particular strength of the collection is the fact that two-thirds of the works were published during Tennyson’s lifetime. The earliest set of collected works is The Works of Alfred Tennyson, Poet Laureate (London: Strahan, 1870). The earliest American work is from 1842: Poems (Boston: W.D. Ticknor). Illustrated volumes include a number by the prominent 19th century illustrator Gustave Dore.

In addition to our Tennyson book collection, the department has the manuscript diary kept by horticulturist, lawyer and member of Parliament James Mangles who summered near Tennyson’s Aldworth in Sussex for two years, 1870-1872. The diary is the subject of the study, Tennyson at Aldworth: The Diary of James Henry Mangles, by Prof. Earl A. Knies (Ohio University Press, 1984). Further information may be found at OhioLINK’s Finding Aid Repository.