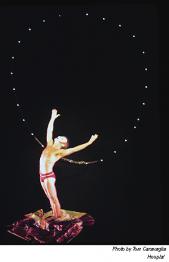 This sub series is part of the Sound Recording series.  These original reel-to-reel recordings have not been preserved.  There are over 500 recordings in 7 ½” and 15” reel format.   They are arranged by artists and chronologically by the premiere date of the choreographic work.  In addition to sound recordings to accompany the dances, additional tapes are included from interviews, advertisements and lectures.  The recording boxes indicate whether they were utilized for rehearsals, performances, or outtakes, as well as if the reel-to-reel is an original or copy.  The time period covered ranges from 1941 – 1996.  Reel-to-reels were received beginning 2000 and continued through 2002.