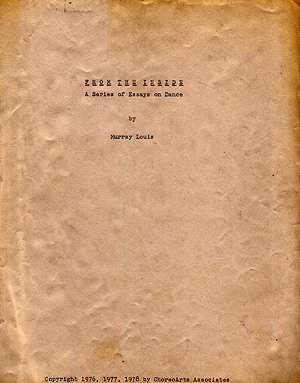 Summary: Murray Louis’ manuscripts are part of the Artistic Series.  Materials include Dance Play Scripts from the 1950’s and 60’s when Murray Louis was the Director of Children’s Dance classes at the Henry Street Playhouse.  Scripts, correspondence, reviews, and letters from the 1980’s film/video production of Dance as an Art Form are included.  The five parts of Dance as an Art Form are, the body as an instrument; motion, space, time, and shape.

Murray Louis has also published several books.  Manuscripts, reviews, and notes from Inside Dance and On Dance are in this series.  Manuscripts and notes from articles and essays published in dance magazines as well as the series of articles, On Then and Now, are included.  Murray Louis frequently was invited to Universities and conferences for speaking engagements.  Typescripts of these speeches are in this series.  Typescripts of interviews with dance educators, choreographers, Dance historians are also included.