Women Pioneers: The 100th Anniversary of Winning the Right to Vote 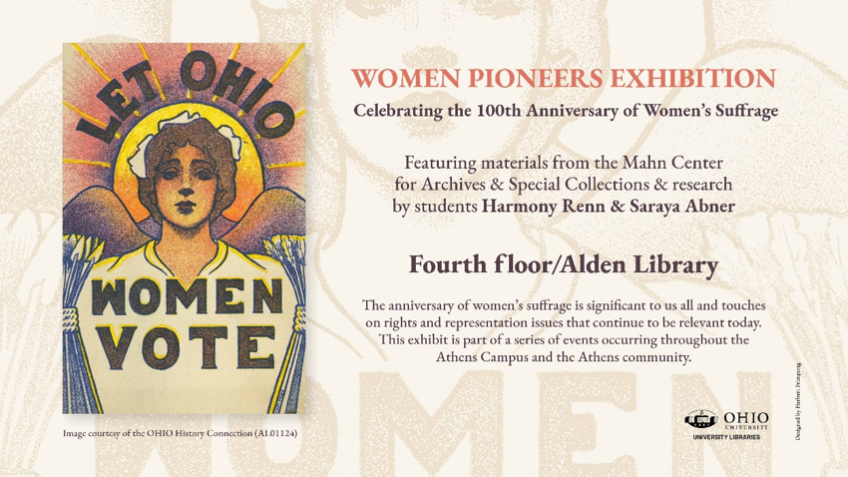 At the beginning of the 20th century, thousands of suffragists nationwide fought to win the right to vote. The drive for equal rights was a relentless battle to sway voters, win elections and finally to strategize the passage of the 19th Constitutional Amendment granting women the right to vote—a monumental moment in the history of women in the United States.

Now, 100 years later, the OHIO Libraries is commemorating that victory, along with celebrations across the state of Ohio and the nation, in an exhibit on Alden Library’s fourth floor titled, “Women Pioneers: Celebrating the 100th Anniversary of Women’s Suffrage,” highlighting key women in the movement and all kinds of materials about women’s roles, their expectations and how those have evolved.

“We are looking at suffrage at Ohio University, in the state of Ohio and nationwide, with glimpses to the international. We are highlighting certain notable women ranging from Sojourner Truth and Helen Keller to Charlotte Perkins Gilman and Susan B. Anthony, and from Ohio University, Irma Voight,” explains Miriam Intrator, special collections librarian. “There are also contemporary artists’ books in the exhibit. Some specifically address suffrage, others explore the role and contributions of women over time.”

According to Intrator, there are also touches of the British suffrage movement like the first edition of “A Vindication of the Rights of Woman” by Mary Wollstonecraft, mother of Mary Shelley, which was one of the first big advocacies for women’s rights written by a woman.

In this particular display, Intrator, co-curator of the exhibit and librarian liaison to the Honors Tutorial College (HTC), worked with Carey Snyder, associate professor in English who also specializes in British suffrage, and with student researcher-curators, Harmony Renn and Saraya Abner.

“They [Renn and Abner] focused throughout the course… on identifying, selecting and researching materials related to suffrage specifically, or to women’s history a little bit more broadly, primarily in the [Libraries’] Rare Book Collection, but also in University Archives and the Manuscripts Collections. All with the ultimate vison of contributing to the exhibit,” explains Intrator.

Intrator used the results of their work in the curation of the exhibit for the January 2020 opening—including their research to write labels for the objects on display.

“They identified an enormous amount of materials; they have done a lot of research and a lot of writing. They have thought about how they might organize this exhibit; what categories and what themes; what it should look like; which books go together in this theme or that theme,” clarifies Intrator. “So, the final exhibit is very much based on their excellent work and contributions.”

In addition to the opening of the exhibit, there is a curator’s Talk & Tour on Feb. 3, 2020 from 4-5 p.m., open to the public, where Renn and Abner will speak about their research and notable items that they think are important.

The impact of women’s suffrage, which really was not very long ago in this nation, is still an ongoing topic of discussion.

In one of Renn’s final reflections for the English 4940 course, she wrote: “I’m sad to have to move on, [but] I am incredibly grateful to have gotten this opportunity. Learning all that I have about the history of suffrage, and [its] first wave [of] feminism, has been so valuable to me, and I know I will be using this research again not far in the future.”

Intrator hopes with this exhibit other students will also look deeper into what most of us consider our basic constitutional right—the right to vote.

“Who has the right to vote is an ongoing issue of dispute in today’s society. I think [it is important] to get people to think about all the different aspects of the issue… [and] how hard women and other groups have had to fight for that right, and how some continue to fight,” Intrator says.

Check out other women’s suffrage events scheduled for spring 2020.