A woman of vision and integrity

The first day Irma Voigt arrived on campus in September 1913, she went to then-University President Alston Ellis and asked for instructions to begin her job. In her journal, Voigt wrote that Ellis responded that he did “not know what a Dean of Women [was] for, or why Ohio University had to have one" and he expected that Voigt did not “know what a Dean of Women’s duties are any more than [he did], so the sooner [she] find out, the better.”

Voigt’s journals are just one part of the Irma E. Voigt Collection held in the Robert E. and Jean R. Mahn Center in Alden Library. The collection contains seven boxes filled with articles, photographs, personal writings, letters, records, and other mementos of Voigt’s four-decade tenure at Ohio University, which began 100 years ago. These boxes serve as a snapshot of student life at Ohio University—and Voigt’s influence on it—from her first day in 1913 through the early 1950s.

According to University Archivist and Records Manager Bill Kimok, the Voigt collection is one of the Mahn Center’s most important collections regarding the history of Ohio University.

“It is obvious from the very first page of Voigt’s description of arriving at Ohio University that she faced challenges in work and attitudes,” he said. “But as one continues through the collection, it is striking what a difference she made in her 36 years of work at OU, not only in the individual lives of the women she worked with, but in changing the culture of college education administration from the male-dominated environment in which she had found it.”

Voigt set up shop at a table in the hallway of Cutler Hall—Ellis did not think she needed an office—and immediately made her presence known on campus. As dean of women, her basic job requirements were to oversee women's dormitories, coordinate women's programming, and handle disciplinary problems. By the end of her tenure 36 years later, Voigt had done much more.

Voigt eventually established an office in Chubb Hall that became an open place for all students or staff. They came to her with their problems and asked for her advice on numerous situations. During the flu epidemic of 1917–18, Voigt even turned her office into a temporary hospital quarters and acted as a nurse to over 300 students who fell victim to the disease. She also invited students to her home for meetings and tea. Over 2,500 students and faculty visited her home each year in the last five years of her tenure.

Voigt’s students and staff also enjoyed her closest companion at the University: her dog Lady, a shepherd and collie mix. Lady accompanied Voigt all over campus—even to meetings, church, and social events. The dog was also a dues-paying member of the Athens Methodist Church and the American Red Cross. In addition, Lady held the rank of private first class in Dogs for Defense, a canine training program that became popular during the First World War.

Irma Voigt was active in many local and national organizations. On campus, she was the chairman of the Campus Affairs Committee, advisor to the Student Council, formed the OHIO chapter of Mortar Board (called Cresset), and established the Red Cross Auxiliary, the first at an American university. She also developed the University's chapter of the YWCA and was a charter member of Kappa Delta Pi, a national educational honorary society. In the community, she was president of the Athens branch of the American Association of University Women and was a member of the Business and Professional Women's Club. Nationally, Voigt served as president of the National Association of Deans of Women from 1935 to 1937, and was a member of the National Education Association.

Her involvement in a vast number of organizations demonstrates Voigt’s dedication to the causes she fought for and the issues she believed in. First and foremost, though, she was dedicated to her female students at Ohio University.

One of Voigt’s major contributions to OHIO was the establishment of the Women's League, the first self-governed body on campus. It was founded to unite the female students and to develop “spirit, loyalty, and standards” both politically and socially. The Women’s Union had a great deal of support on campus as it strived to dissolve the separate codes of conduct and rule differences for male and female students. The parallel organization, the Men’s Union, was not established until nearly eight years later. The two unions later combined to form what is today's Student Senate.

Voigt was devoted to her female charges personally as well. She held “fireside chats” at her home, where the girls sat on the floor drinking tea; listening to Voigt read stories, prose, and poetry; and discussing women’s issues and politics.

During her three decades as Dean of Women, Voigt received letters from hundreds of groups and individuals, including Theodore Roosevelt. Some of the other letters in her archived collection today include correspondence from Albert Einstein, Eleanor Roosevelt, Helen Keller, Jane Addams, and several Governors of Ohio. Many, like Einstein and Keller, asked Voigt to raise awareness and money for different causes such as atomic energy and the American Federation for the Blind. Eleanor Roosevelt and Voigt often wrote about visiting each other and what Voigt was doing to improve the lives of her students and women.

Voigt had to improve her own life as well. While fixing a flat tire on her big sedan in 1925, the car slipped from the jack and she tried to hold the car from slipping. Two weeks later, she discovered her sacroiliac had been dislocated and adhesions had developed; so she was on crutches for two years. Many of her colleagues believed that had she not made up her mind to walk again, she would have been on crutches for several more years. It was believed that her determination (along with painful medical treatments) aided her recovery.

Overcoming her injury allowed Voigt to once again participate in one of the main social events for students on campus—dances. The most popular was the Junior Prom, or J-Prom, put on by the junior class. Bands were brought in from all over the world to provide music, including Duke Ellington and Benny Goodman. The prom king and prom queen titles were so coveted that students hired campaign managers in their quest for selection.

The J-Prom was so popular that Voigt developed the idea for the Co-Ed Prom, put on by the female students of campus. The girls asked the boys for dates and a contest was held for the best handmade corsages that the girls made for the guys. The corsages were often made out of vegetables and were very elaborate. One major difference was that the ticket cost had to be affordable so everyone could attend, unlike the expensive tickets required for J-Prom. Voigt attended the majority of campus dances and was remembered as a wonderful dancer.

Voigt also organized other social traditions on campus, including the annual Skit Show performances that raised money for the student loan fund and the May Day celebration held on College Green. Many of these traditions continued even after Voigt’s retirement on June 30, 1949.

Voigt remained in Athens and a part of the Ohio University community until her death on May 9, 1953. “If it is true that the passing of an individual means the passing of an era, then Dean Voigt's death means the end of a great era for Ohio University,” said then-President John C. Baker. “She was not only a forceful leader but [also] a maker of tradition and a person who developed a large following. Wherever Dean Voigt is known, her influence has been felt.”

Her legacy continued through the 1954 construction of a women's residence hall, which was named in her honor. Located on East Green at 34 College St., Voigt Hall is still decorated in Voigt’s favorite colors of blue and maroon and is the only remaining women-only dormitory on campus. The residents pass Voigt’s portrait overlooking the hall lobby whenever they come and go.

“Many residents still believe that it is impolite and possibly unlucky to pass Irma's portrait without giving some form of acknowledgement,” Kimok said.

Only three other women held the title “dean of women” after Voigt before the position was eliminated in 1962. None of her successors held as much power as Voigt did or had such an impact. During her tenure, female enrollment nearly quadrupled, sororities opened their own individual houses, and women had more freedom from the classroom to the dance floor. She witnessed major changes to the University, including its expansion from two colleges to seven and the establishment of schools of journalism, home economics, music, speech, and dramatic arts. She saw the University through two world wars, an influenza pandemic, Prohibition, and the Great Depression. As a result, the Voigt Collection is a time capsule not only of life on the OHIO campus, but life for university students all over the country during a tumultuous period of history.

“A woman of vision, who dared where others hesitated; a woman of personal integrity, whose example inspired with courage those with less personal honesty; a woman who commanded strong personal affection and loyalty in those with whom she labored; a woman whose personal and professional life was notable in her untiring effort to further the best interests of all women, everywhere.”

—The Ohio Association of
Deans of Women 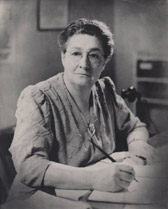 Irma Voigt served as dean of women for 36 years, from 1913 to 1949. Voigt Hall, which bears her name, is a women's dormitory located on South College Street, next to Howard Park.