Ohio University is one of the largest users of energy in the state of Ohio. As such, we need to be particularly careful to make sure that our energy use is sustainable, meaning that it simultaneously benefits people, the planet, and prosperity both now and in the future. The use of renewable energy, while not perfect, has the potential to reduce current and long-term impacts to public health, the environment, and the operational costs of the University, and to improve resiliency in the event of natural disasters.  Ohio University is proud to be a US EPA Top 30 College and University Green Power Partner for its purchase of renewable energy credits (RECs) for 100% of its electricity usage.  The University is actively pursuing solar installations for all of its campuses. 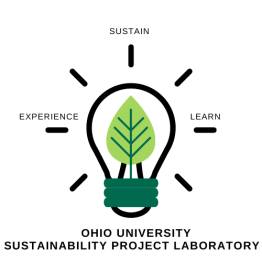 The Sustainability Project Laboratory is a database of sustainability-related project proposals. This resource hosts projects and project ideas that can be adopted by faculty, staff, and students for course projects, capstone or senior projects, theses, and more.

To find energy related projects just type "energy" into the search bar at the top of the database, or click the Sustainability Project Laboratory icon.

The Association for the Advancement of Sustainability in Higher Education (AASHE) is currently revising its Sustainability Tracking, Assessment & Rating System (STARS), which Ohio University uses to measure its sustainability efforts. You may view a draft of the proposed updates here.

The 2017 Transportation infographic outlining progress towards the 2011 sustainability benchmarks and new goals set for fiscal year 2026. Click the tabs below to learn more! 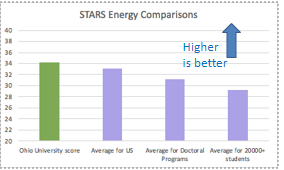 AASHE STARS compares programs across the nation in many different categories. Ohio University reports above the national average in energy.

Goal 2:  Decrease reliance on fossil fuel energy, hereby increasing the percent of renewable energy (defined by AASHE STARS, p 5 of Technical Manual, OP6) in electricity, cooling, heating, and transportation (including, but not limited to, gasoline & diesel used to operate OHIO fleet vehicles, as well as fuels used in commuting by faculty, staff & students, as required by the  SIMAP Reporting Platform) from 18% to 36% 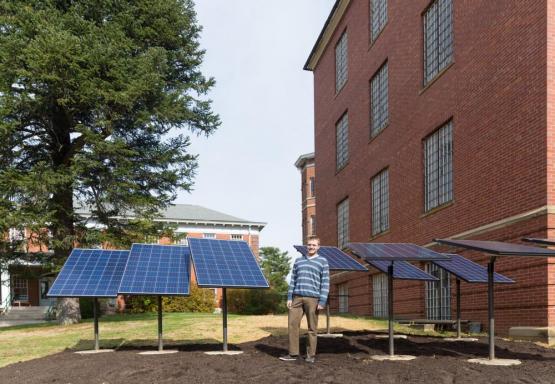 Nine 260 W (DC) solar panels were installed next to Building 22 on the Ridges by Athena Solar Panels in October, 2016. The installation project was initially managed by a graduate student in Environmental Studies, Alex Burke, and data from the panels was used in his master's thesis. Output from the array is tracked through an Enphase Enlighten dashboard. 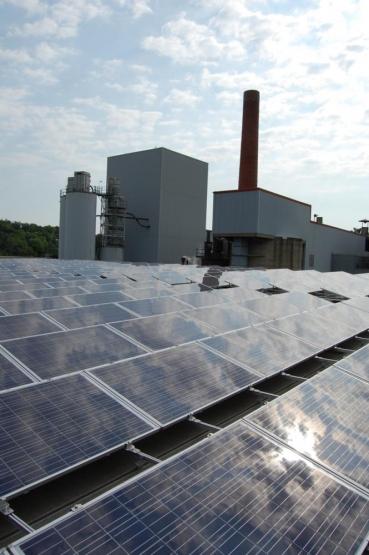 This project was completed in 2012 and included: the installation of a 61.1 kW photovoltaic array by Dove Tail Solar and Wind on the roof of the storage shed adjacent to the Lausche Heating Plant; the installation of safety rails; and dedicated access to the roof in order to accommodate equipment maintenance. An architectural and engineering analysis concluded that structural upgrades to the storage shed were unnecessary. Output from the array is monitored through a sub-meter that is available for use for educational purposes. 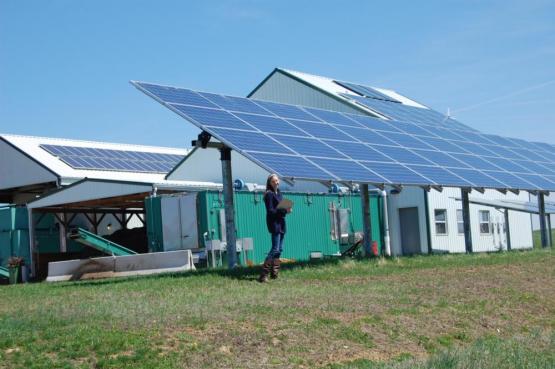 Ohio University is home to the largest in-vessel compost system at any college or university in the nation. There are currently 41.1 kW of photovoltaic panels at the Compost Facility. A 10kW system was installed in 2008 by Dovetail Solar and Wind, and a 31.1kW system was installed in 2012. The compost facility also has Solar Thermal mounted on the roof of the second building. The Solar Thermal system heats the greywater used to clean the compost bins. Output from the arrays is hand tracked daily by compost operators. 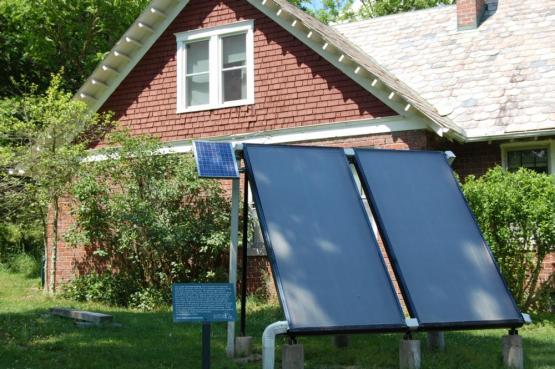 The OHIO Ecohouse is a residential learning experience for off-campus-eligible students at Ohio University. A 2.4 kW was installed in 2005 by Dovetail Solar and Wind. The system is mounted on a tall frame in the yard of the Ecohouse since the house is situated in a holler and, therefore, does not have access to direct sunlight. On the opposite side of the house is a small Solar Thermal system that helps reduce the energy used for heating water for the residents. Output from the solar systems is tracked through EnergyCAP. 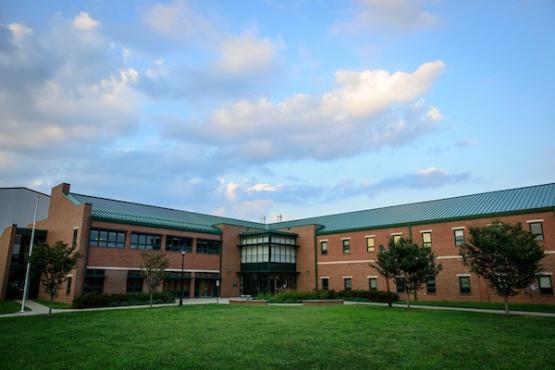 Two other PV arrays were installed in 2003 by Third Sun Solar and Wind Power. The West Green Chilled Water Plant has a 2.4 kW PV array and Chubb Hall has a 0.33 kW PV array. The generation from these older arrays is not currently tracked by Ohio University.

All solar PV systems at Ohio University are grid-tied.

Note: These questions were originally asked and answered for the Davidson College Energy FAQ. They were created by Claire Naisby, who was an energy manager at Davidson and then a Building Systems Integration Manager at Ohio University.

Where does the electricity (kWh) at Ohio University come from?

What is the energy resource mix used to generate Ohio University's electricity?

Ohio University purchases Green-e certified renewable energy certificates (RECs) for 50% of all electricity used on its Athens, Dublin and regional campuses. The RECs are purchased through AEP Energy and are from wind power. The other 50% of the electricity is purchased through AEP Energy from regional generation sources that use a mix of Coal fired power plants (33%), Nuclear power plants (37%), Natural Gas fired plants (25%), Wind (2.5%), Hydro (1.5%), Biomass (0.5%), and Other (0.5%) (projected data for 2017). AEP Energy's environmental disclosures which detail their generation sources can be found at this link.

What are the factors affecting electricity prices?

Power companies must have generation capacity equal to the maximum momentary demand of its customer base. At all other times, power companies have excess capacity. Ohio University controls a portion of its energy cost by managing its peak energy consumption by shifting loads in our West Green Chilled Water Plant; as the campus approaches its peak consumption each day, the facilities team utilizes the steam turbine chiller for as much load as possible instead of our electric chillers.

Learn more about the factors that affect electrical prices here and here. Ohio is a competitive choice state regulated by the Public Utilities Commission of Ohio. Learn how that affects the state's energy prices.

How much electricity does Ohio University use?

In the last three years Ohio University has purchased the following:

How is the campus heated and cooled?

The central steam plant, Lausche, houses four steam boilers that supply steam to most of the buildings on the Athens campus north of the Hocking River. The steam boilers are fueled by natural gas, and can use ultra-low sulfur diesel fuel as a backup. Since Thanksgiving, 2015 coal has not been used in the steam boilers. Steam is used to heat buildings, generate domestic hot water, run absorption chillers and a condensing steam turbine chiller, and for some cooking, steam dryers, and laboratory research.

There are several buildings based cooling systems with their own chillers throughout campus. Some less modern buildings use window AC units.

The buildings have various kinds of Air Handling Units (AHUs) and Fan Coil Units (FCUs) and many other technologies that supply conditioned air to the occupied spaces.

How much natural gas does the heating plant purchase each year and where does it come from?

Ohio University purchases its natural gas for Lausche from IGS Energy, a privately-held, Ohio-based corporation which delivers all of natural gas to the campus through our local distributor, Columbia Gas.

In the past 3 years, the University has used the following amounts of natural gas and #2 ultra-low sulfur diesel fuel (totals include both; the majority of the fuel usage is natural gas since the diesel fuel is only used as a backup):

Why does Ohio University no longer use coal for heating?

How is the temperature in campus buildings controlled?

Most of the academic and office buildings are controlled by an energy management and control system utilizing Direct Digital Controls (DDC). There are manual thermostats in several residence halls and independent residences. The manual controls are replaced with digital as the systems are upgraded.

The temperature of each occupied space in the buildings with DDC controls is set based on Ohio University Facilities Management set point guidelines. The energy management system maintains a balance between occupant comfort level, humidity control, and energy efficiency.

Which renewable energy systems are being considered for the campus?

Is Ohio University engaged in any ongoing energy projects?

How can I save energy in my dorm, office, or home life?

The simplest way to save energy is energy avoidance (e.g., using natural lighting in the room instead of artificial lighting), but more tips are listed below. You can also find suggestions on the "Tips for Sustainability" page.

Visit The Office of Sustainability on Social Media 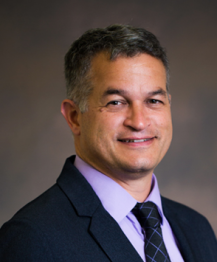 The Sustainable Infrastructure Hub is currently led by Dr. Jesús Pagán, associate professor in the Department of Engineering Technology and Management in the Russ College of Engineering and Technology.

Check out the new mAppAthens: Energy and Biofuels Tour!

The Durable, Bipartisan Effects of Emphasizing the Cost Savings of Renewable Energy