Therapeutic Peptide for Obesity and Diabetes

Obesity is a significant public health problem. Statistics show that 70% of U.S. adults are considered overweight or obese and 17% of children under the age of 19 have obesity 1. Being overweight or obese puts a person at risk for many other health problems, including heart disease, type 2 diabetes, and cancer 2. As a result, the cost of obesity to the U.S. healthcare system is estimated to be $147 billion, with additional productivity costs between $3.38 and $6.38 billion 3.

While there are treatments for the comorbidities associated with obesity, these treatments do not target some of the major underlying issues associated with the condition. Research at Ohio University has led to the discovery of a peptide that can target the root cause of obesity, especially fat storage and breakdown (fat turnover), treating the disease and minimizing the risk of developing type 2 diabetes and other associated maladies. Impaired fat storage and breakdown leads to increased circulatory free fatty acids, which is a major risk factor for lipotoxicity. Free fatty acid deposits can impair insulin signaling in various tissues and organs like the liver, muscles and pancreas with the onset of insulin resistance in patients with type 2 diabetes and/or obesity.

The peptide discovered by scientists at Ohio University targets the pathway of fat turnover to optimally regulate fat storage and breakdown which ultimately corrects insulin resistance in the fat tissue of obese humans. 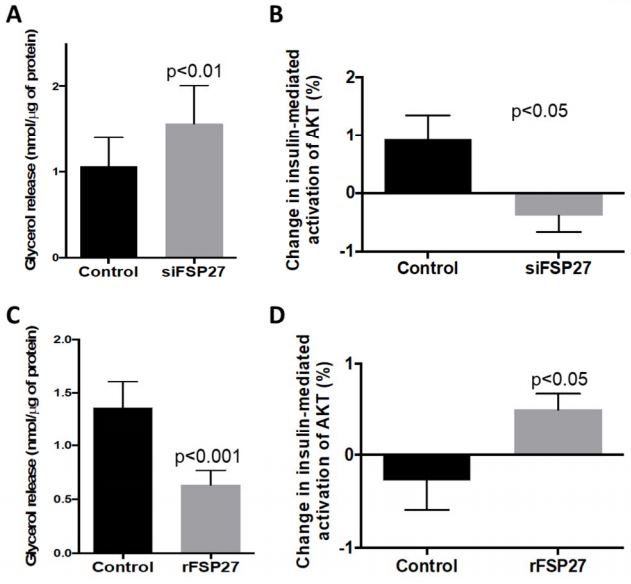 Vishwajeet Puri, Ph.D. is a Professor in the Department of Biomedical Sciences and the Diabetes Institute. Since 2015 he has been a Heritage Endowed Professor at the Heritage College of Osteopathic Medicine (HCOM), Ohio University. He is an accomplished cell biologist with 17 years of research experience in the area of lipid transport and metabolism and over 9 years of experience in fat metabolism in relation to metabolic disease including obesity, type 2 diabetes and cardiovascular disease. After finishing his PhD in lipid Biochemistry from a prominent institute in India, Institute of Microbial Technology, he performed his postdoctoral studies in lipid Cell Biology and Molecular Biology at Mayo Clinic, Rochester, MN. Following that he was a junior faculty at Umass Medical School, Worcester, MA for 5 years and then moved on to establish an independent research program at Boston University School of Medicine (BUSM), Boston, MA. After 6 years of accomplished research at BUSM, he was recruited at Ohio University to establish a research program in the area of Obesity and Diabetes. He pioneered the identification of FSP27 and Cidea as lipid droplet associated proteins with a significant role in fat metabolism and improved metabolic health in humans. His research has been funded by National Institute of Health, Ohio Heritage Foundation and HCOM.

John J. Kopchick is an internationally recognized leader in the growth hormone field. Since 1987 he has been the Goll-Ohio Eminent Scholar and Distinguished Professor of Molecular Biology in The Edison Biotechnology Institute and the Heritage College of Osteopathic Medicine at Ohio University in Athens, Ohio. He attended Indiana University of Pennsylvania (IUP) and received his B.S. and M.S. degrees in Biology/Chemistry. His Ph.D. in Biomedical Sciences was awarded in 1980 by the University of Texas at The M.D. Anderson Cancer Center in Houston, Texas. He then performed postdoctoral studies in molecular virology at the Roche Institute of Molecular Biology, Nutley, N.J. Following that, he was a group leader in molecular medicine at Merck & Co., Rahway, N.J. Dr. Kopchick and his group were the first to discover and characterize GH receptor antagonists, an accomplishment for which he and Ohio University were awarded several US and European patents. He also was instrumental in founding a company, Sensus, which applied his research to the development of an FDA approved drug called Somavert (Pegvisomant for injection) which is marketed for patients with acromegaly. Royalties from the sales of Somavert has yielded ~$90M to Ohio University. Dr. Kopchick has published more than 350 scientific articles and serves or has served on the Editorial Boards of Endocrinology, Molecular Endocrinology, GH & IGF-1 Research, Pituitary, and The Journal of Biological Chemistry. He is Past-President of the Growth Hormone Research Society and currently is a member of their Counsel. He has received many awards including the British Endocrine Society Transatlantic Award (2011) and the title of Ohio University Distinguished Professor in 2012. He has advised 30 Ph.D., 14 M.S., 35 Post-doctoral fellows, and over 300 undergraduate students in the molecular aspects of growth, diabetes, and aging.

Vishva M. Sharma received his Ph.D. in Biotechnology/Molecular Biology from the Institute of Microbial Technology, (IMTech), India and is a research Scientist at the Ohio University Heritage College of Osteopathic Medicine in Athens, Ohio. He was instrumental in developing thermotolerant yeast strains with enhanced ethanol productivity. Royalties from the sale of that yeast strain has yielded ~Rs 2.2M to IMTech, India. He has received awards from Lymphoma Research Foundation (US), American Cancer Society and Council of Scientific & Industrial Research, India.

The ability of FSP27 to regulate fat metabolism and improve insulin signaling and angiogenesis in vivo has been demonstrated utilizing primary adipocytes or adipose tissue isolated from human subjects.

In addition, studies using recombinant FSP27 showed the same positive outcome as using FSP27 expressed in an adenovirus; therefore, the therapeutic can be delivered as a recombinant protein versus relying on viral vector-mediated administration.

Recombinant FSP27 can be formulated as a therapeutic for targeting obesity and its underlying causes. By targeting the mechanism of the disease, FSP27 can decrease or eliminate the need for other medications, including those that treat type 2 diabetes. It is envisioned that this treatment will dramatically improve the health and quality of life for millions of adults and children suffering from the effects of obesity. Ohio University is seeking a collaborative partner interested in pursuing a novel treatment for tackling this debilitating condition.