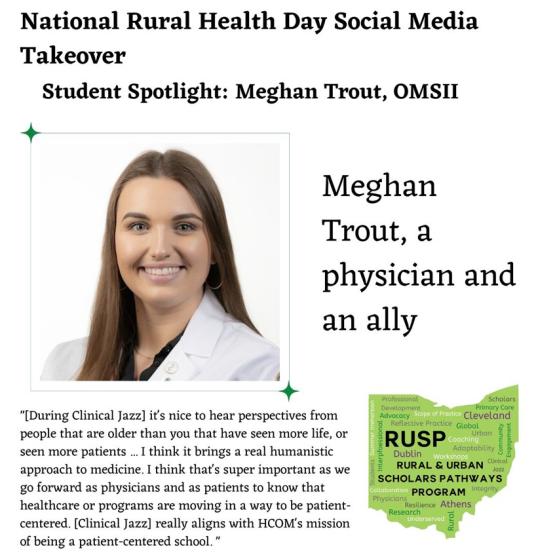 When thinking about her professional future, Meghan says, “I've lived in rural America my whole life, so it's definitely a draw to serve rural populations. But, I also have a draw to serve urban populations as well. Specifically with women, I'm interested in OBGYN and providing women with the healthcare that they deserve and believing all women when they come to me.”

“Right now, my desire is with underserved populations,” she says.

Meghan shares that the Rural and Urban Scholars Pathways Program and its opportunities have been above and beyond.

“Honestly, RUSP has exceeded my expectations. The biggest thing that we do is monthly meetings with our Clinical Jazz group, which is a small group of students that you stay in throughout your four years, because you can join RUSP anytime in your four years,” she says.

“Clinical Jazz is my favorite. I thought it was going to be this educational, sit down, take notes, kind of another lecture. It’s really not that, it's like, an hour and a half of community time with your colleagues.”

She shares the value of receiving multiple perspectives on varying issues.

“There's a professor or two, or a faculty member or administrative staff with you. [During Clinical Jazz] it's nice to hear perspectives from people that are older than you that have seen more life or seen more patients … I think it brings a real humanistic approach to medicine. I think that's super important as we go forward as physicians and as patients to know that healthcare or programs are moving in a way to be patient-centered. [Clinical Jazz] really aligns with HCOM's mission of being a patient-centered school. "

“One thing I'm passionate about is believing Black women in healthcare, which is why I'm interested in urban medicine. There's such a disconnect and I feel like I have the privilege being a White person to be able to not only assist my fellow Black physicians, but being that physician that's an ally,” she says.

“It's not on Black physicians alone to close that racial disparity and that gap in healthcare. I think that's super important, and to see my other fellow White classmates also be interested in that as well I think is super important and encouraging to know that healthcare is going in the right direction to be better than it's been in the past. It just doesn't happen with one physician alone. You could do all the work, but you have to know that the colleague that you have standing next to you is doing the same and the colleague in a hospital that's 50 miles away from you is also having that same vision. So, I think that's really important.”