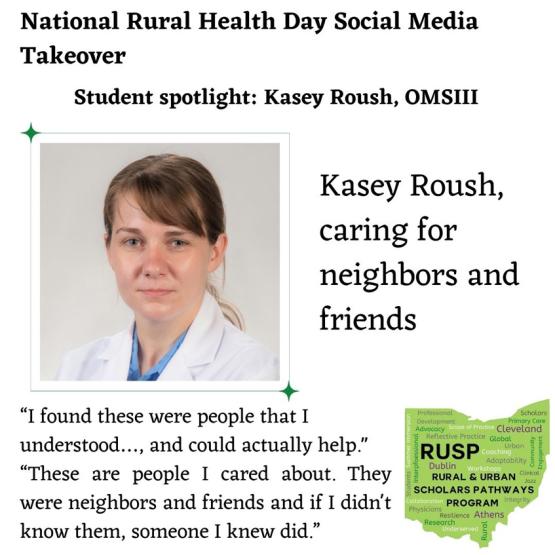 Kasey Roush is a third-year medical student at the Heritage College. She is from Meigs County, which is just south of Athens County. She participates in the Continuity in Primary Care Longitudinal Integrated Clerkship (LIC) elective program at HCOM. She is currently working with Dr. Anzalone, a primary care provider in Logan, Ohio. She has also been in Rural and Urban Scholars Pathways (RUSP) program since she started medical school. RUSP is a co-curricular program offered at HCOM that includes professional development, reflective practice, and coaching for students interested in practicing in rural and underserved communities.

After completing her undergraduate degree at The Ohio State University, Kasey found herself back home in southeast Ohio. She was able to fall in love again with the area and the people who live there.

“I found these were people that I understood…, and could actually help,” she says.

“These are people I cared about. They were neighbors and friends and if I didn't know them, someone I knew did.”

Kasey shares that the LIC program and its continuity of care has been extremely beneficial.

In the LIC program, you could actually see these patients over and over again, which is something that you don't get in medical school because your rotations are for four weeks. You go, you see people, they might come back again, but you'll never see them again,” she says.

“The reason I love primary care is that continuity. There's more to it than just that one visit.”

Kasey shares what being in the RUSP program has meant to her, and connections that she has been able to build through program activities including critical reflection groups (Clinical Jazz).

“RUSP has been really good. With our orientation with RUSP, I actually was with another first-year student who has become my best friend here at HCOM, which was amazing because I got to meet her before actually going to school. She's in Toledo now on her rotations, but we still text all the time. She's been my best friend, and we're in Clinical Jazz together,” she says.

“It was just a camaraderie building thing that I wouldn't have had without RUSP. RUSP has introduced me to so many great people that are passionate about rural health that I find camaraderie with or mentorship with.”

Alongside these connections, Kasey also shares different opportunities presented to her through RUSP including presenting a research poster at a national conference.

“I was able to go to the National Rural Health Association Annual Conference in May in New Mexico and that was amazing for me because I grew up very poor. I had never gotten to travel anywhere. It’s been very beneficial to me being a part of it and everything that comes along with it and the great people you meet along the way.”