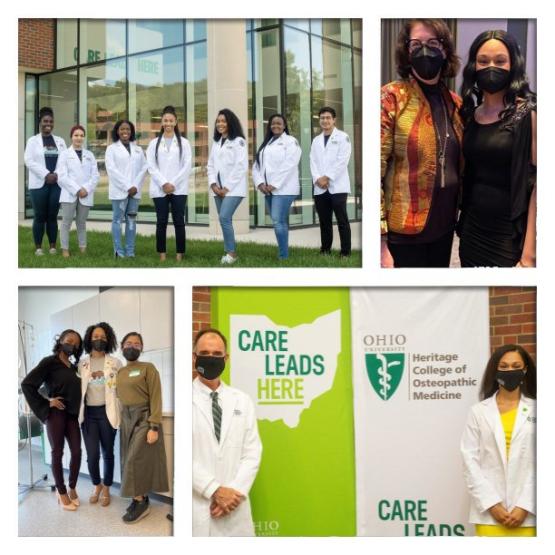 In January 2022, prospective students got a taste of what it would be like to become a medical student at the Heritage College of Osteopathic Medicine. This was thanks in part to Student National Medical Association Chapter President Kiara Patton, OMS II.

“I’ve wanted to be a doctor since I was 6 years old,” Patton said. “My interest piqued while going to community health events with my grandmother and the Black Nurses Association. She taught me how to take blood pressure, feel a pulse and listen to the heart. I’ve always loved anatomy, learning and, of course, helping others.”

The Heritage College’s motto is “Care Leads Here.” It’s one that Patton believes the college lives up to.

“From the moment we start orientation, we learn what patient care is about, what being caring means and how to be the leader of a team,” Patton said. ”I appreciate that HCOM doesn’t just say that [osteopathic medicine] is about the body as a whole but actually teaches and practices that way. We are taught to think about the body as a functional unit, including biochemistry, mind, spirit and external factors like social determinants of health. The faculty do a great job at integrating it all and ensuring that we’re well-equipped to treat even the most complex patients.”

From the beginning, Patton knew she wanted to get involved at the college, but a leadership role, such as being a chapter president of SNMA, was not yet on her radar.

“After serving as one of the SNMA first-year liaisons for the Athens campus last year, I realized that I wanted more, personally, professionally and as a chapter of a national student organization,” Patton said. “One of my goals is to win SNMA Chapter of the Year for our region, and so far, we’re in the lead. I think my transition was easier than most because I knew there would be a lot of work to do, since it’s a national organization.”

Patton’s scale of impact reaches farther than just her academic path, however. She is also the treasurer of the Pediatrics club, member of the Lifestyle Medicine and Student American Academy of Osteopathy clubs, Rural and Urban Scholars Pathways Program participant and an Inclusion Scholar.

“For my Inclusion Scholar project, I am partnering with teachers at local schools to create a S.T.E.M. and Medicine program for young girls in grades 4-5,” Patton said. “I believe mentorship, representation and early exposure are critical for this age group to feel empowered, explore different careers and promote resiliency.”

Patton has some advice for those who are thinking of pursuing a medical career but may not have the confidence to find a place to begin.

“This day in age, almost everyone has access to the internet,” Patton said. “Do your Googles and start collecting information. Reach out to the premedical advisors at local colleges and universities for information on how to get to college and ultimately to medical school. Most importantly, do not be afraid to ask for help. The worst someone can say is ‘no.’ A lot of colleges and medical schools have mentorship programs; seek them out and get a mentor early!.”