Sherie Steinberger first learned about a book project dealing with Ohio’s opioid crisis when she received an email sent to all Ohio University employees, seeking first-person accounts to include in the book. “Right away, it caught my eye, and I thought it was something my family would be interested in doing,” recalls Steinberger, executive assistant at the Heritage College of Osteopathic Medicine at Cleveland.

What she and her family added to the volume conveys a heartfelt message about the value of honesty – and the danger of stigma – for those helping a loved one battle addiction.

Heritage College faculty members Daniel Skinner and Berkeley Franz edited the book, “Not Far from Me: Stories of Opioids and Ohio,” which was published earlier this year by The Ohio State University Press. The book collects personal responses to the opioid epidemic – essays, stories, photos, artworks and poems – from a diverse group of more than 50 Ohioans to paint a picture of the crisis at the personal and community level.

One of the goals Skinner and Franz had for their book, and for a series of public forums they hosted around the state this summer, was to reduce the stigma of opioid addiction, freeing Ohioans to confront the problem more openly. That’s a goal that resonates with Steinberger and her husband, Alan, who struggled for years to find help for their drug-addicted son, AJ. That struggle, they now recognize, was only made harder by stigma and shame.

“We did the exact wrong thing at the beginning, when all this started,” Alan Steinberger says. “We did everything in the world to hide it from people. We wouldn’t tell anybody about it. We tried to cover up any of the times that AJ got arrested. But as 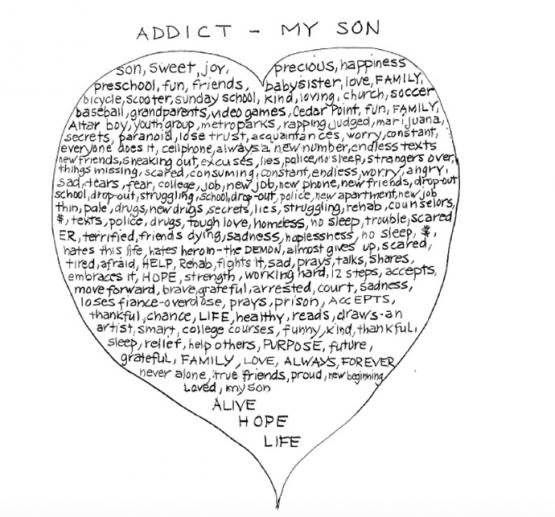 time went on, and as he progressed, we realized that that was the wrong thing to do. And we decided to tell people about it and to ask people for help.”

“We had cut ourselves off from everybody,” Sherie confirms. “We stopped going to church. We stopped going to events. We stopped doing everything because we’d look around and we’d think, ‘Do they know? Do they know?’ It was an awful existence. We should be teaching people that addiction is a problem; it’s a disease. It’s not something to be ashamed of. It’s something that we all need to try to help each other with.”

After finally undergoing a successful rehab program and suffering the loss of his fiancé to a fatal heroin overdose, AJ is now in recovery. He’s working to turn his life around while serving a 12-year prison sentence in connection with the death of a friend who overdosed on fentanyl he got from AJ. In their chapter in “Not Far from Me” each of the four Steinberger family members – Alan, Sherie, AJ and his younger sister, Jenna – share their views of the ordeal of AJ’s addiction.

Jenna’s account is a timeline, logging moments remembered through the years. In childhood, it’s snapshots like “building forts… riding scooters.” In her early teens, she recalls wondering “Why is dad so mad?” and “Why isn’t my brother home very much?” As the years go by, she includes more and more entries like these: “How come the money from my piggy bank is missing? Who stole my tablet?” and “Police ringing the door… Crying in my bedroom.” Finally, with AJ’s successful rehab and the start of his prison term, sunlight begins to emerge from the clouds: “Having my best friend back… Brother: ‘You’re the best sister ever. Thank you for being my best friend.’”

Jenna is now a senior at Ohio University studying psychology and biology, and has been accepted as a medical student through the Heritage College’s Early Assurance Program. She says she wrote to counter the snap judgments she saw of AJ’s drug dependency. “Just from the perspective of being in high school at the time when my brother went through it, a lot of people just thought that he was this bad kid; they didn’t understand that addiction was something he was actually struggling with,” she said. “It wasn’t just all for fun. It was something really hard for him and for everybody who was trying to support him. So I think people definitely need to be aware of what addiction really is and how hard it is.”

AJ himself, writing on the eve of his transfer to prison and again shortly after his arrival, sees incarceration as a chance to start over. “I still believe to this day that I am lucky to be alive – and lucky to have another opportunity at life,” he writes. Like his sister, AJ is enrolled at Ohio University – in his case, through a correspondence course.

For their part, Sherie and Alan Steinberger have become activists, speaking publicly about issues such as the challenges they encountered in trying to find adequate medical help for their son. Based on hard-won insight, their advice to others grappling with a loved one’s addiction is simple.

“Talk,” Sherie says. “Don’t keep it a secret. Don’t be ashamed. Talk to your friends; talk to your family; talk to your children’s friends and their families. And try to get help. We always wonder: If we would have done that at the beginning, could it have made a difference? We don’t know. We’ll never know. But once we finally came out with it, it was beneficial, at least to us, to our family, in trying to deal with it. Because we weren’t trying to hide all the time.”