By American College of Osteopathic Internists 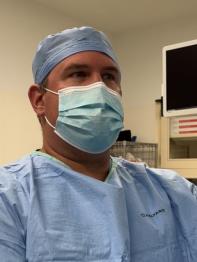 As the only pulmonologist at The Bellevue Hospital in Bellevue, Ohio, a hamlet of just over 8,000 people, Nathan P. Samsa, DO, FACOI, knows there's something special about developing relationships with his patients. Born and raised in rural eastern Ohio and practicing today in rural northwestern Ohio, he finds that he often spends a lot more time than a typical office visit treating patients. Frequently, consulting with them on topics that sometimes extend beyond just health concerns, he's the quintessential portrait of a small-town doctor who wears many hats.

"I think it helps me understand and empathize with my population because in the rural area where I grew up, they had many of the same issues that I now see in my own patients," he says. Some may say that is just the way it is in rural America. For Dr. Samsa, he just thinks it is the right way to practice medicine.

His connection with his rural population stems from growing up in the town of Strasburg, Ohio, 70 miles south of Cleveland, situated in the heart of Amish Country, a place where horse and buggies on roads are a common sight. As a young undergraduate, he headed west and ventured to the other side of Ohio to earn his undergraduate degree in pharmacy from the University of Toledo.

Working as a pharmacy intern and then as a pharmacist, he had positive interactions with physicians that eventually led him to striking up a conversation with a family friend, a DO, specializing in pathology. He liked what he heard about being a DO and decided to pursue his osteopathic medical degree from the Ohio University Heritage College of Osteopathic Medicine.

Read the complete profile of Dr. Samsa in the ACOI newsletter.

Read more about Dr. Samsa's experience as the sole physician managing patients on ventilators and oxygen in the COVID ward at his hospital, and how he dealt with burnout during the pandemic.