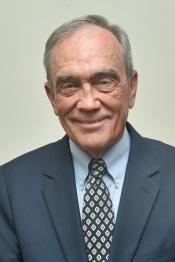 For more than 50 years, James R. Gaskell, M.D., has devoted himself to supporting the health and wellbeing of southeast Ohioans as a physician, educator, community leader and health advocate.

Dr. Gaskell earned his medical degree from the University of Pittsburg in 1964. He served as a U.S. Army Captain Flight Surgeon before completing his residency training at University of West Virginia in 1970. He went on to practice pediatrics in Athens, Ohio for the next 35 years. At O’Bleness Memorial Hospital (now known as OhioHealth O’Bleness Hospital), he served as chief of staff and chief of pediatrics. He has also worked as the Athens City School District physician and an associate professor of clinical pediatrics for the Heritage College of Osteopathic Medicine.

For the past 22 years, Dr. Gaskell has served as the Athens City-County Health Commissioner. In this role, he has championed a wide variety of health prevention and vaccination initiatives. His steadfast leadership has been instrumental in the county’s robust ongoing pandemic response.

Dr. Gaskell is an exceedingly engaged community member. He has served on the boards of Athens County Children's Services, Red Cross, Boy Scouts, Live Healthy Appalachia and Health Recovery Services, among other organizations. He has been named an Athens County Champion for Children (2021), a Red Cross Hometown Hero (2018), and the American Academy of Pediatrics Ohio Community Pediatrician of the Year (2005). He is also the current president of Athens County Medical Society.