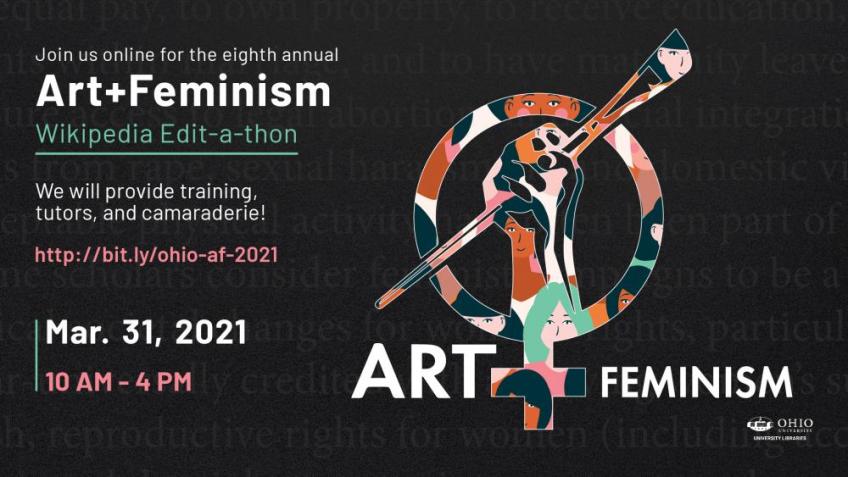 Ohio University Libraries invites everyone to participate in the third annual (but first-ever virtual!) Wikipedia Edit-a-thon on March 31, from 10:00 a.m. to 4:00 p.m. on Microsoft Teams. This event is being held with the support of the nonprofit group Art + Feminism and the Ohio University Women’s Center.

This year marks the eighth anniversary of Art + Feminism Wikipedia Edit-a-thons. Hundreds of Art + Feminism edit-a-thons are slated to take place in 2021, in hopes of continuing to teach people of all gender identities and expressions about the importance of diverse voices on Wikipedia.

Michele Jennings, art librarian at University Libraries, is the main organizer of the OHIO Wikipedia Edit-a-thon. She said that participants don’t need to have any previous experience with editing or Wikipedia to get involved.

“It is designed for everyone, from people with no Wikipedia experience to people who are confident–all are welcome,” she said. “You can come for any amount of time, even if you just want to [log in] and learn more about the organization.”

Librarians and volunteers will be available in breakout rooms to help with everything from adding citations to creating completely new articles. No background experience is necessary to participate in this event! A LibGuide will also be available on the Libraries’ webpage to help people get started with their research.

Participants are welcome to join the Teams meeting at any point during the day and stay for as long as they are able.

Jennings encourages participants to bring their own ideas of articles that need edited, updated or created, but that Art + Feminism and the Libraries will also identify articles that are in need of work. The articles will mostly focus on women-identified and non-binary artists, and feminism in the arts.

Wikipedia has been criticized in the past for its gender bias and the lack of diversity among its editors. A 2011 Wikimedia Foundation report showed that fewer than 13% of Wikipedia editors were women, which the then-executive director of the Wikimedia Foundation, Sue Gardner, attributed to an online culture that discouraged women from participating.

Organizations like Art + Feminism and The Black Lunch Table were formed in response to these findings, and made it their goal to increase diversity among Wikipedia editors. Edit-a-thons have become a popular way of increasing the visibility of the editing gender gap and getting more people involved by providing training and guidance.

Since it was founded, Art + Feminism has become an international organization, focused not only on increasing the number of women and non-binary editors on Wikipedia, but also on creating more coverage of the history of women-identified and non-binary artists, and feminism in the arts.

Art + Feminism states on its website that its mission is to work toward “building an equitable global community striving to close the gaps in content and editorial representation on Wikipedia, ensuring that the histories of our lives and work are accessible and accurate.”

Jennings said that students studying Women, Gender and Sexuality Studies, Art and Design, and Art History may be especially interested in the OHIO Edit-a-thon, but that all are welcome, and she encourages all members of the campus community and the public to attend.

“I want to emphasize that this year’s Edit-a-thon will not be recorded, and you don’t have to have your camera on [to participate],” she said. “We really want everyone to feel comfortable, even in this online space.”

She urges people to look into Art + Feminism’s Safe Space/Brave Space policy to understand how the Libraries will strive to make this year’s Wikipedia Edit-a-thon an inclusive event for all.

Jennings herself is a self-taught Wikipedia editor who has created pages for multiple artists and contributed to many different Wikipedia articles. She said that it’s empowering to take action and create articles that have immediate effects.

Art + Feminism and the OHIO Libraries share a goal of making information more inclusive and more accessible. Jennings said that both help to empower individuals as creators of information, as well as consumers.