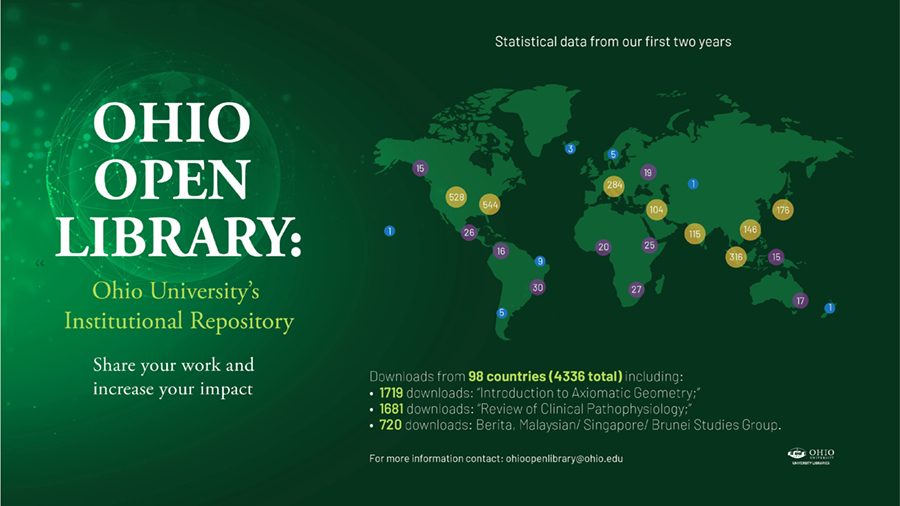 Amid the global self-isolation and economic uncertainties forced upon us by Covid-19, there is still light shining at the end of the tunnel as we move toward innovative approaches to the traditional way of doing things. One such innovation is University Libraries’ OHIO Open Library, an institutional repository created for the accessibility of scholarly, intellectual and creative work authored by the OHIO community—with no cost to the creator.

Strongly focused for academia, this openly-shared platform, commonly called Digital Commons, was developed by Berkley Press (Bepress) and is used globally by almost 600 institutions to showcase worldwide their scholarly and creative work.

“They [Digital Commons] made sure that this universe of data is well indexed in Google and Google Scholar [and] becomes visible worldwide pretty quickly,” explained Janet Hulm, assistant dean for Collections & Digitization Strategies.  “We think it is particularly important to graduate students. It will be a stable URL for them to use when they try to share their portfolios with potential galleries or with schools, if they are trying to get hired—or whatever they are working toward.”

Stepping faculty and students through that process, especially orchestrating the intake of new projects and making them as easy as possible to publish by the creator is Damon DeBorde, head of Metadata Services.

“Providing access to creative works produced by the Ohio University community is distinctively gratifying [to me],” said DeBorde who works alongside Hulm on the repository.

One such project surfaced in April during the Covid-19 lockdown. Hulm reached out to the College of Fine Arts about the Libraries’ OHIO Open Library after hearing colleague Duane McDiarmid describe how his students were installing their artwork for exhibits—a requirement for the completion of their master’s degree—but were not open to the public.

“Students were setting up in exhibit spaces, but it was just so they could take pictures and interact over the internet with their faculty advisors and thesis advisor,” said Hulm. “So, I said, ‘I have an answer for you.’”

As an MFA artist, thesis exhibitions are equivalent to the professional publications of research in other courses of studies.

“It [an exhibition] is considered research, and it is prepping them for a professional art career. Even if a student was getting an MFA… to teach in higher education, an exhibition is still part of their required research,” explained Courtney Kessel, instructor and gallery director of Ohio University Galleries. “It is the beginning stages of what their professional art career will continue to be.”

According to Kessel, the artwork manifested by each individual artist is, in fact, part of their research. As witnessed by MFA graduate student, Quinn Hunter, who was heavily engaged in research for her thesis, “I hear you now, I see you then,” one of the most recent acquisitions to the OHIO Open Library.

According to the abstract, her work “serves to uncover, elevate and challenge the erasure of the labor of enslaved African American women in the antebellum south from the contemporary architectural spaces and landscapes.”

Hunter, a third-year MFA student in sculpture + expanded practice said, “I looked for [research in] census information, architecture information—and as much specific information as I could get.”

As MFA candidates, like Hunter, were culminating the installation of their exhibits and preparing to defend their work—everything shut down.

“Here at OHIO, they [graduate students] had three years of work, research, sweat and tears, and labor in this final exhibition—which is the qualifying earmark if you pass or fail, and whether you get your MFA or not,” said Kessel. “You have to install your thesis work, defend it, and then pass—before the exhibition is even allowed to open to the public.”

The sense of accomplishment that accompanies the dissemination of any creative work is especially true after three years of work toward a Master in Fine Arts.

“Placing the images and work into the OHIO Open Library database felt like my work had [finally] been put out into the world, more than [just] my own inner circle of people I know,” said Hunter.

Although this open-access platform is still relatively new to the OHIO community, its worldwide data and recorded “hits” speak volumes for its beneficial use.

“That is why when you look at ‘Introduction to Axiomatic Geometry’ by Mark Barsamian [published by the Libraries in 2018] there are hits all over, especially in Asia, and it is just because people are finding it. We can get [even] more break downs on the back end to see… where they were located, and what they were looking at—it is fun,” Hulm said with a laugh.

The OHIO Open Library is just one more innovative approach to help scholarly and creative work become discoverable, as witnessed by Barsamian, who finished an early draft of his geometry textbook years ago, published the work on his website, but had  no ability to track usage data—until publishing with the Libraries.

“I think, it only behooves everybody to have their work in the repository,” said Kessel.  “I think, it is terrific!”