Violet Lenore Patton (1916-2022) is best described as a bold, fearless, and completely selfless individual. Her lifelong dedication to education has changed the lives of countless students as well as her peers, supervisors, and colleagues. Now, as she leaves her legacy with The Gladys W. and David H. Patton College of Education, it is apparent how rare such an incredible educator like Dr. Patton is, and just how large of an impact she has had on the field.

David H. and Gladys W. Patton were long-standing supporters of public education[PDF]. In 1951, Dr. David H. Patton was selected as the Superintendent of the Syracuse Public School System, for a 10-year term. He was also the author of textbooks on spelling instruction, including titles such as 'Word Mastery Speller'. Gladys W. Patton was also an educator and worked with her daughter, Violet, to write a series of textbooks on etiquette for children.

"As President of the Ohio Superintendents Association, David H. Patton wrote and presented the first education bill to the State of Ohio legislature meeting in Columbus, Ohio, and got it passed. It was the first time the legislators recognized all educators with an extra one month's salary. The State of Ohio has awarded him with a gold-sealed Permanent Superintendents Certificate." Writes Violet L. Patton in a personal letter, to Dean Emerita, Dr. Renée A. Middleton, remembering her father.

Born in 1916 in Williamsburg, Ohio, Dr. Patton grew up surrounded by educators. Throughout her childhood, her father, David Patton, worked as a teacher, principal, and superintendent in school systems across the state. “In my family, we were educators, demonstrators, writers, researchers, and speakers. It’s hard to separate us,” Dr. Patton said during an interview with Dean Emerita, Dr. Renée A. Middleton, in late November 2010. Dr. Patton grew up following in her parents' footsteps with an interest in education, but she also had a vibrant passion for art. The family lived in many areas across the state, including Toledo, Bellevue, and Sandusky. While Dr. Patton did not have any formal art training growing up, she had a knack for crafting and art from a young age. To perfect her art, she created designs for accessories and clothing for herself to wear, and immersed herself in the art world, including music. 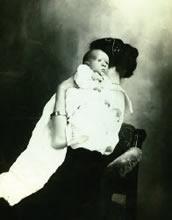 While Dr. Patton received a Bachelor of Science degree in education from Ohio University, her educational journey did not start in Athens. She began her freshman year of higher education at Oberlin College in Oberlin, Ohio. Soon realizing Oberlin was not for her, she began looking at other options. After much consideration, Dr. Patton’s father convinced her to take a look at OHIO. What really drew her to the university was a professor named Edna Way, a renowned designer and instructor whom Dr. Patton met while visiting the campus. After receiving her undergraduate degree in Arts Education from OHIO, she taught at Wapakoneta Public Schools for four years, and each summer would travel to New York City to pursue her dream of becoming a couture designer. “The very minute school was out, I got on a train to New York City,” she said. “I went to Traphagen School of Costume Design. 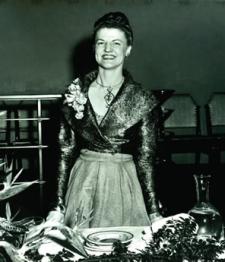 It was a big thing every time you opened up Vogue, there was this big ad about Traphagen and so I thought, ‘that’s the place to go,’” she said. She received a 180-hour diploma from the Traphagen School and later took courses at the renowned Parsons School of Design in New York City. Dr. Patton then went on to receive a master’s degree in Fine Arts and Fine Arts Education at the Teacher’s College at Columbia University, where she graduated summa cum laude. No matter where she went, Dr. Patton always had a passion for art. “Everything is interrelated to art…poetry, drama, dance and so on,” Dr. Patton said. That passion, and a dedication to education, led her to achieve amazing things in her career as an educator and artist.

Even before she graduated, Dr. Patton was pursuing her love of arts and education. In 1936 she illustrated a series of spelling books for a publishing company in Columbus and in 1937 illustrated arithmetic textbooks for a publishing company in Indianapolis. Right from the start, Dr. Patton brought energy and innovation to her teaching. In her time as a teacher, she continually worked to revitalize and enhance education, specifically arts education. At her first job with Wapakoneta Public Schools, she developed training programs for art teachers while she worked in the Wapakoneta and Alliance school districts, and later shared that training with future educators as an assistant professor at Miami University. After attending Columbia, Dr. Patton got a job at Rutgers in the art department, teaching costuming and interior decorating. One of Dr. Patton’s proudest achievements came during her time as president of the Ohio Education Association, when she organized the “Unifying Experiences in the Arts” conference in 1950 in Cincinnati, Ohio, at the Netherlands Plaza Hotel. The event, which focused on arts education, garnered more than 1,000 attendees and surpassed everyone’s expectations. Violet Patton maintained a dedication to her community throughout her career. She spoke at many conferences, sharing her knowledge of arts education. Through her work illustrating textbooks, she has helped children learn and appreciate arts and arts education. In numerous letters from supervisors and peers, Dr. Patton is described as hardworking, energetic, and talented. 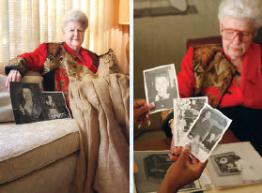 Throughout the years, Dr. Patton has kept in touch with the people who made her experience at OHIO a lucrative and inspiring one. While many of them have passed away, Dr. Patton fondly remembers the interest they took in her and the impact they made on her career, allowing her to pay it forward to those she encountered. Dr. Patton credits Ohio University with preparing her for her career in education and remains a proud Bobcat. 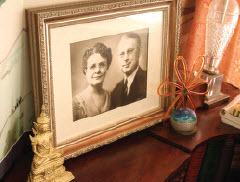 The Patton family had a connection to Thomas McCracken, after whom the College of Education building was named at one time. Both of Dr. Patton’s parents attended OHIO. Dr. Renée A. Middleton, Emeritas Dean of The Patton College of Education, can attest to Dr. Patton’s love of OHIO. “Dr. Patton has always been an independent and forward-thinking person. Her lifelong commitment to education continues to inspire us daily at The Patton College, and we are honored and blessed to have her support,” Middleton said.

In early 2010, Violet Patton gave a joint gift of $13.3 million to Ohio University College of Fine Arts and the College of Education to create the Violet L. Patton Center for Arts Education. A few weeks later, she committed an additional $28 million to the College of Education, resulting in the renaming of the college to The Gladys W. and David H. Patton College of Education, named after her parents. This gift will be used for renovations in Patton Hall, formerly McCracken Hall, as well as to fund scholarships and professorships and redesign the curriculum. Dr. Patton’s hope for The Patton College and the Violet L. Patton Center for Arts Education is to show the interrelatedness across different aspects of arts and education. She envisions interactive events and conventions to showcase and share art with the community. Patton Hall features a special section of the building dedicated to the Pattons and showcasing relics of their history. “We are incredibly humbled by Dr. Patton’s gift to our College and are dedicated to ensuring that the gift will benefit first and foremost our students, who are the future of education,” Middleton said. Her philanthropy is truly transformational and marks the largest gift given to a college of education by a single donor. The Patton College of Education is only the third named college at Ohio University. Dr. Patton’s dedication to education will always be remembered. The Patton Legacy stands for and will always remain dedicated to improving and innovating education.

Under the leadership of John Gordy, two courses of study were established. One prepared the secondary academy teacher, while the other prepared the elementary teacher. The curriculum included courses such as the Science of Education, the National Perspective on Education, Theory of Concentration, Education Reforms, and Philosophy of Mind. Thirteen individuals earned the first degrees and certificates offered in 1891.

The curricula for teacher education at Ohio University date back to earlier days, with OHIO's beginnings as an academy. Academies - common in the 19th century as bridges between common schools and colleges - typically offered three curricula: Classical, for college preparation; English, as a finishing/vocational school; and Normal, for teacher education. The first Normal course at OHIO was created in 1831, with a Model School being added in 1837. According to Robert Wynn Frey, who wrote his doctoral dissertation on the history of Ohio University's College of Education, the Normal course and Model School comprised the first teacher preparation program of its kind at a collegiate institution in the United States.

The Normal courses and Model School reached their peak in the 1840s, with more than 20 students enrolled in Normal courses and 60 students involved in the Model School. It was at this same time, however, that the University hit hard financial times and was forced to shut its doors for a period. By the time OHIO reopened, interest in Normal education had waned and was phased out of the curriculum altogether by the 1860s. Interestingly, this also was around the same time that the Ohio School Law of 1853 set up a system of public schools throughout the state, but the law did not provide for teacher training. Private schools stepped into the breach to run institutes or short courses to train teachers.

In the years following the Civil War, OHIO was struggling with increasing debt, which was compounded by state-mandated free tuition for veterans and decreasing paid enrollment. In an effort to bring in more students, the University instituted Teachers' Classes. After some initial success, enrollments were again flagged. The content-based focus of the Teachers' Classes did not appeal to practicing teachers and students. With the help of former school superintendent and OHIO trustee John Hancock, it was determined that a focus should be placed on pedagogy and psychology. Hancock and Ohio University President Charles Super enlisted the help of OHIO alumni and state House member William Matthews to have funds voted by the state in 1886 to establish a Normal Department at Ohio University, Ohio's first teacher preparation program.

On September 9, 1902, the State Normal College opened its doors to aspiring teachers. In 1907, Ohio University became the home of the state's first Kindergarten, and in 1908, Ellis Hall was completed, which served as Ohio's first state building dedicated to teacher education. Gordy Hall opened in 1912 followed by Rufus Putnam Hall in 1926, both of which served as training schools for prospective teachers.

Teacher Education at Ohio University has always been grounded in practice, so the buildings were used not only for teacher training but as schools for children. The top floor of Ellis Hall housed John Hancock High School and served as a training ground for secondary education beginning in 1917. Likewise, Rufus Putnam Hall became the Rufus Putnam School, which served as a laboratory for students in elementary education from 1926 to 1972.

As part of Ohio University's first realignment in 1935, the State Normal College became OHIO's College of Education. In 1948, Dr. George E. Hill established the Department of Guidance, Counseling, and Student Personnel, and in 1997 the Department of Educational Studies was founded, expanding the College's departments to three.

On January 11, 2010, former President Roderick J. McDavis announced a private gift of $13.3 million from 1938 alumna, Ms. Violet L. Patton, to benefit arts education at OHIO and provide for the establishment of The Violet L. Patton Center for Arts Education. Just three weeks later, former President McDavis announced a second transformational gift that would forever change the face - and name - of the College of Education.

Also in 2010, the national nonprofit Council for Advancement and Support of Education awarded Patton the James L. Fisher Award, which “celebrates individuals, organizations, foundations, corporations or publications for their extraordinary impact on education nationally or globally, beyond service to a single institution or state,” according to the CASE website.