The Libraries Celebrates 50 Years of Alden with OHIO Exhibit

To commemorate Alden Library’s 50th anniversary this year, a new exhibit was curated to show off the items that make Ohio University Libraries unique.

The exhibit, titled “Only at OHIO,” opened across from the fourth-floor entrance of Alden Library on Sept. 2 and will run through the end of the fall semester. The exhibit was curated by Bill Kimok, Michele Jennings, Stacey Lavender and Miriam Nelson, but was a collaborative effort in the Libraries as the staff was asked to recommend materials that they think are special to Alden. Nelson says the curators chose the items that would help to best tell the story of the Libraries while still being related visually. 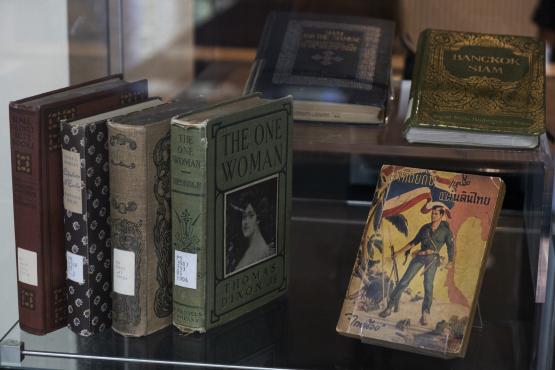 “One of the great byproducts of curating the exhibit this way is how it demonstrates the great collaborative work we do at the Libraries every day,” said Jennings.

This exhibit is different from previous exhibits mounted in the Libraries because it contains a variety of formats and items that are being showcased. It spans from illuminated manuscript leaves from the Mahn Center for Archives and Special Collections to rare Thai-language books and an ostrich egg donated by the Embassy of Botswana. The exhibit also features graphic design history books by an ART 3510 course as well as local historical newspapers and a plaque commemorating the Libraries’ contributions to the global library cooperative OCLC, a nonprofit organization that works to make information more accessible and useful to people around the world.

“A lot of these items might seem ordinary because they are from our circulating collections, but we are deliberately highlighting those materials to show the role that they have played in the history of Alden Library, and to make the point that they are as [much] worth celebrating as the rare materials that they are being exhibited alongside,” said Jennings. 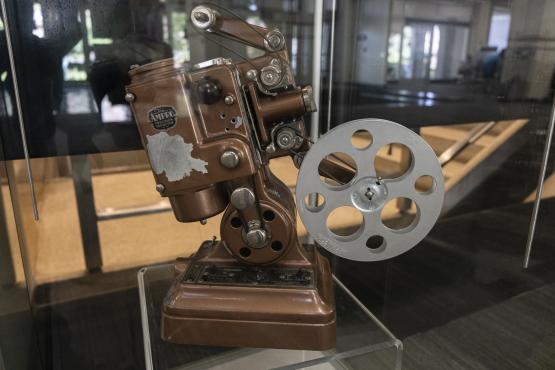 The Libraries staff was asked to select three to four items from their collections that were important or showed the variety of things that the Libraries collects for university research. Some of the items featured are gifts from alumni, such as the Lynn Johnson Collection of photographs from renowned OHIO alumnus Lynn Johnson, while others were purchased to support courses taught at Ohio University.

“For the 50th anniversary of Alden, we wanted to show the breadth of the collections housed in this building,” said Nelson. “Everything exhibited was acquired by the Libraries over its 200-year [plus] history.”

Vernon R. Alden Library, named after Ohio University’s 15th president who spearheaded the construction of the new library, opened its doors on May 23, 1969, in the heart of the OHIO campus. The Library is an impressive seven stories spanning the size of a football field, an upgrade from the previous OHIO Library housed in the current Chubb Hall.

Today, Alden Library is one of the top 100+ research libraries in North America and is home to millions of print and electronic volumes throughout the Libraries’ collections.

“The cool thing about the exhibit is it’s more about how things all came together [rather] than any individual piece in there,” said Lavender. “I hope that [students] take away the breadth of subjects that [the Libraries] cover [and] all the different kinds of things that we have. It’s not just books, although we have some really amazing books; hopefully, it makes people think that there’s something there for everyone.”

Nelson says that her favorite item in the exhibit is the Athens County Press and Nelsonville Tribune, a Nelsonville newspaper, published in October 1971.

“We only have one page showing, but looking through it was just really fun to see what was going on locally in the area when Alden was being built,” she said.

According to Nelson, the most important thing to look for is the variety of formats being showcased; it’s not just books, but objects, films and papers.

“I’d like people to look at everything,” Nelson said with a laugh. “[But] that’s the nice thing about the exhibit, that it’s very varied in its content.”

The Libraries staff encourages anyone who may be interested to stop by the exhibit and view the items on display.

“I hope that this is a way for [students] to connect a little bit to [Alden’s] history and learn a little bit more about the place that they’re going to be spending a lot of time during their college career,” said Lavender.