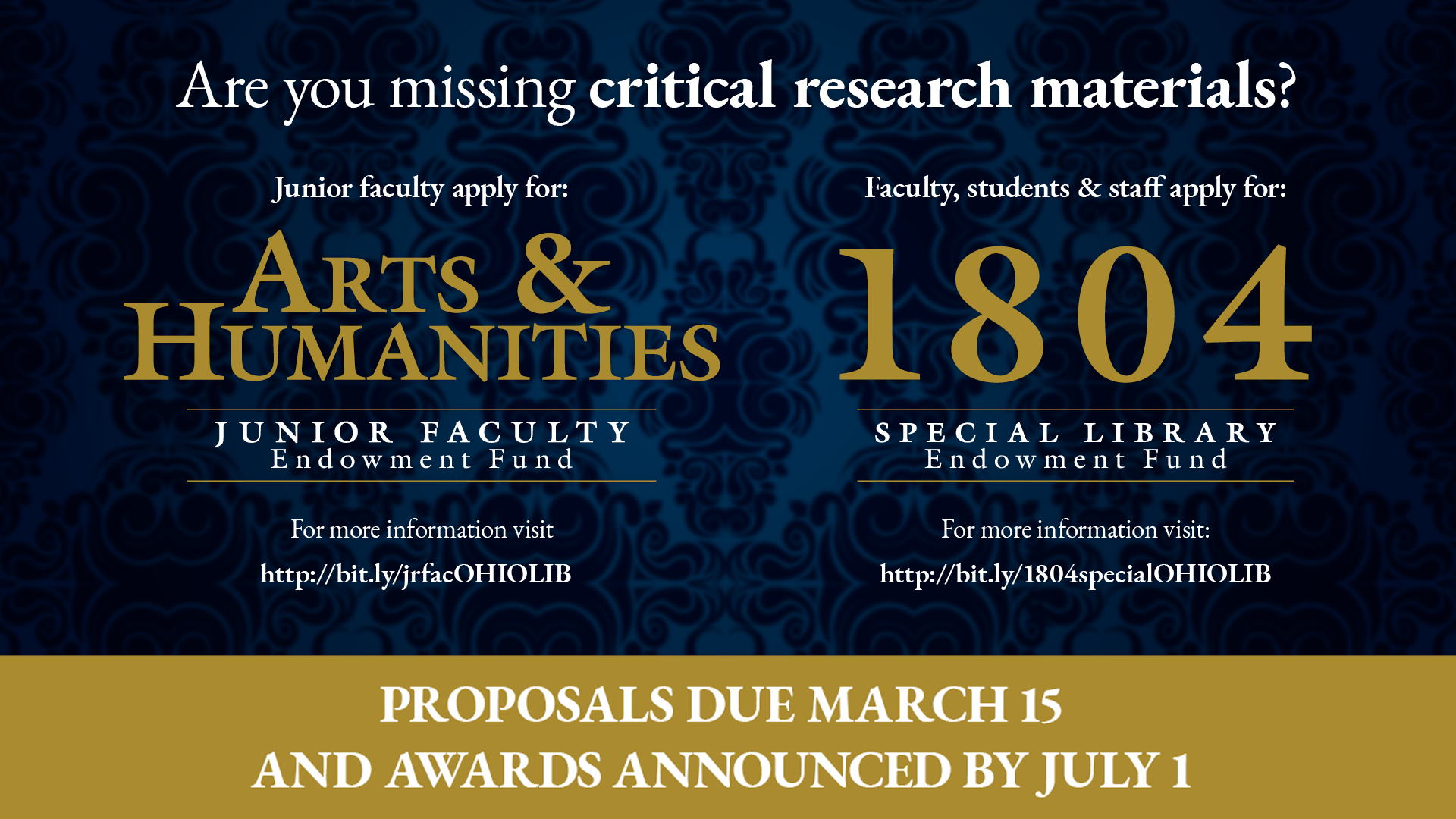 The Ohio University Libraries is currently accepting applications for the Libraries’ two endowment funds for 2021: the 1804 Special Library Endowment Fund, which is open to all students, faculty and staff, and the Arts and Humanities Junior Faculty Endowment, which is open to tenure-track faculty looking to further their research. The final date to submit an application for either fund is March 15, 2021. The recipients will be announced on July 1.

Each year, faculty, students and staff have the opportunity to apply for the Libraries’ endowment funds to purchase specialized collections and rare or valuable items that will support faculty and student research and learning. Established in 1979, the fund has enabled University Libraries to develop distinctive collections that can be used by the OHIO community.

“I think grants like this benefit the Libraries because they allow us to work across the aisle, [with] faculty and librarians working together to become…frontline activists for student engagement,” said Bayyinah Jeffries, one of the recipients of last year’s 1804 Special Library Endowment Fund. “It gives us an opportunity for collaboration and academic exploration beyond the classroom.”

Those interested in applying for funds should speak to their school or department’s subject librarian. For additional information on the Libraries’ endowment funds, or to submit proposals, contact Janet Hulm, assistant dean for Collections and Digitization Strategies, at hulm@ohio.edu.

Last year, seven faculty and staff were awarded funds to purchase resources that ranged from a manuscript Qur’an to paleogeographic maps.

Dr. Loren Lybarger, associate professor in the College of Arts and Sciences, sought to use the 1804 Fund to enhance the collection of religious texts in the Libraries’ rare book collection. He studies and teaches courses on Islam and has also started and administered the Islamic Studies program for undergraduates.

Lybarger was awarded the Libraries’ endowment funds for the purchase of an original manuscript Qur’an and a facsimile of a fine Qur’an for use in his studies and teaching. The religious texts will complement the 13th century illuminated manuscript Bible that is currently in the Libraries’ rare books collection.

“Instead of having to simply show an online image, I can actually take [students] to the Libraries, and we can interact with a physical object, which is far more real and direct,” Lybarger said. “Students aren’t going to remember watching a video online, but they might remember having gone over to the Libraries and holding this medieval manuscript and being taken aback by the beauty of it.”

He also pointed out that the manuscript can be used beyond just Islamic studies courses.

“There’s a lot one can learn artistically, as well as from the standpoint of the humanities and historical studies, from this text,” Lybarger said.

“I taught a new class last year…called the History of Black Women in Popular Culture,” she said, “and we thought this would be an excellent opportunity to enhance those resources for this particular class, but also for other African American classes as well.”

“I look at these materials as a way for students to engage in the history and culture of people of African descent through other mechanisms outside of lecture,” Jeffries said. “It’s important that the students have first-hand accounts so that they can see what people were grappling with in [each] time period.”

Dr. Jennifer Shadik, an assistant professor in the College of Health Sciences and Professions, also placed an emphasis on the importance of firsthand experience and accounts when learning about a subject. Shadik teaches graduate classes in social work and used some of last year’s 1804 Special Library Endowment Fund to purchase videos for her classes.

Shadik said that the films gave her students a better understanding of the experiences of people who have lived with trauma and empathy for the people that they may work with in the future.

“These videos help [students] think about how they would respond if they were in that situation and if these were their clients, so I think that is really helpful,” she said.

Dr. Alycia Stigall is a professor and the department chair of geological sciences in the College of Arts and Sciences, as well as a well-published paleontologist. In 2020, she applied for the Libraries’ endowment funds to purchase three paleogeographic maps, which show the positions of the continents and tectonic plates as they would have looked millions of years ago.

“One thing that is really important to understand when you think about the history of life on this planet is the position of where the continents and oceans have been at times in the past,” Stigall said, adding that the maps could be used by faculty across the University in departments like geography and biological sciences, as well as the College of Osteopathic Medicine.

Stigall originally intended to purchase just one map to use in a paper that she was authoring, but the 1804 Special Library Endowment Fund enabled her to purchase the whole collection of maps, which she has already begun using in her teaching and for other research projects.

“Overall, the acquisition of a large map collection rather than a single map…opens opportunities for students to engage with this kind of Earth history and data analysis in ways that they really couldn’t before,” she said.

Also purchasing a collection of materials was lorraine wochna, subject librarian for film, theater, English and African American studies at University Libraries, who was awarded funds from last year’s 1804 endowment to purchase 12 documentaries for the fall 2020 and spring 2021 Sustainability Film Series.

The film series, which is held every semester, offers those in the OHIO and Athens communities the opportunity to watch current documentary films about various subjects related to sustainability. Films for fall 2020 included “Mossville: When Great Trees Fall,” which told the story of the sole remaining resident of a town bought up by industrial plants, and “The Condor and the Eagle,” which followed several indigenous activists as they traveled the world and sought environmental and social justice.

In her proposal for the 1804 Special Library Endowment Fund, wochna mentioned that in addition to purchasing the materials for screening at the Athena Cinema, “We endeavor to make all DVDs available for community borrowing, including public performance rights for members of the Ohio University community.”

Dr. Daniel Dennis worked with wochna and Carla Williams, music and dance subject librarian, to purchase materials related to musical theater. Dennis, an assistant professor of voice and movement in the School of Theater, said that the new musical theater Bachelor of Fine Arts program has made some big changes in the theater school already.

“We knew starting this program that there were a lot of materials that we did not have,” he said, “So this 1804 [Special Library Endowment Fund] was an ideal way to add complete collections that we would not otherwise be able to acquire.”

Dennis authored the proposal and worked with several colleagues to put together a list of materials that would truly supplement the musical theater program, including 30 productions on video from London’s National Theatre, licenses to online classes in costume and prop design and construction from The Stan Winston School of Character Arts and various resources that include scripts, scores, books and DVDs. Dennis emphasized the importance of having relevant materials for not only the musical theater majors, but the School of Theater as a whole, the School of Music and Dance, and the English department.

“One of the main focuses of this musical theater program is that it is a current program, meaning that we’re not only focusing on ‘Golden Age’ musical theater, or the theater that we may typically think of,” Dennis said, adding, “I think it's crucial for us to be offering an education to our students that is very forward looking.”

Finally, Dr. Peter Brobst, an associate professor of history, was also awarded funds from the 1804 Special Library Endowment last year for the purchase of The Persian Gulf and Red Sea Naval Reports, a 15-volume set that will complement other historical collections held by the Libraries.

In his proposal, Brobst said, “The issues covered [in the volumes] range from naval diplomacy, counter-piracy, and anti-smuggling operations to bases and logistical arrangements as well as plans and operations against great power rivals. The period covered (1840-1960) corresponds to the era of British naval supremacy in the Indian Ocean.”

Brobst plans to use the records to further his ongoing research and support graduate students, who he said over the years have used many of the Libraries’ collections for their master’s theses.

The Libraries hopes to continue adding diverse materials and resources to its collections, and would like to encourage all interested students, faculty and staff to apply for funds in 2021.